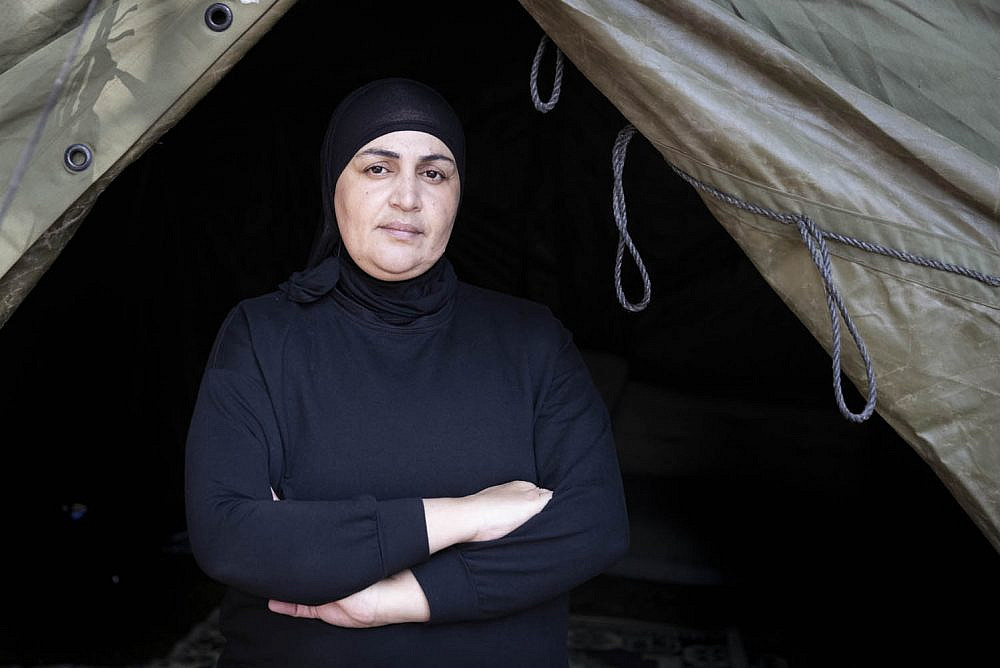 Farida Najar, a Palestinian single mother of four, seen outside her tent, which she erected in a public park in Jaffa in protest of racialized gentrification and rising rents in the city, November 17, 2021. (Oren Ziv)

Farida Najar has been waiting to receive public housing in Jaffa for four years. But the Palestinian single mother of four can no longer afford the rising rents in the city she was born and raised in. Last week, she moved her family into a tent at a public park, in protest of the racialized gentrification that she says is pushing Palestinian residents out of Jaffa.

“I moved to live in a tent because I don’t have a house to live in,” Najar told +972 Magazine. “All I want is an apartment. The state wants to make us leave to other cities like Lydd or Ramla. This is a racist policy, and we won’t stay silent about it.”

Days after Najar set up her tent, other single mothers facing similar challenges began to join her. By Wednesday, the small park on Yefet street was filled with tents.

At first, the 10 families insisted on staying in the park with their children, despite the municipal eviction order issued against their camp. Not even heavy rains deterred them. Dozens of Palestinian and Israeli protesters attended vigils throughout the week to support the single mothers’ struggle, including MKs Ayman Odeh, Sami Abu Shehadeh, and Ofer Cassif.

But after a Sunday meeting with the Mishlama, the local branch of the Tel Aviv municipality that deals with issues concerning Jaffa’s residents, some of the families agreed to leave the park immediately in exchange for social and financial aid — though they were not offered permanent housing solutions. By Monday, at least six of the women signed what they described as “better agreements,” and left the protest camp. 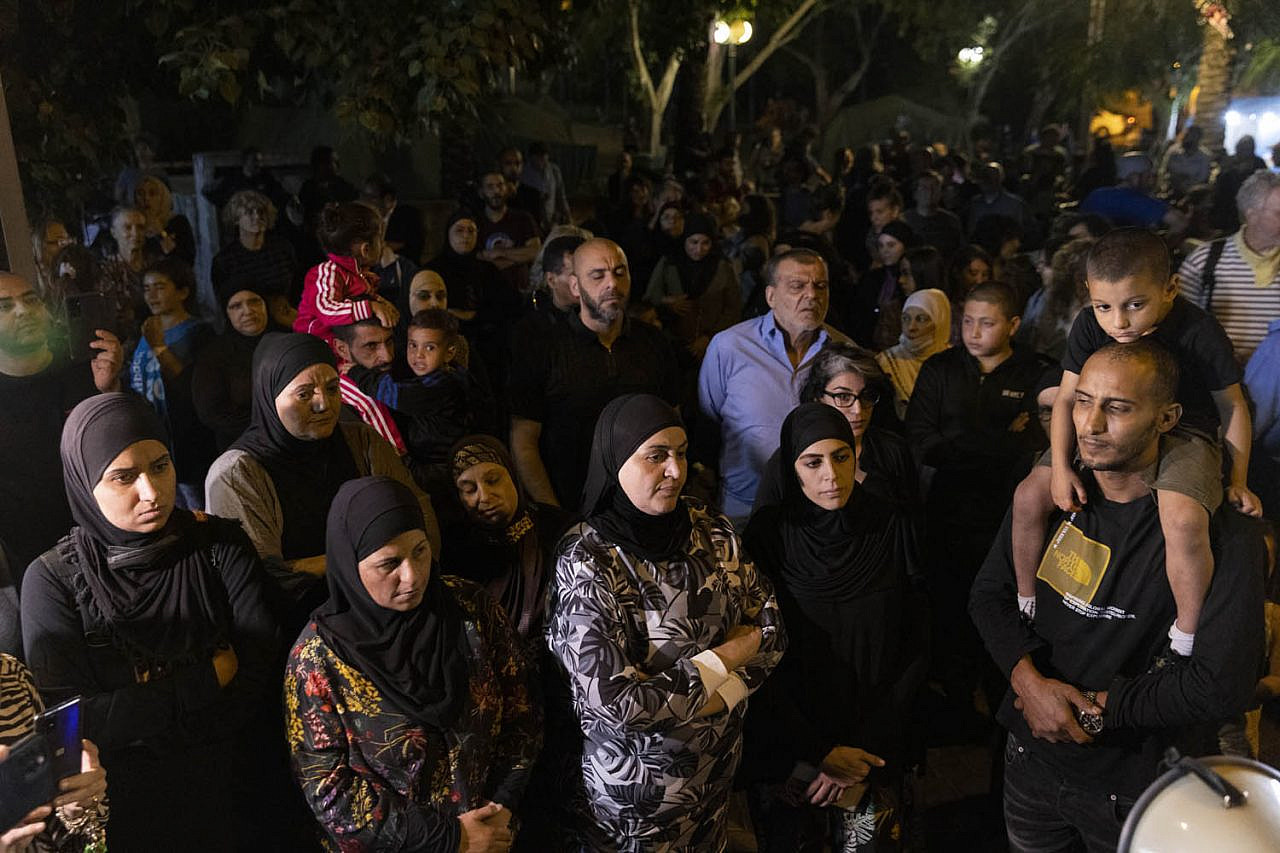 Dozens of protesters seen at a vigil in support of a group of single mothers who erected tents in protest of racialized gentrification and rising rents in the city, Jaffa, November 17, 2021. (Oren Ziv)

The women who decided to stay, including Najar, moved to sleep in the park’s public shelter, after municipal officers arrived to remove any remaining equipment Tuesday morning.

“The protest camp was erected by families from Jaffa, mostly single mothers, who are experiencing real hardship as a result of years of neglect in the government’s public housing policy,” a Tel Aviv-Jaffa spokesperson told +972 Magazine. “The tents were willingly taken down, following dialogue between the women, the Jaffa Acting Committee, and representatives from the municipality, the goal of which was to find solutions for the families and end the protest in a respectful, nonviolent manner.” 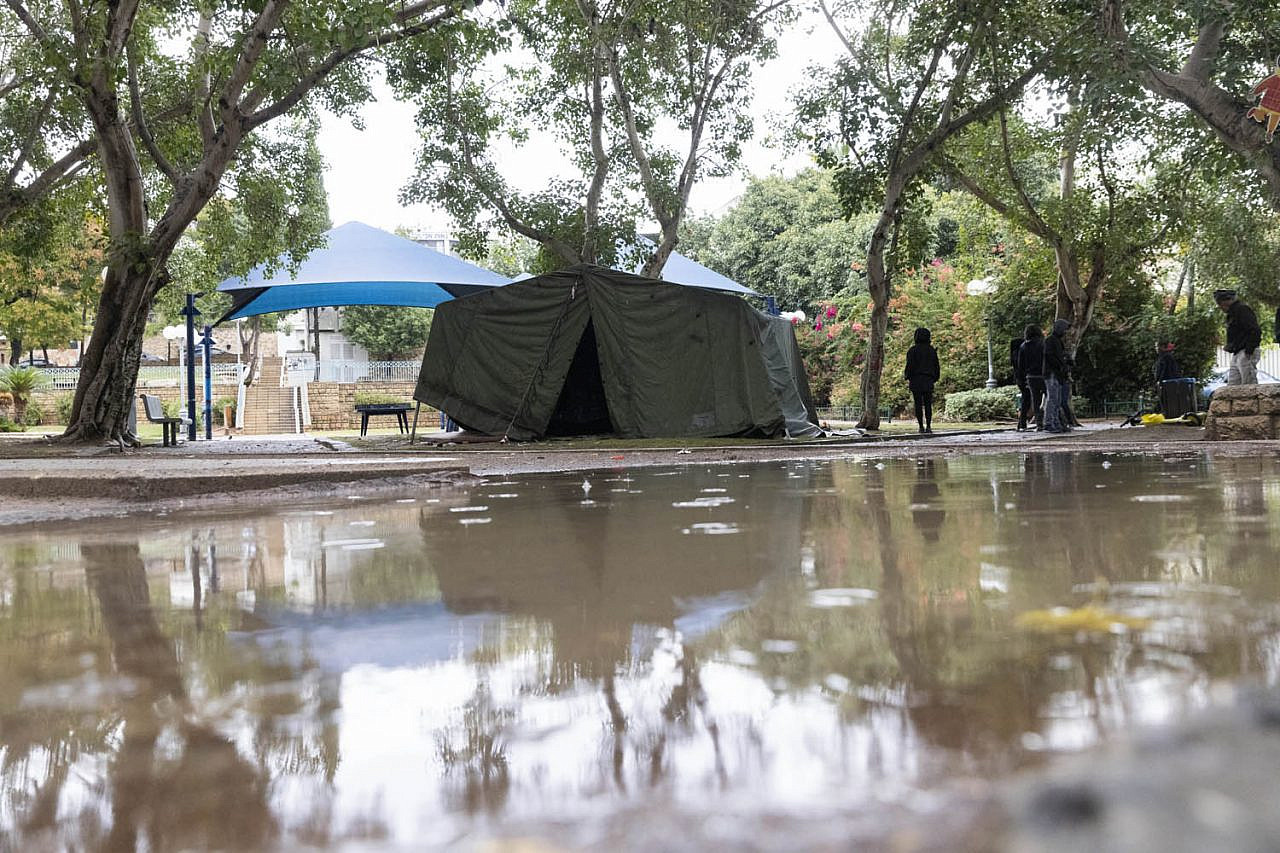 A group of single mothers erected tents at a public park in Jaffa, in protest of racialized gentrification and rising rents in the city, November 20, 2021. (Oren Ziv)

The spokesperson added that representatives from the municipal welfare services and the Jaffa Acting Committee will be meeting with the women every couple of weeks to follow up on their cases.

“Every protest is legitimate, and the municipality encourages residents to actively participate in the democratic game. With that, setting up a camp in a public space has a time limit, regardless of the legitimacy of the cause,” the spokesperson added.

Even though the families are eligible for public housing, years of flawed policies have made it almost impossible to secure an affordable apartment in the city. The subsidies that they receive from the state in the meantime are not enough to cover rent in Jaffa, they said. 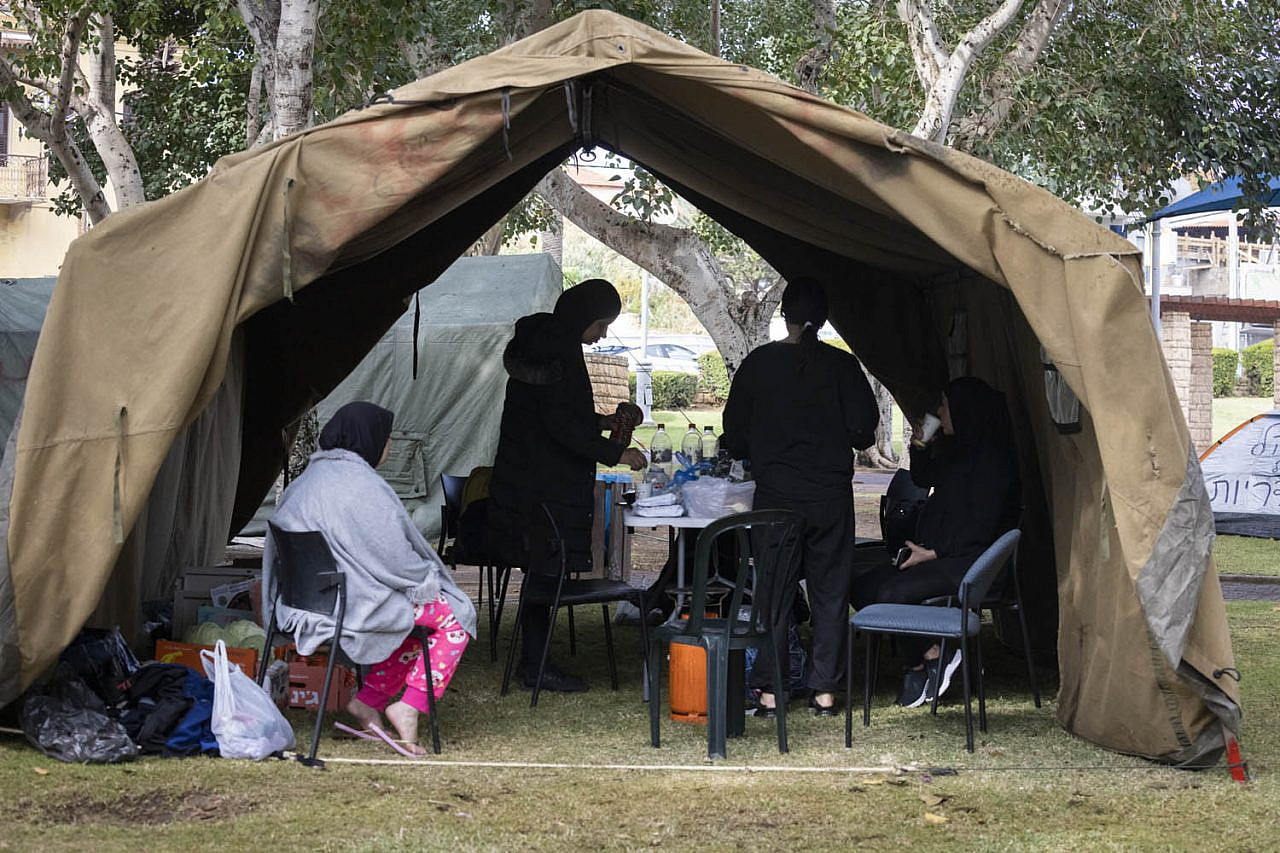 A group of single mothers erected tents at a public park in Jaffa, in protest of racialized gentrification and rising rents in the city, November 19, 2021. (Oren Ziv)

The shortage in available public housing apartments in Tel Aviv in general, and specifically in Jaffa, means families often wait for years before securing affordable housing. According to a state comptroller report from 2019, people who are eligible for public housing had to wait 31 months on average to receive an apartment, and in central Israel the waiting time can be even longer.

“Our parents had debts and couldn’t help us, and now we can’t help our children,” Najar lamented.

One of the women who joined Najar is Fatima, a mother of four, who preferred not to publish her last name. “We are 8 families with 27 children, we live as one big family,” she said. “We are here because we don’t have a roof to live under with our children. The rent is expensive in Jaffa, and the assistance we get from the state does not allow us to live in dignity.” 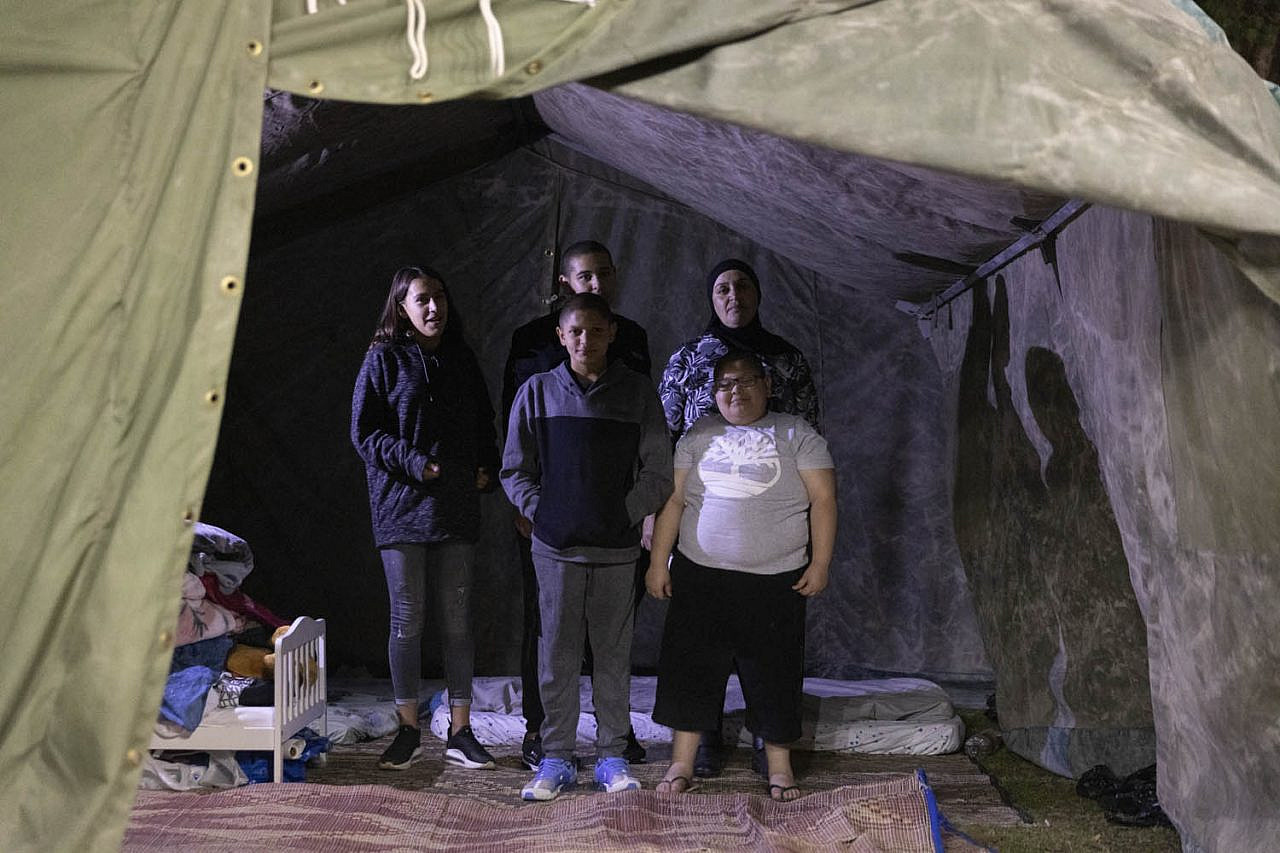 Farida Najar, a Palestinian single mother of four, seen with her children inside the tent she erected in a public park in Jaffa, in protest of racialized gentrification and rising rents in the city, November 17, 2021. (Oren Ziv)

“At first, the children thought we went camping, but after a few days it became hard for them,” Fatima continued. “With the rain, they are tired, but we will stay here till we receive our rights.”

The housing crisis that Palestinian citizens face in Jaffa has a wider historical context. After the 1948 Nakba, the Palestinian residents who remained in Jaffa were concentrated in the Ajami and Jabalia neighborhoods, where many received “protected status” as tenants in houses they owned, or that belonged to Palestinian families who became internally displaced or refugees. Those houses were registered as “absentee” properties, which were eventually transferred to the state’s Development Authority.

In recent years, luxury projects have dominated the coastal city’s landscape, and public housing companies have been selling the buildings to private investors. This has made it even harder for local Palestinian residents to rent or buy property in Jaffa.