Instead of imprisoning stone throwers for 20 years, Israelis should push to end the policies that sow despair among Palestinians. 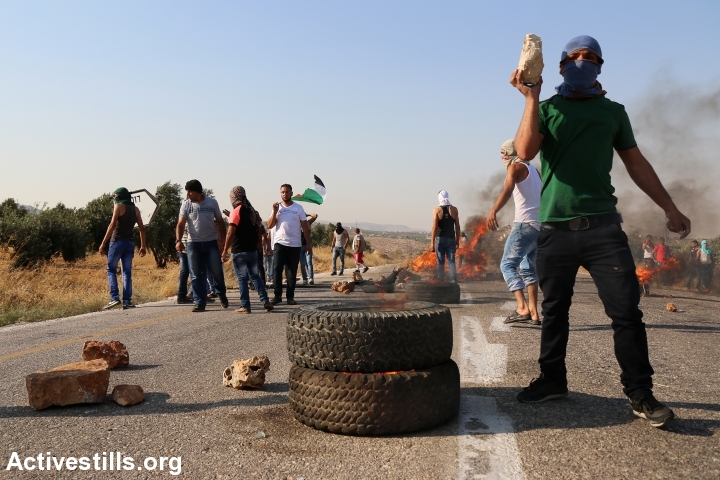 In my early years as an activist and lawyer, during my first ever television interview in the field, I made the fatal and very amateur mistake of not talking in “sound bites.” When asked to talk about stone throwing at demonstrations in Bil’in, I provided an elaborate, well-thought out response describing the complex dynamics and context of stone throwing in Palestinian demonstrations across the West Bank. But that evening, my primetime debut included only one half-sentence, apparently edited to suit the needs of the station: “It is true that stones are sometimes thrown in demonstrations in Bil’in.” I was mortified, to say the least.

This article aspires to right the wrong perpetrated by a TV station that shall remain unnamed. (While they apologized for distorting my words, they never issued a correction.)

Last month the Knesset passed a bill amending Israel’s penal code, entrenching in the law more robust definitions that attach severe penalties for throwing stones at security personnel and their vehicles, as well as at civilians and their vehicles. Prior to this law there were two ways that stone throwers were criminally charged, neither of which was satisfactory to the legislators. Some stone throwers were charged with obstructing a police officer and/or intentionally sabotaging a vehicle, which lawmakers alleged was not commensurate with the gravity of the crime.

The amendment was proposed as an attempt to circumvent the issue of proving mens rea (criminal intent) — one of the basic principles of criminal law in a democratic country. The amendment creates a new offense, placing throwing stones (or other objects) or firing at a police officer or police vehicle under the category of obstructing a police officer or intentionally sabotaging a vehicle, and is it punishable by up to a five-year sentence. In addition, a graduated offense — firing a weapon or throwing stones or objects at civilian vehicles in transit in a way that endangers human life or the vehicle itself — was added, carrying a penalty of 10 years’ imprisonment. If intent is proven, that sentence can climb to 20 years.

Let’s set the record straight this time. There are three major contexts in which stones are thrown in Israel/Palestine, but only two of them seem to be the target of this law. The first is the phenomenon of throwing stones at moving vehicles in East Jerusalem and the West Bank, be they military/police or civilian. It must be noted that the law will not apply to stone throwing in the West Bank, since unlike East Jerusalem, Israel has not yet annexed it. But not to worry, stone throwing already carries the same, and in some cases even harsher penalties in the West Bank than those included in this amendment; the only difference is that military courts regularly deny due process rights to Palestinians tried therein.

The second context in which we find stone throwing is protests and clashes between the police and Palestinians under occupation in East Jerusalem. And as I told the interviewer, stone throwing against security forces does not exist in a vacuum. It is a form of violence (it goes without saying that I am opposed to all forms of violence), but it is also a well known protest tactic used all over the world – from Brazil to India to the United States – and is generally used as a response to top-down violence and oppression, particularly when the power (physical and political) is asymmetrical and concentrated in the hands of one segment of the population.

And while we hear of many cases in which security forces were injured by stones and other objects hurled at them during protests, what is rarely reported by the media is their regular and widespread use of crowd dispersal tactics such as tear gas, stun grenades, rubber bullets, and live ammunition (at levels that would never be deemed acceptable by Israelis, and which actually constitute a violation of the rules of engagement when Israelis are present). According to B’Tselem, between 2005 and January 2013 Israeli security forces killed at least 46 Palestinian stone-throwers in the West Bank by live fire. Even firing tear gas has proven to be injurious to demonstrators, such as in the cases of Eymad Rizka and Americans Emily Henochowitz and Tristan Anderson, and lethal, as in the case of Bassem Abu Rahma and Mustafa Tamimi.

There is a third common type of stone throwing that seems to have passed under the radar of the bill’s sponsors. Stone throwing is also a regular method of Jewish terror against Palestinians, which seeks to threaten, harm and intimidate Palestinians from cultivating their land or demanding their rights, ultimately making way for settlement expansion.

This approach is successful, especially in light of the lack of enforcement of the same laws the Knesset is attempting to harshen when it comes to Jews who commit these very same crimes. The vast majority of complaints by Palestinians regarding violence by Israeli civilians, including stone throwing, are closed without indictments due to the police’s failure to properly investigate these incidents (over 85 percent according to Israeli human rights NGO Yesh Din).

In fact, the phenomenon of stone throwing by Israeli citizens, and the wider phenomenon of violence against Palestinians and their property — as well as the lack of enforcement — goes widely unacknowledged among most Israeli decision makers. There is a lack of will to prevent these attacks in real time, as well as to investigate the suspects and put them on trial. A recent report by Yesh Din documents the ways in which Israeli soldiers and police officers “stand idly by” and refrain from intervening when Israeli civilians throw stones or commit other violent crimes against Palestinians and their property.

What is more, the Israeli military penal code does not contain an appropriate clause vis-à-vis the IDF’s duty to protect the occupied population, as is required by international law (while this requirement has been internalized by the military echelon, it has yet to trickle down to the soldiers in the field). The Military Advocate General Corps (MAG) informed me that as of the beginning of this year, not a single soldier has ever been indicted for standing idly by, even under the existing laws. According to testimony provided by a soldier to the Israeli group Breaking the Silence and quoted in Yesh Din’s recent report:

Still, we do not need harsher penalties for stone throwing. There is no public benefit in jailing either Palestinian or Jewish stone throwers (most of them minors) for long periods of time. Doing so will only lead them down a more criminal path before they reach adulthood. This is not the reason why the criminal justice system exists. The only solution to this problem is equal law enforcement, halting the disproportionate use of force by the army and the police against demonstrators, ending the occupation, and alleviating the oppressive living conditions that cause despair among Palestinians on both sides of the Green Line.