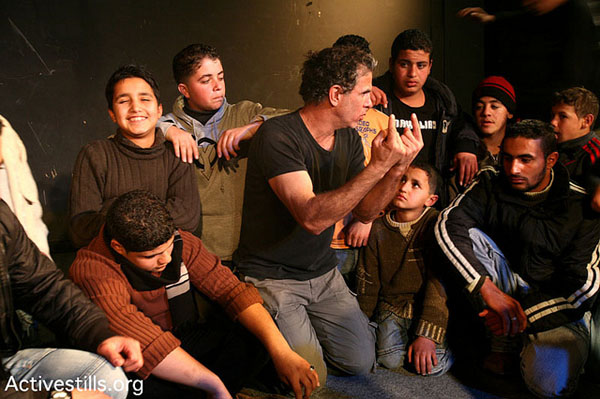 The location manager of The Freedom Theatre, Adnan Naghnaghiye was arrested and taken away to an unknown location together with Bilal Saadi, a member of the board of The Freedom Theatre. When the general manager of the theatre Jacob Gough from UK and the co-founder of the theatre Jonatan Stanczak from Sweden arrived to the scene they were forced to squat next to a family with four small children surrounded by about 50 heavily armed Israeli soldiers.

Jonatan Stanczak, in recounting the attack this morning, told the press that, “Whenever we tried to tell them that they are attacking a cultural venue and arresting members of the theatre we were told to shut up and they threatened to kick us, I tried to contact the civil administration of the army to clarify the matter but the person in charge hung up on me.”

The Israeli army has yet to release a comment confirming what happened this morning in Jenin. Emily Smith, an American photographer working with the Freedom Theater, told +972 that the Israeli civil administration and army have refused attempts by members of the Freedom Theater to get information about the whereabouts of the arrested and reasons for the raid.

UPDATE 11:30am: Ma’an News Agency is reporting that the Israeli military confirmed this morning that two people were arrested in Jenin but deny that the theater was raided by soldiers.

UPDATE 7:00PM: The IDF spokesman is maintaining that the army did not raid or enter the theater this morning despite the accounts by members of the Freedom Theater. The spokesman has not been clear about where exactly the Palestinians were arrested, only saying they there were taken in “near the Jenin theater.” Photos have emerged of the damaged Freedom Theater showing stones which members of the theater claim were used by soldiers to attack the building. 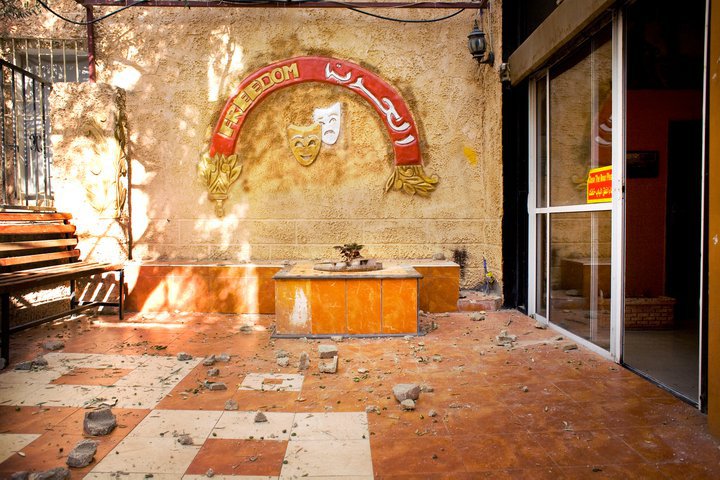 According to Jonatan Stanczak, Israeli soldiers did not physically enter the theater but they attacked it with stones and sealed off the area around the theater while demanding that all inside come out. In the process of the operation, soldiers surrounded all entrances and arrested two people, both were inside the theater when soldiers arrived, Stanczak told +972 from Jenin this evening. “We have researched the definition of a raid, and while troops did not enter inside the theater, we believe what they did should be defined as a raid,” Stanczak noted.