A verdict by the Jerusalem District Court finds that recognizing ‘certain lines of resemblance’ to fascism in the ideology or activities of the right-wing movement can be seen as ‘truthful.’ The verdict is a major blow to Im Tirtzu’s efforts to portray itself as a mainstream, grassroots movement.

The extreme-right group Im Tirtzu lost a court case against a group of leftist activists who opened a Facebook page called “Im Tirtzu – A Fascist Movement.” Judge Raphael Ya’akobi of the Jerusalem District Court determined that some of Im Tirtzu’s attributes bear certain similarities to fascism – thus allowing the activists to use both a freedom of speech defense, as well as “spoken truth” defense.

Ya’akobi ruled against Im Tirtzu in all claims of the lawsuit, except for a post on the group’s page which drew similarities between Im Tirzu and Nazi ideology.

Im Tirtzu has become known over the past several years for their attacks on left-wing academics and organizations. Following the Goldstone Report on 2008-09’s Operation Cast Lead in Gaza, Im Tirtzu accused the New Israel Fund of aiding, through the various organizations it supports, the UN fact finding mission. A personal campaign against the head of the NIF, Naomi Chazan, bore anti-Semitic features [disclaimer: +972 Magazine is on the New Israel Fund’s donor-advised list].

Later, Im Tirtzu members campaigned against academics who taught courses about the Palestinian narrative of 1948, and led the campaign to shut down the political science department in Ben Gurion University, which was considered too “lefty.” Last year, the department was put under a long review process by the Israeli universities’ budgeting committee. Im Tirtzu was also behind the attempt to scare the Eretz Yisrael Museum from hosting the annual ‘Return Conference,’ an event put on by the non-profit Zochrot, which works to promote awareness of the Nakba in Israeli society. 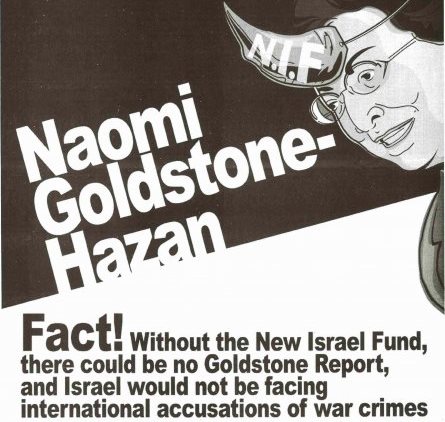 Three-and-a-half years ago, Im Tirtzu filed lawsuit against the creators of the Facebook page “Im Tirtzu – a Fascist Movement,” demanding NIS 2.6 million ($720,000 US) in compensation and the removal of the page. During the procedures, the defendants had Professor Zeev Sternhell, a world expert on fascism, testify on the resemblance between Im Tirtzu’s activities and those of the European extreme right in the first half of the twentieth century. Sternhell himself was a victim of a pipe-bomb attack by Jewish terrorist Ya’akov “Jack” Teitel.

Furthermore, Ya’akobi ruled that in all cases but one, the name of the Facebook page and the specific posts that were brought before him fall under the right to free opinion. Thus, a slanderous motive cannot be attributed to them.

Here is a link to the full verdict [Hebrew].

Although the court could have stopped there, Ya’akobi also accepted the defense of “a truthful publication,” that the critique of Im Tirtzu as part of the political debate was in the public’s interest. In other words, the court is not stating the Im Tirtzu is a fascist movement (or that it isn’t, for that matter), but that because there exist “certain lines of resemblance” to fascism, calling them as such cannot be considered slanderous.

This is a major blow to Im Tirtzu’s attempts to position themselves as a mainstream grassroots movement. In the past, group members threatened a lawsuit against Wikipedia Israel for calling it “a right-wing movement” on its entry.

Im Tirtzu has been sponsored by John Hagee’s Christians United for Israel. According to the movement’s report, in recent years most of the support to Im Tirtzu comes from the Central Fund of Israel, which sponsors various religious, right-wing and settler causes.

The Jerusalem court did not call for compensation regarding the single claim in which it ruled in favor of Im Tirtzu, since the case is likely to end up in the Supreme Court.