How does one go about fostering neighborly relations in Jerusalem? It’s very simple, according to the city’s mayor: curfews, closures, concrete blocks and lots of police. 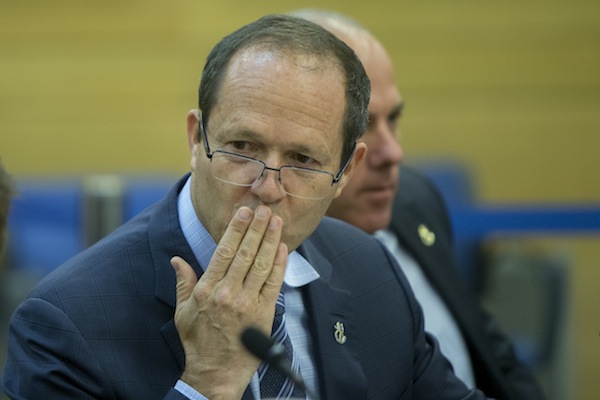 Jerusalem Mayor Nir Barkat regularly holds forth about how his city’s various demographics can rub along in peace and quiet. Back in July, in deference to the city’s ultra-Orthodox population, he announced he wouldn’t attend Jerusalem’s Pride parade. Barkat’s decision, taken so as not to “harm” Jerusalem’s Haredi community, came one year after an ultra-Orthodox man was so outraged at the presence of LGBTQs in the city that he stabbed six people at the same event, murdering one of them.

In August, Barkat told a group of Likud activists that a stop for Jerusalem’s planned cable car will be placed in the Palestinian town of Silwan so as to show “who really owns this city.” As a reminder, Silwan is already at boiling point due to the encroachment of settlers and settler organizations both over– and underground.

And last week, again speaking with Likud activists, Barkat waxed rhapsodical about his “philosophy of coexistence” for Jerusalem, a term he used after explaining how he has collaborated with the security forces to impose collective punishment on the city’s Palestinians.

“We’ve developed some very, very interesting models. The first is cooperation between the Shin Bet, police, law enforcement and the municipality… I’ve requested closures and curfews in Jerusalem… We’ve put nearly 30 closures (in place). If you walk around the entrance and exit of the (Palestinian) villages today, you’ll see concrete blocks… This philosophy creates a very high level of coexistence between Jews and Arabs in the city.”

There you have it: not only are repressive military tactics now a philosophy; they are also, according to Nir “Sun Tzu” Barkat, a means by which to foster harmonious relations between Jews and Palestinians. Of course, the “co” is somewhat undermined by the fact that the two groups in this equation exist at opposite ends of the barrel of a gun. But Barkat’s philosophy springs from the same logic as keeping Israel’s eternal, undivided capital in one piece by liberally sowing concrete blocks and barriers along its streets. So the mayor of Jerusalem is, at least, consistent.