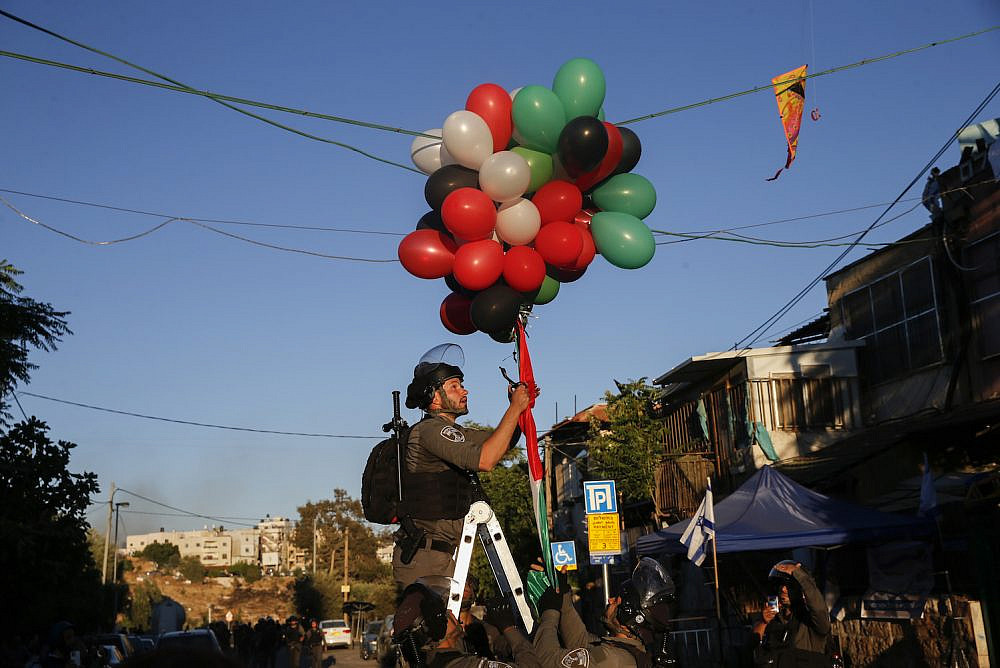 An Israeli police officer tries to take down balloons released by Palestinians in the East Jerusalem neighborhood of Sheikh Jarrah on May 15, 2021. (Jamal Awad/Flash90)

Zack Sabella, a Palestinian resident of East Jerusalem’s Beit Hanina neighborhood, said he is avoiding leaving his house as much as possible. “I don’t feel safe,” he explained. “I sense that settlers are out there looking to spill blood and I feel the police is lenient with them, and in most instances passive in disrupting them.”

Thousands of Palestinian families living in Israel and East Jerusalem share Sabella’s fear. For the past week, they have become targets for groups of armed Jewish settlers and right-wingers who are marching in areas where Palestinians live, chanting “death to Arabs.” In some cases, police officers can been seen standing idly by, increasing existing feelings of insecurity and lack of protection among stateless residents of Israel.

On May 16 in Jerusalem’s Shu’fat neighborhood, a group of armed settlers were stopping cars and reportedly fired at two Palestinian youth who confronted them, said Sabella. The Israeli police’s response was slow, he added, and officers arrived only after the incident had escalated and shots were fired, hospitalizing the two Palestinians. Earlier that day, Israeli police killed a Palestinian man who rammed his car into six police officers at the entrance to the East Jerusalem neighborhood of Sheikh Jarrah, severely wounding one officer.

This anger has been building for years between Palestinians and Israelis living under apartheid. In Jerusalem, it exploded on May 10, when Israel’s Supreme Court was set to issue a verdict on the imminent expulsion of several Palestinian families from their homes in Sheikh Jarrah, in order to move Jewish settlers into the area (the decision was ultimately postponed).

That same day, Israeli police stormed into Al-Aqsa Mosque and fired rubber-coated bullets, tear gas, and stun grenades at worshippers, wounding hundreds of Palestinians. A notorious settler-led “Flag March” to commemorate Jerusalem Day — Israel’s conquest of the eastern part of the city in 1967 — was also set to pass through Damascus Gate of the Old City, before authorities rerouted its path at the last moment.

Sabella, a father of three, is worried by the Israeli police’s leniency in dealing with the settlers. The police are often passive bystanders, even when settlers wave their machine guns in the middle of the street and threaten passersby, he said. Most of the time, he is focused on shielding his three daughters from the violence.

“Whenever I drive with my family in the car, I make sure that I’m alert to my surroundings, in order to navigate any dangers or settler attacks as fast as possible, should I be targeted,” he said. He also doesn’t watch the news or videos circulating on social media in front of his daughters, because of how graphic or violent some of them have been.

Israel has been illegally moving Israeli settlers into Palestinian territories for decades, said Bashar Murad, a Palestinian pop singer and resident of Beit Hanina. “However, this time, two siblings from Sheikh Jarrah, Muna and Mohammed el-Kurd, started the ‘#SaveSheikhJarrah’ hashtag [on social media], which went viral.” 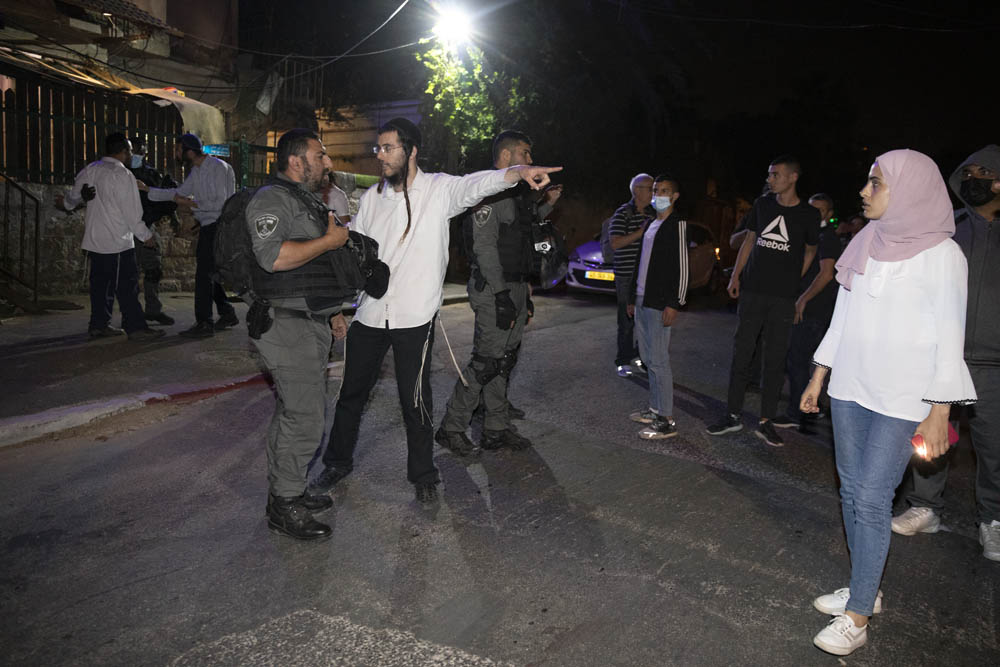 The el-Kurd siblings, who became prominent social media personas for documenting Israeli violations against Palestinians in their neighborhood and articulating their struggle on their feeds, launched the “SaveSheikhJarrah” hashtag with the hope of raising awareness and creating solidarity, in an attempt to stop Israel’s continuous processes of ethnic cleansing against Palestinians, explained Murad.

“After I saw the hashtag and saw the videos posted by Muna and her brother, I couldn’t help but get involved and go down and join the peaceful protests that were taking place in the neighborhood,” he added.

Murad praised seeing the participation of mostly Palestinian youth — Christians, Muslims, and atheists — and some Israelis, all coming together to prevent these forced expulsions. At the same time, however, he was shocked at the huge presence of Israeli forces at the protests, which was disproportionate to the number of peaceful and unarmed civilians, he said.

“The police and Israeli forces are always present in this neighborhood now,” he noted. Following the car ramming this week, Israeli police blocked off the entrances to Sheikh Jarrah with huge cement blocks, which are a usual sight outside Palestinian villages in the occupied West Bank.

Mohammad Hadieh, the Palestinian executive director of the ACT institution for Alternative Dispute Resolution, a nonprofit that provides legal and community services to Palestinians in East Jerusalem, blames Israeli police for increasing tensions by using violence against peaceful Palestinian protestors and solidarity activists in Sheikh Jarrah. 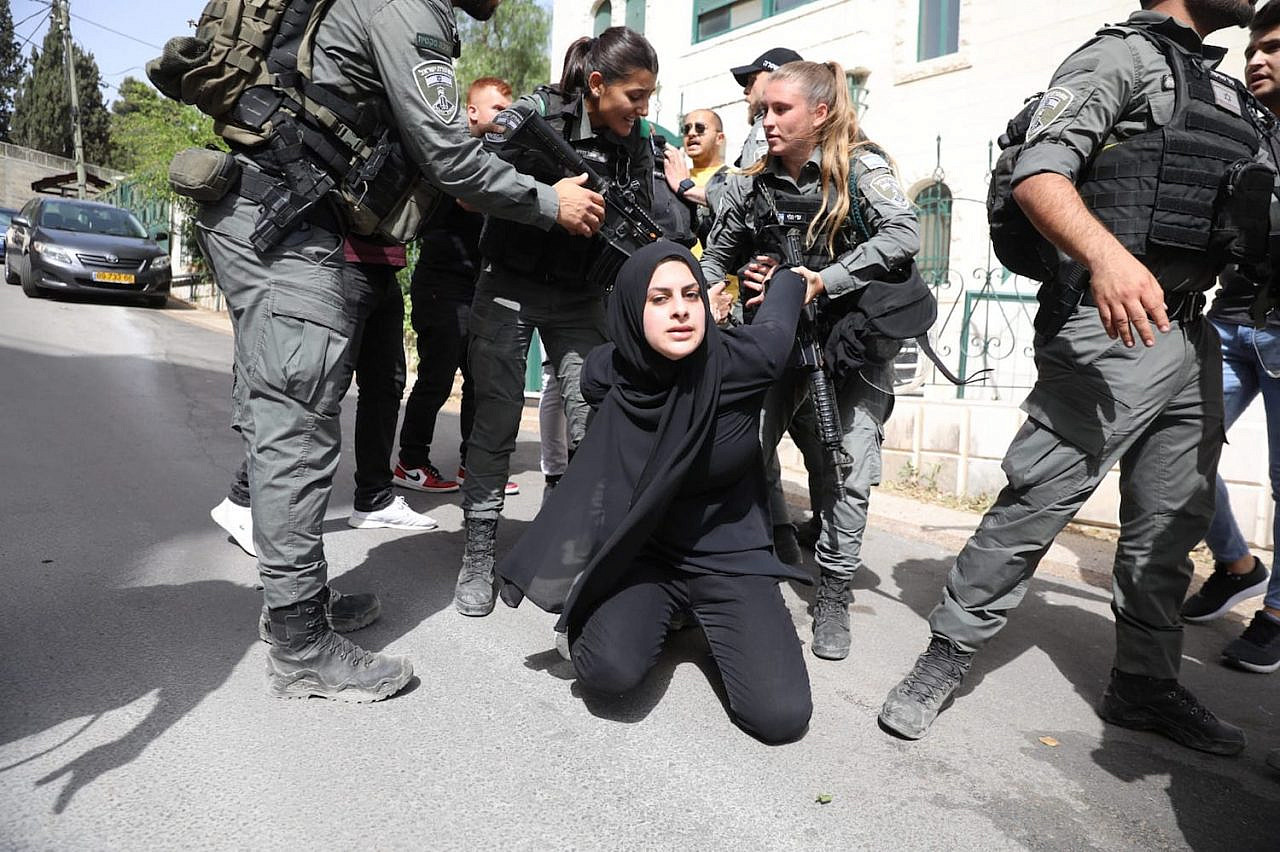 “The police stance was a racist one, supporting and protecting the settlers regardless of their aggression, whilst [at the same time] dealing with the Palestinians with severe violence,” he said.

Hadieh cites the latest violence in Jerusalem and Arab-majority neighborhoods as evidence that Israeli security forces treat settlers differently than Palestinians. Videos from the recent weeks in Sheikh Jarrah show police forces allowing settlers to move in and out of the neighborhood freely, while at the same time intimidating and beating unarmed Palestinian residents and protesters standing in solidarity with the families.

“These are dangerous measures that indicate an absolutely unsafe future and a lack of confidence in the role played by the Israeli police, which clearly serves a single policy: the policy of strengthening settlements in East Jerusalem,” said Hadieh.

As a resident of East Jerusalem and a father, Hadieh said he doesn’t feel that he or his family are safe. “Today, our schools are closed because the streets are unsafe while settlers are cruising our streets, armed like crazy people, looking to attack us and our kids.”

Despite having been born in the holy city, most Palestinians in East Jerusalem are residents but not citizens of Israel. This means they can exercise only a limited set of rights, and that Israel can have their residency rights revoked.

Murad, the singer, heavily criticized the two parallel systems of justice that exist in Israel, saying the police are always standing by the settlers and giving them cover, even when the settlers are the ones starting a fight or provoking the protesters. “The soldiers are always protecting them. But as soon as a Palestinian chants, or a Palestinian flag goes up, the Israeli military starts to attack the Palestinians.”

Murad witnessed young men and women being attacked in front of him, with Israeli officers even ripping the women’s headscarves off. 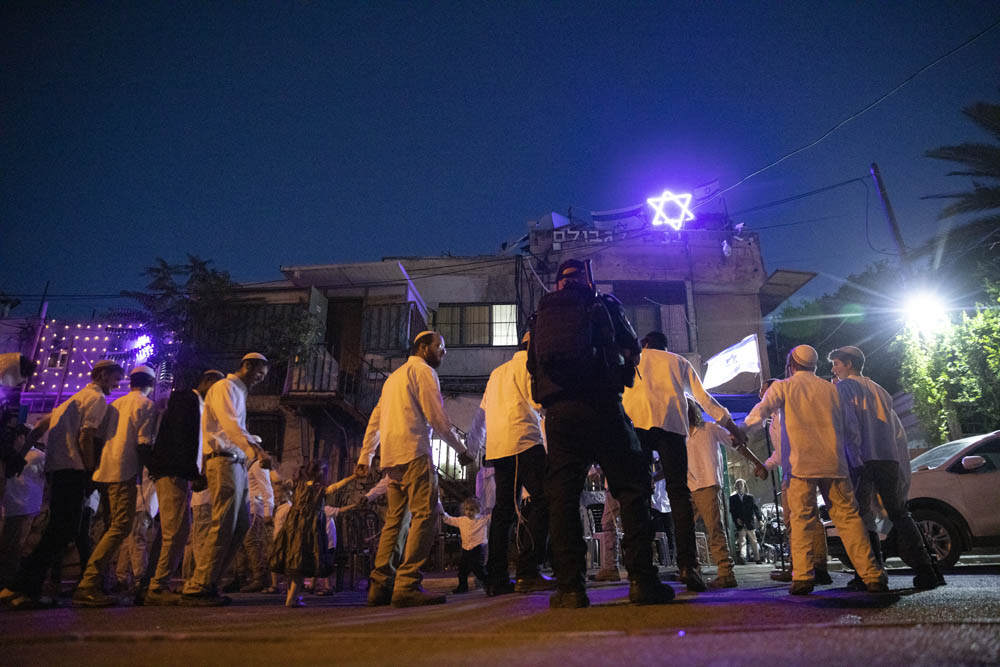 “Now we are seeing videos of huge mobs of ultra-nationalist Israelis screaming in Hebrew ‘death to Arabs,'” he said. “They are being unleashed onto the streets, and of course the police are always not present when this is happening, although they are all over the city.”

Murad doesn’t only fear for his own life, but for that of his family, friends, and community. He says he feels the threat is coming from all directions, with the presence of Israeli forces in Palestinian neighborhoods, or the lynch mobs screaming for murder, or the armed settlers who are randomly shooting at Palestinian civilians.

“It feels like we are living in a video game just waiting one by one to be exterminated. I don’t feel safe in a country that favors and values the lives of one ethnicity or one religion over the other,” he concluded.

Jalal Abukhater, a Palestinian writer and activist, told +972 that the series of events escalating in Jerusalem, the West Bank, Gaza, and elsewhere are partly a result of Palestinians reclaiming their spaces, their voices, and their right to exist in the holy city.

“We are reclaiming a certain sovereignty over our areas and neighborhoods of Jerusalem, which angered a lot of Israeli extremists when the Jerusalem Day march was rerouted,” Abukhater said, referring to the yearly parade by Jewish ultra-nationalists through Jerusalem’s Old City, in which they often wave Israeli flags, chant racist slogans, and sometimes attack Palestinian bystanders to mark the day of Israel’s occupation of East Jerusalem in 1967. As tensions mounted in the lead-up to the march, Israeli authorities decided to block the Israeli Jews from marching through the Old City.

“They were unhappy they didn’t subjugate Palestinians enough, and that we stopped this very provocative, racist, extremist parade from coming to our neighborhoods for the first time in the history of the occupation of Jerusalem,” said Abukhater.