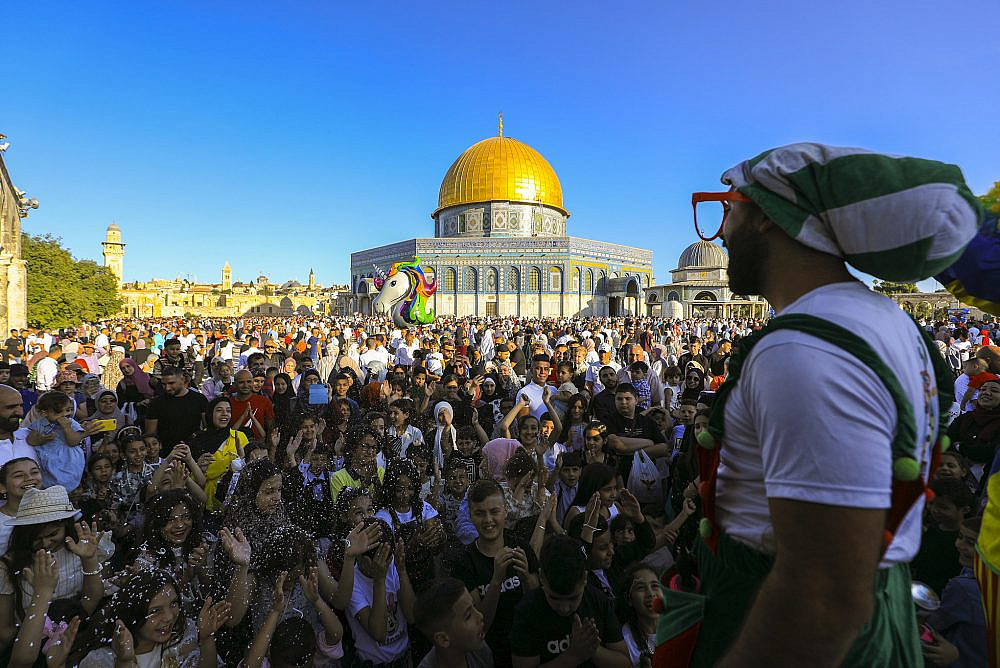 Five years ago, when I was 22 years old, I finally had the opportunity to visit Jerusalem for the first time. I was part of a program for a group of Palestinians and internationals committed to standing together against injustice and occupation. Although the program participants mainly stayed in the South Hebron Hills, where I am from, we were scheduled to go to Jerusalem for one day as well.

For my friends, this trip was not such a big deal — most of the Palestinians had been to Jerusalem before, and most internationals can easily go to Jerusalem when they like. But for me, this opportunity was a dream come true. Even though I have lived my entire life only about an hour’s drive from Jerusalem, the injustices of the occupation mean that I, like all Palestinians in the occupied West Bank, need a permit to enter Jerusalem and any other area inside the Green Line.

Denying Palestinian entry permits, whether for tourism, work, or visiting relatives, is one way that the occupation makes Palestinians suffer. There are many conditions that one must fulfill to get a permit, including that you must be married and not be marked with a security flag. But even with these requirements, denials can be totally arbitrary. And applying for a permit can cost Palestinians huge sums of money every month – it is not uncommon to pay over 2,000 NIS per month on average trying to get a permit in order to access essential employment or visit family. This whole process has a devastating psychological effect, and repeated denials for permits instill a feeling of pain, knowing that we Palestinians cannot visit the rest of Palestine and important Palestinian cities, most of all Jerusalem, without going through a demoralizing process that often ends unsuccessfully. 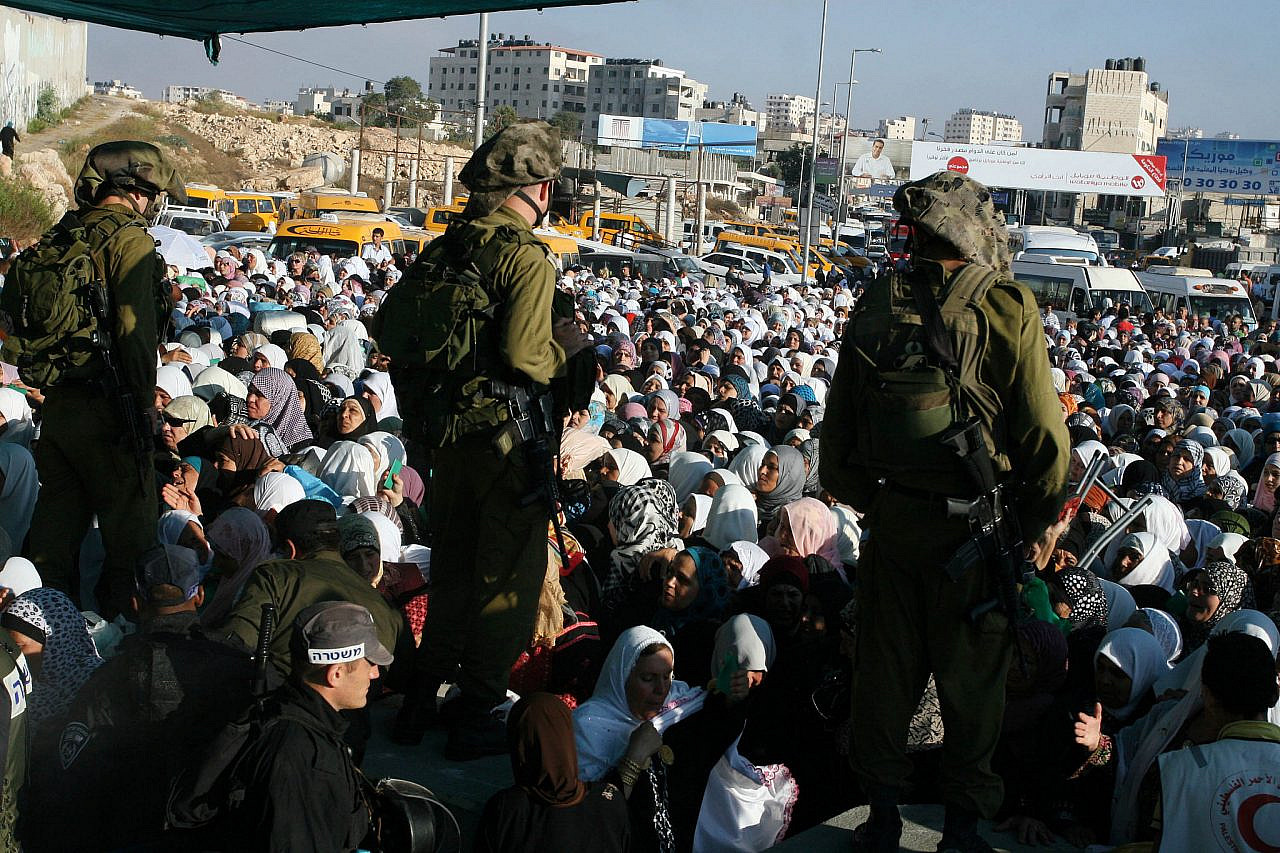 Israeli soldiers checking IDs of Palestinian women as the wait in line to pass the Qalandia checkpoint from Ramallah to Jerusalem, Aug. 19, 2011. (Issam Rimawi/Flash90)

That night five years ago, while our group was staying in Bethlehem, our guide told us after supper that we must wake up early the next morning for our trip to Jerusalem. Little did he know that I would not not be sleeping that night. We went to our bedrooms, and although I tried to sleep, I could not. I spent that night smiling to myself as I thought of Jerusalem. I began to cry when I realized how simple my dream was, but I didn’t even notice my own tears at first.

I thought of my mother, and I hesitated, thinking about whether I should call her and tell her that I would be visiting Jerusalem the next day. I decided I wouldn’t call her — I was afraid the Israeli army would not allow me to pass through the checkpoint, and I did not want her to feel sadness and disappointment if that were to happen. I looked at my phone constantly, watching the hours, minutes, and seconds go by. I hated time itself that night, and I felt it was fighting me, telling me the night would ever end.

Eventually it was 4 a.m., and I was still wearing my clothes, praying to God again and again that everything would be fine and that I would arrive in Jerusalem. After the dawn prayers, I finally slept, maybe from thinking too much, or from fatigue, but soon something woke me. I heard a voice at the door; it was my friend and brother Eid. He was knocking on the door and calling to me that we had to go so as not to be late.

When I left my room and saw my friends eating breakfast, I felt there was hope that I would finally achieve my dream of visiting Jerusalem. Minutes later, we were on the bus. I did not want to lose a single moment of being able to see the city, so I sat beside the window. The intensity of my fear and tension caused me to tremble. I felt afraid of everything. Yes, I had a permit to enter Jerusalem, but I still felt afraid, because I had applied for a permit to visit many times before but had not received it. I was afraid that the soldiers would check my ID and stop me from achieving my dream.

A few minutes passed, and they told us that we were approaching the checkpoint. I prayed to my God so intensely in my heart. I do not know if my friends noticed my troubled spirit or not; I do not remember how any of them were at that moment.

When we arrived at the checkpoint, the occupation soldiers ordered our bus to stop. One of the soldiers approached the bus driver and began to talk to him. I was sitting in the middle of the bus as fear overtook me. I did not hear the conversation that took place between the soldiers and the bus driver — I was too busy going through the most difficult two minutes of my life.

Once they let us in and we rode through the checkpoint, I was unbelievably happy. I was crying tears of joy. In that moment, I decided to enjoy this wonderful day and forget the fear of mortality that Jerusalem instilled in me — because who knows if I would ever get the chance to go back or not. I looked at everything through the bus window, as if I were seeing the world for the first time. Everything in Jerusalem was simply beautiful. 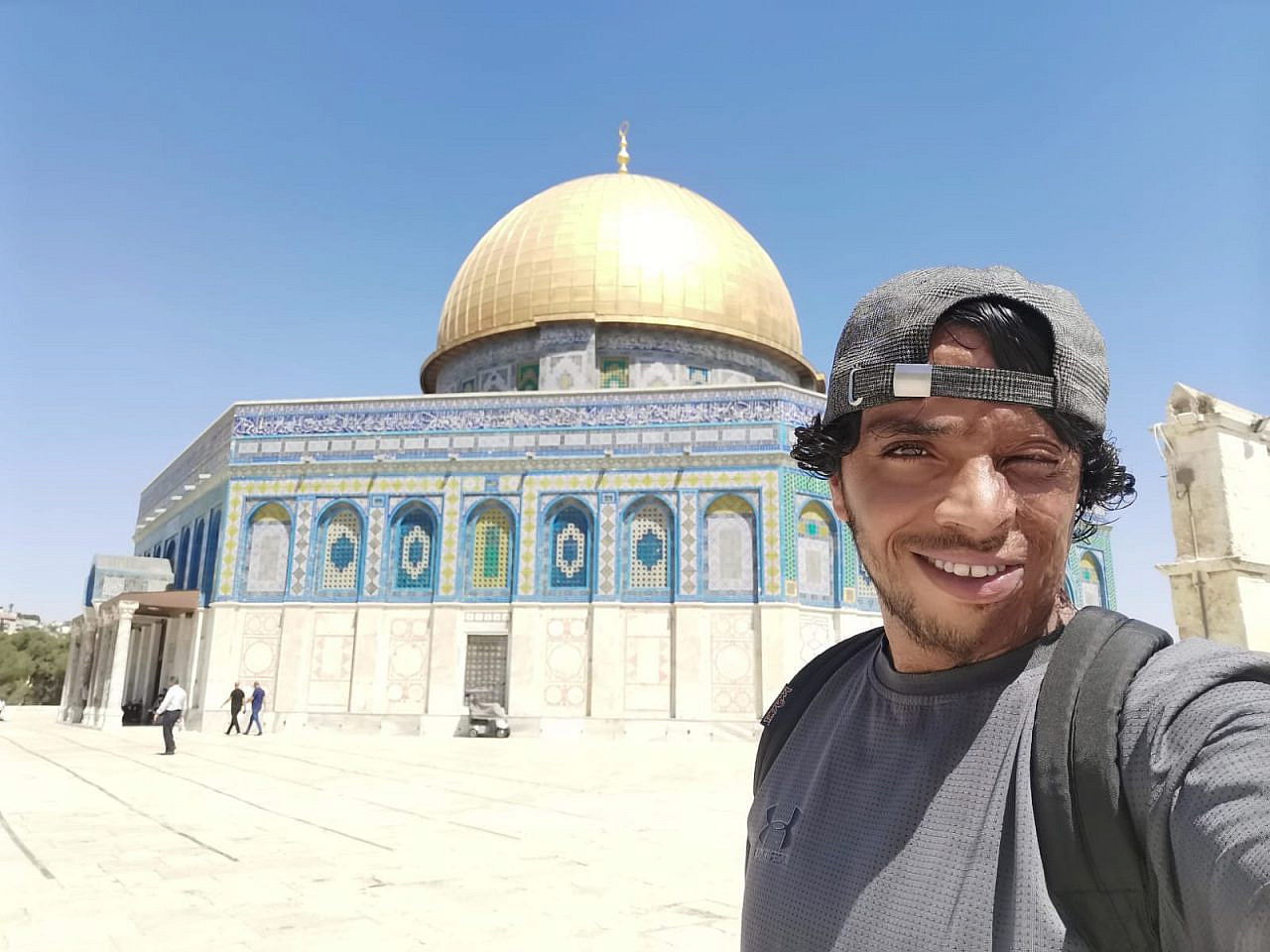 The author in front of the Dome of the Rock. (Awdah Hathaleen)

Once we got off the bus, I felt that I could smell the city’s history. I felt the past, the present, and the future. I drank coffee with Tariq, a friend and cousin who is like a brother to me, who was also visiting Jerusalem for the first time. Simply being together with him in Jerusalem made even the coffee taste different. I asked one of the group leaders if I could visit Al-Aqsa Mosque. I went quickly, entering the gate and walking toward it. It pained me to see Israeli soldiers at the entrance of our holy site of Al-Aqsa, especially given that they often bother or harass worshipers trying to enter.

But as I stood in the mosque, I realized that my dream had come true. I was inside Al-Aqsa Mosque, and my God, it was so beautiful and inspiring. I prayed to God. I prayed for so much — that the situation here would change, that it would become better. And I promised Jerusalem that I would visit again.