Jerusalem’s real problem is the nationalist and religious fervor in both Israeli and Palestinian societies that foment the greed, competitiveness, obsession, insecurity, and desire for control of the city and its narrative. An alleyway in the Old City of Jerusalem, September 26, 2014. (Photo by Faiz Abu Rmeleh/Activestills.org)

When I was a kid, a family trip from Tira to Jerusalem was considered a special occasion. About twice a year we would drive straight to the Old City, eat shawarma and kunafeh at the same restaurant and sweet shop, and best of all, visit the Dome of the Rock (“al-Sakhra”) and al-Aqsa mosque.

Even though I wasn’t very religious, it was hard not to be enamored by the Old City and its religious sites, and to know that the Western Wall and the Holy Sepulchre, holy to Jews and Christians respectively, were only short walks away.

Sadly, that childhood sense of wonder evaporated as I became more aware of what was really happening to the city around us: the poverty of Palestinian neighborhoods; the Israeli flags waving on the roofs of stone houses; and the armed soldiers and policemen roaming the streets.

Soon I heard the stories of Palestinian families being thrown out of their homes; of children being arrested during raids in the middle of the night; of settlements designated for Jewish citizens only; and of an obsolete and invisible border called “the Green Line.”

But the occupation was not the only thing that corroded Jerusalem’s magic. When my family and I approached the mosques, the waqf representatives were as invasive as the Israeli soldiers demanding our IDs outside the Haram al-Sharif/Temple Mount compound. “Where are you from? Are you Muslim? What is the first verse of prayer?”

The worst was when they scrutinized my mother, sometimes nitpicking over a few strands of hair sticking out from under her headscarf, or insisting that she be separated from me and my father during prayer, even when the mosques were almost empty. Palestinian Muslim worshippers pray overnight, July 13, 2015 outside the Dome of the Rock in the Aqsa mosque compound in Jerusalem’s Old City during Laylat al-Qadr which falls on the 27th day of the fasting month of Ramadan, July 13, 2015. (photo: Faiz Abu Rmeleh/Activestills.org)

This past week, my fellow writers on +972 have correctly highlighted that the recent escalations in Jerusalem – of Palestinians throwing stones, the Israeli authorities encouraging live fire against them, and the clashes on the Haram al-Sharif – are neither new nor unexpected. They are inevitable outcomes of Israel’s occupation and the resistance and discontent that naturally generates against it.

To this day, many observers are not comprehending the extent to which the occupation has mutated the city to produce what the writer Teju Cole accurately described as “cold violence…a suffocating viciousness” to erode Palestinian presence in the city. Jerusalem has become a sick city as a result of this cold violence, and is getting sicker with every passing year.

But the source of this sickness is deeper than the occupation alone. The real problem – of which even the occupation is a symptom – is the nationalist and religious fervors emanating from many among both Israelis and Palestinians, which foment the greed, competitiveness, obsession, insecurity, and desire for control (if not domination) of the city’s space and its narrative.

We see this from the rhetoric of political leaders, to the symbols and slogans displayed in the public sphere, to the physical and at times deadly violence waged on the ground. It exists in the massive Jewish settlements and infrastructures cutting across occupied lands and neighborhoods, and it exists in the photos of killed Palestinian militants cropped in front of the Sakhra and Aqsa. 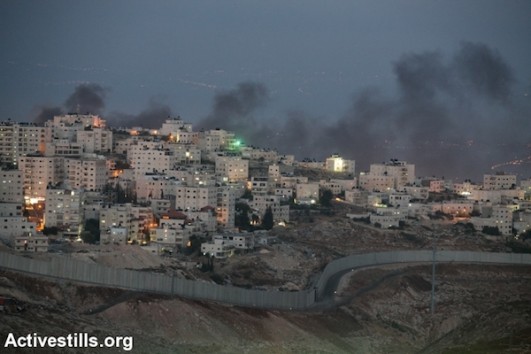 There is no doubt that Jerusalem is central to the identities of both Israelis and Palestinians, and there is nothing wrong with wanting to protect strong national and religious connections to the city – on the contrary, they are what make Jerusalem the extraordinary place that it is. But both Israelis and Palestinians have allowed political ideologies to corrupt the city’s transcendental character.

Far from genuinely embracing the city’s ancient, holy and multicultural identity, Jerusalem is instead viewed as the aspired crown jewel of each side’s selfish agendas. “Jerusalem will be the undivided capital of the Jewish people” says Benjamin Netanyahu, or “Jerusalem will be liberated for the Arabs/for Islam” says Khaled Mesh’al. Even the notion of dividing Jerusalem to become separate capitals of two separate states illustrates how Jerusalem is seen as something to be owned, not to be shared.

These nationalist-religious passions have increased in their radicalism. The Israeli occupation has been the largest catalyst for this as it aggressively alters the landscape of Jerusalem and the wider Israeli-Palestinian region, while normalizing the state’s colonial control in Israeli political consciousness. But just as damaging are certain movements among Palestinian society that have chosen to confront the Jewish national-religious fanaticism with their own Arab or Islamic fanaticism. Many Palestinians have marginalized this subject for fear that it would play into the hands of Israeli advocates seeking to distract attention from the occupation. 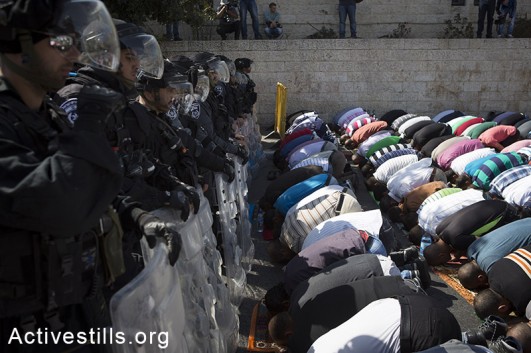 But even though it is the highest priority, the occupation is not a justification for these groups to exhibit oppressive or intolerant views towards divergent religious thoughts, women’s rights in their own community, and the rights of different communities, among others. Nor does occupation justify being silent about these issues, especially when they are compounding the violations of the few rights that Palestinians have today.

This is why the only permanent cure to Jerusalem’s sickness lies not just in ending the occupation (the foremost and most urgent step), but in ending the nationalist-religious mantras of ownership of the city in both Israeli and Palestinian social and political thought.

Peace on the Haram al-Sharif/Temple Mount cannot happen without peace over Jerusalem as a city – in its identity, its governance, its urban planning, and its respect for the rights of all its residents and all those connected it. Regardless of the final political outcome of the wider conflict – one-state, two-state – Jerusalem must be protected for one people only: everyone.