One year after Operation Protective Edge, a group of 30 women are fasting for the next month to pressure Prime Minister Netanyahu to return to negotiations. 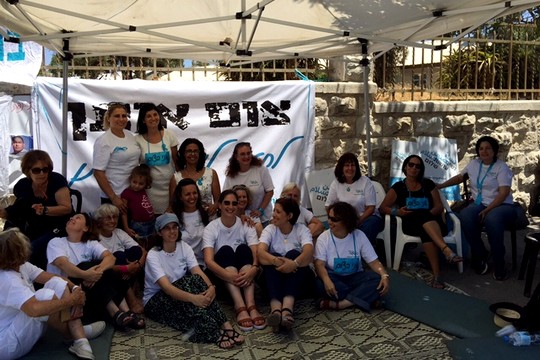 ‘Women Wage Peace’ sit in their protest tent on the first day of their fast, July 9, 2015. (photo: Michael Salisbury-Corech)

At the entrance to the prime minister’s residence in Jerusalem, nearly 30 women are sitting on mattresses, surrounded by banners calling for peace negotiations. One of their shirts reads “Women waging peace and stopping the next war.” Some of them hold signs that read: “Fasting!” Despite the uniform dress, the women come from different backgrounds: some are Arab, some religious, some Mizrahi, others Ashkenazi.

On Thursday, a year after Operation Protective Edge, the “Women Wage Peace” group has built a protest camp outside the prime minister’s residence, calling on the government to return to negotiations with the Palestinians. The movement was established during last year’s war by Israeli and Palestinian women from across the country who are hoping to prevent the next casualties of war. As part of their protest, the women will go on single-day fasts for the duration of 50 days, the length of last year’s war. The decision to fast stems from their desire to show solidarity with the pain and struggle of war, and because fasting requires making sacrifices and steadfastness, much like peace negotiations.

Yael Trader, one of the activists at the protest camp, explained to +972’s Hebrew sister site, Local Call, the reasoning behind the fast: “We wanted to do something significant, because since the last war there has been no process toward an agreement. The last war broke me because of the force that was used, as well as how strong the Israeli consensus was. It frightened me because the common conception here is that only force will solve our problems, and it was clear to me that this doesn’t work. I was close to asking myself whether I can continue to live here. The only remedy for my desperation was to get upend do something.”

Maysam Jaljuli, who heads the Na’amat (the leading women’s movement in Israel.) in the Lower Triangle region on behalf of Hadash, described the effects of last summer’s war:

I was very despondent and felt like there is no chance for peace. I am an activist for equal rights, and during the war I felt like everything we built was destroyed. Every instance of racism, every time an Arab was harassed at the workplace, and of course the attacks and the massacre in Gaza broke me. Sometimes I cannot believe that life continued. And truly at the end of it all, I had to continue and struggle. To believe in hope, especially for our children.

When Women for Peace first organized, it gave me hope, and I immediately agreed to take part. After the war and the elections I felt like I had no one talk talk to, and that the Israeli Jews were being incited against us by blindly following their leaders. In the movement I understood that this wasn’t true, and that there are groups of people who changed for the better and decided to work for peace. Also, the fact that Jewish women are willing to fast in order to put pressure on our leaders compelled me to come and support them as an Arab woman.

Trader also emphasized the fact that the organization is made up of and led by women: “I think that the leaders here are mostly former generals who have a hard time reaching a solution, since they have a militaristic outlook. I think that these women have something new to offer. There are many examples of women’s movements around the world that have brought peace or have toppled dictatorships. As a daughter of a bereaved family, I understand the huge effect that mourning has on us and on the Palestinians.”

The women hope that the general public will come and join their discussion circles over the next month-and-a-half. They are calling on women to come and be part of the activities in the camp, and even fast with them.

Michael Salisbury-Coresh is an anti-occupation and public housing activist based in Jerusalem. This article was first published in Hebrew on Local Call, where he is a blogger. Read it here.