Details of the police investigation into the kidnapping and murder of Muhammad Abu Khdeir have been held under gag order. 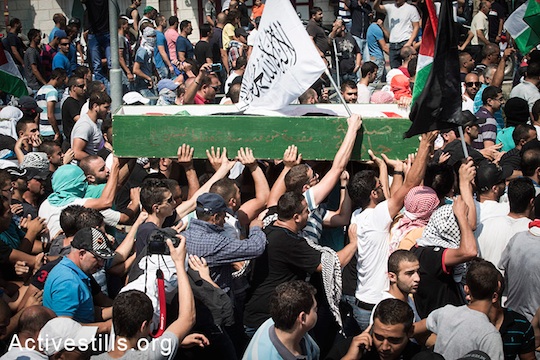 Palestinians carry the body of Muhammed Abu Khdeir through the streets of Shuafat. (photo: Oren Ziv/Activestills.org)

Six suspects identified as “Jewish extremists” were arrested in connection to the heinous murder of Muhammad Abu Khdeir, police revealed as details began emerging about the investigation Sunday morning. All details about the investigation have been kept under gag order since the 16 year old was kidnapped and burned alive, an incident that sparked clashes and riots in Shuafat that spread to other parts of Israel in recent days.

It is important to point out that following the kidnapping/murder of the three Israeli teenagers on June 12, headlines in Israeli media and statements from the government quickly deemed it a “terror” attack perpetrated by  “terrorists” backed by the “terrorist” organization Hamas – before any evidence was shown or any suspects arrested.  However, in the case of Abu Khdeir’s murder, the suspects are, at worst, “Jewish extremists” or from the “far-right.”

While the Abu Khdeir family claimed from the very beginning  that this was an act committed by Jewish Israelis because their son was Palestinian, rumors spread (many believe by the Israel Police itself) that this was an inter-family honor killing, possibly because the victim was gay. However, that baseless claim was completely ruled out Sunday.
Read +972’s full coverage of the kidnappings and their aftermath

According to a preliminary autopsy report released Friday, Abu Khdeir was burnt alive; soot was found in his respiratory system and he had burns over 90 percent of his body, in addition to a head injury.

Police were expected to hold a press conference Sunday afternoon.

Meanwhile, a Jerusalem court on Sunday ordered the release of Muhammad Abu Khdeir’s cousin Tarek, an American citizen from Tampa, Florida who was  brutally beaten by Border Police officers while  in custody on Thursday. Tarek has not been charged with a crime. His bail was set at NIS 3,000 and he was placed under house arrest and barred from entering Shuafat, where he has been on vacation visiting his family. The investigation against him is ongoing. There were various reports in Israeli media as to police claims ranging from: that he was involved in rioting, was carrying a slingshot, was carrying a knife, attacked policemen and the latest was that he hurled rocks and /or Molotov cocktails at police.

Tarek spoke to the media after being released from custody Sunday afternoon. He says he was watching and not participating in the clashes when he was beaten and then lost consciousness. (Video from Addameer)

Related:
Police are exacerbating the violence with gag orders
Kidnappings leave a wake of ‘revenge,’ racist violence
A premier failure: Where is Israel’s leadership?