Jerusalem’s Dormition Abbey has been vandalized for the second time in two years, with violent and threatening graffiti scrawled across its exterior. The incident is the latest in a series of attacks on Christians in Israel. 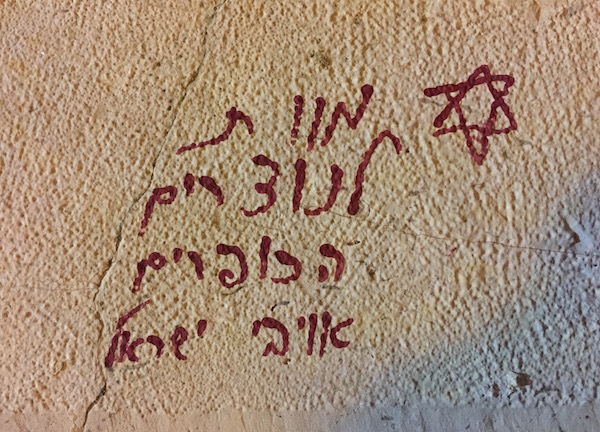 Graffiti reading “Death to heretical Christians, the enemies of Israel” on the walls of the Dormition Abbey, Jerusalem, January 17, 2016. (Photo: Dormition Abbey)

The Dormition Abbey near the Old City of Jerusalem was vandalized overnight on Sunday, with numerous threatening and violent messages and images scrawled on its walls and in nearby Christian cemeteries.

According to a press release from the abbey, the graffiti was found shortly after midnight Sunday morning and followed “loud chanting and music by Jewish right-wing radicals,” an almost-weekly occurrence in the neighborhood where the abbey is situated. The statement added that the abbey’s inhabitants had been promised security cameras by the police following a previous incident of vandalism at the site in 2013, but that so far none have been installed.

The graffiti featured messages such as “Death to heretical Christians, the enemies of Israel,” “The children of Israel’s revenge is coming” and “May his name and memory be obliterated,” in reference to Jesus (whose name in Hebrew appeared as an acronym). One spot featured a hand holding a sword, apparently dripping in blood, next to a Star of David. 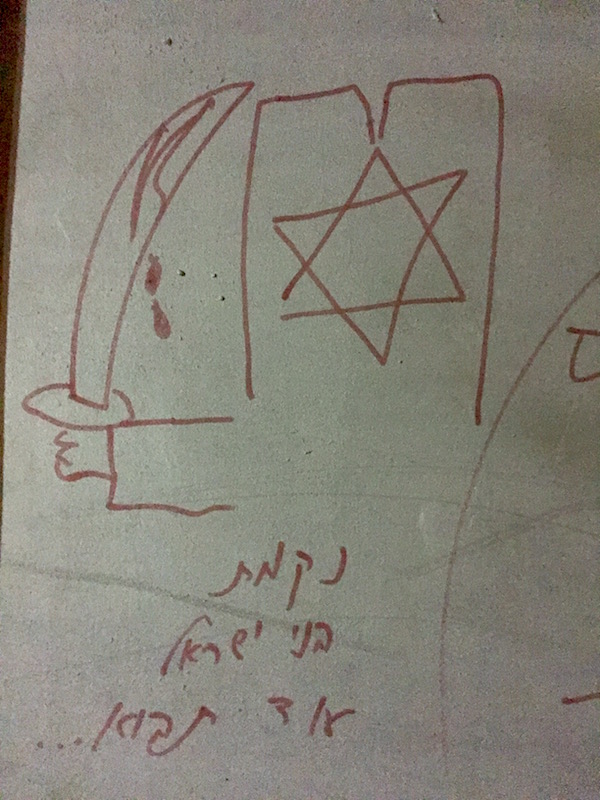 Graffiti reading “the children of Israel’s revenge is coming” on the walls of the Dormition Abbey, Jerusalem, January 17, 2016. (Photo: Dormition Abbey)

The Dormition Abbey — where the Virgin Mary is believed to have died — and its surroundings have been the subject of attacks in the past, most recently when a Greek Orthodox seminary next to the abbey was set alight in February 2015. The crime remained unsolved until the Shin Bet launched a wide-ranging and controversial investigation into Jewish terrorism following last year’s Duma murders. Three indictments for the arson resulted, against Yinon Reuveni — who has also been indicted for the arson at the Church of Loaves and Fish in northern Israel — and two minors, one of whom is also the secondary suspect indicted for the Duma arson. 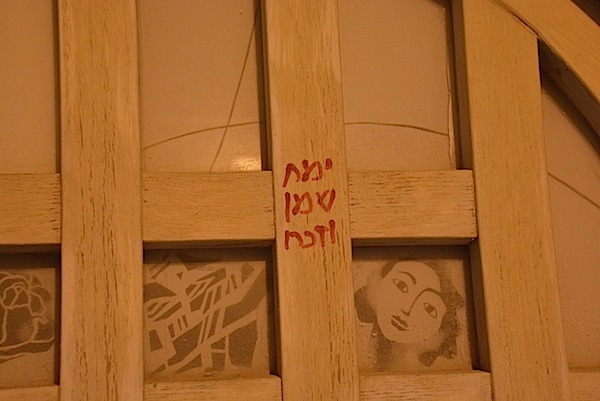 Anti-Christian sentiment has been on the rise in Israel in recent years, prompted by increasing attacks from far-right Jewish extremists. Aside from attacks on the Dormition Abbey (which was also targeted in 2012, 2013 and 2014) and the Church of Loaves and Fish, so-called “price tag” attacks have hit a West Jerusalem Baptist church and a Roman church, both of them in Jerusalem, among others. Messages left behind included statements such “Jesus is garbage” and “Mary was a prostitute.”

Last year, the head of the far right-wing Lehava group, Benzi Gopstein, was filmed saying that the burning of Christian churches in Israel is justified. A few months later he called Christians “blood-sucking vampires” that must be banished from the country. His group also led a demonstration outside Jerusalem’s YMCA in December, protesting against the celebration of Christmas in Israel.

Meanwhile, the graffiti at the Dormition Abbey was painted over in black and red by police, drawing even more attention to the vandalism and failing to fully obscure the messages scrawled on the building. In their statement, the monks of the abbey said that “the Dormition Abbey will not cease to pray for reconciliation, justice and peace — and also for the perpetrators of tonight, that hatred may disappear from their hearts.”