Inspired by the Civil Rights Movement’s Freedom Seder in 1969, 100 Jewish and Palestinian anti-occupation activists read from a Haggadah written in English, Hebrew and Arabic, are joined by MK Mossi Raz and former Knesset speaker Avraham Burg. 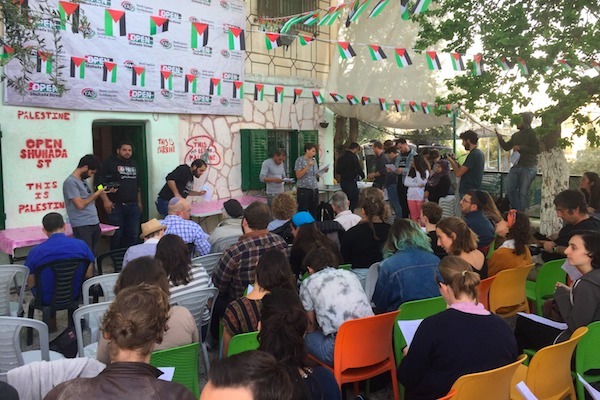 As the setting sun turned the city of Hebron pink behind them, over 100 Palestinians, Israelis, and international activists held a “Freedom Seder” in the occupied city Wednesday, organized by the Hebron-based Palestinian group Youth Against Settlements (YAS) and members of All That’s Left, an anti-occupation collective comprised mainly of North American Jews.

The participants, including MK Mossi Raz (Meretz) and former speaker of the Knesset Avraham Burg, sat together on colorful plastic chairs in the gravel yard of the Youth Against Settlements community center in Hebron’s Tel Rumeida neighborhood.

The event was planned to mark 50 years since the first Israeli settlement in Hebron when the process of dispossession of Palestinian land and homes in the city began, the organizers said.

“Today, as you know, most Israelis are celebrating the Passover holiday, but tonight it [is] different,” Izzat Karake, a Youth Against Settlements leader, said. “Israelis came here to join Palestinians and to tell the others, ‘we are standing for human rights and we are against the occupation.’”

“We are sitting in the same place but we are not equal,” Karake continued. “Because no one is free until all of us are free.” 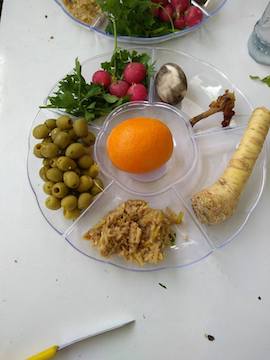 The Seder plate at the Freedom Seder in occupied Hebron, April 4, 2018. (Courtesy of All That’s Left)

Holding the Freedom Seder was not just a call for an end to the occupation but “an affirmation of our commitment to working to the end the occupation,” explained Daniel Roth, a member of All That’s Left and one of the event’s organizers,

Jewish tradition, identity, and culture form the crux of why Roth is working to build a just peace and end the occupation, he added. “A Freedom Seder that weaves together ancient tradition with modern tradition and brings the storytelling at the center of Passover to contemporary struggles is deeply compelling for me.”

The event was modeled on the 1969 Freedom Seder in Washington D.C., when 800 people — Jews, Christians, rabbis, ministers, black and white — commemorated Passover and mourned one year since Martin Luther King Jr’s murder. Arthur Waskow, an American Jewish civil rights activist, drafted the Freedom Seder’s Haggadah, which, in his words, combined “the story of the liberation of ancient Hebrews from Pharoah with the liberation struggles of black America, of the Vietnamese people, passages from Dr. King, from Gandhi.”

“What could be more natural than to celebrate the holiday of freedom together with Palestinians who are struggling for freedom from the occupation in the place where all the troubles started,” MK Mossi Raz told +972 Magazine, as seder participants began eating.

For Avrum Burg, the former speaker of Knesset, that the event took place in Hebron carried additional significance. “My family comes from Hebron, on my mother’s side I’m an eight generation Hebronite,” Burg said. “In the 1929 massacre, half of my mother’s family was killed, and half of her family was saved by Palestinian ‘righteous among the nations’ here in Hebron.”

In comments seemingly directed toward the Jewish settlers and soldiers in Hebron nearly 90 years later, Burg continued, “I say, leave this place for the sake of those who saved us in 1929.” 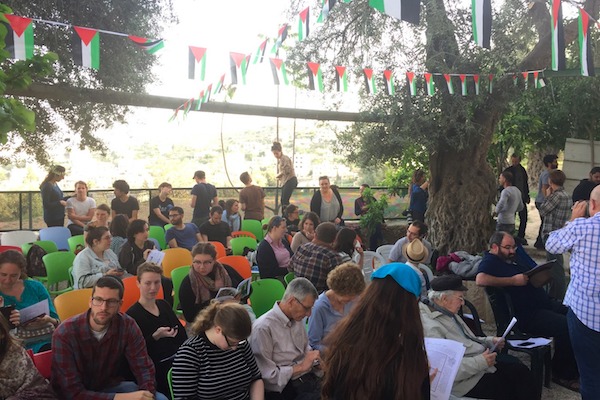 Activists from Youth Against Settlements and All That’s Left took turns reading in Arabic, Hebrew, and English from a Haggadah prepared by the organizers, which included texts they had written about freedom and resistance to oppression, poems by Mahmoud Darwish and Marge Piercy, and creative adaptations of traditional parts of the Seder.

Instead of the typical four children, the Freedom Seder Haggadah featured “the ally child,” “the oppressor child,” “the oppressed child,” and “the one who we pretend simply doesn’t know enough to ask.” The reason for eating matzah, the Haggadah explained, was “to remember oppression in the world and all forms of injustice (our duty for every generation, to remember).”

Addressing the Israeli and Jewish participants before they boarded their buses back to Tel Aviv and Jerusalem, Youth Against Settlements’ Karake noted that 100 people had taken part in the inaugural Freedom Seder. “I hope next time we will be 1,000.”