As soldiers and settlers look on, dozens of foreign Jews join Palestinians in the segregated city of Hebron try ‘to make the unbearable a little more bearable.’ Police detain six Israelis among the group, prevent others from even joining. 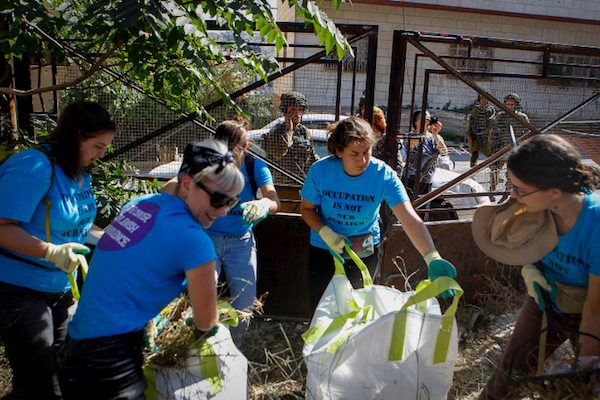 Activists with the Center for Jewish Non-Violence clear brush from the yard of the would-be cinema as Israeli soldiers and settlers look on, Hebron, July 15, 2016. (Wisam Hashlamoun/FLASH90)

The streets in the Israel-controlled section of Hebron were sunny and silent at 9 a.m. on Friday. The Palestinian shops on the main streets were all shut, as most of them have been for over 20 years. Jews were home preparing for Shabbat.

On a sloping street rising through the Tel Rumeida neighborhood where, in April, a Palestinian stabber was wounded, then executed, there is a small commotion. A scattered group of Israeli soldiers, blue-uniformed police, and a few local Israeli settlers are hovering around a battered fence, peering inside as if looking into a cage at a zoo.

Inside there is a group of a few dozen diaspora Jews, many of them American, and a few Israelis. They are singing songs and their shirts say, “Occupation is not our Judaism!” In between protest songs from the 1960s civil rights struggles in the U.S., they chant: “Diaspora Jew say: ‘dai l’kibush!’” [end the occupation], and in accented Hebrew, a chant that translates as: “You have no shame! There’s nothing holy about an occupied city!” Occasionally they sing traditional Jewish melodies, such as the anti-war “lo yisah goy el goy herev” and “hineh ma tov u’ma naim.”

But their main activity is cleaning. The fenced-in plot of land where they are working contains a few dilapidated structures, filled mostly with trash – twisted metal objects, rocks, rusted barrels and ancient piles of natural detritus. With their bright blue shirts and long yellow rakes, the activists project cheer as they rake, shovel, and pass heavy debris along a line of activists. 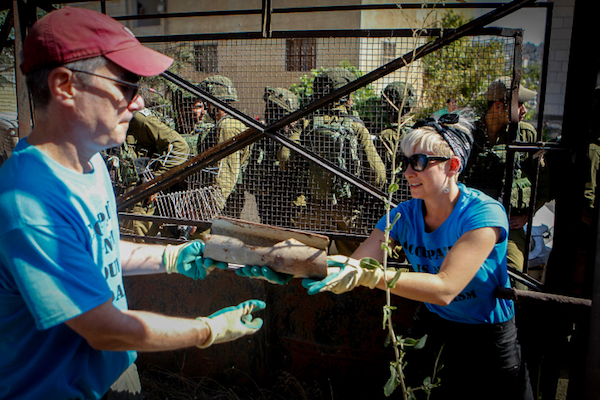 Activists with the Center for Jewish Non-Violence clear debris from the yard of the would-be cinema as Israeli soldiers and settlers look on, Hebron, July 15, 2016. (Wisam Hashlamoun/FLASH90)

The group, called “Center for Jewish Non-Violence,” (CJNV) was invited by Youth Against Settlements, a Hebron-based Palestinian organization to help establish a movie theater in Palestinian Hebron, because the city doesn’t have one. “We want to make the unbearable a little more bearable,” said one of the Jewish participants, who asked not to be named due to professional sensitivities. “We will work until we can’t work anymore.” Their intention, she says, is to work until the day is done, or until they are stopped.

The CJNV group has been in the Palestinian territories for a week of activities, helped planned with another activist group, All That’s Left, doing other direct actions along with Palestinian partners in the South Hebron Hills villages of Umm el-Kheir and Susya.

Enrico is a 27-year-old Italian Jew who studied conflict resolution at Tel Aviv University. He now works with refugees and asylum seekers in Italy. “I’m a Jew, so I feel responsible,” he says. “I care about Israel – I’m not religious but I think it’s important for all Jews to care about Israel and Judaism. And the status quo is unbearable.”

The settlers outside the fence continue to gaze in. They are children. Some call out that it is all their land. Others are trying to figure out what exactly they are watching. Pieces of information filter through and one girl says, “Wait, they’re Jews?”

“Yes,” says her friend. “Don’t you know the craziest ones are our own?”

A boy of about 12 with long, brushed, wavy sidelocks is tossing angry comments at a Palestinian participant through the broken wires. “Go ahead, shovel the stuff!” Then he tells him, “You’re fired! You work for me.”

When he realizes I speak Hebrew, he says: “there’s some shit on the ground you’re standing on, go and pick it up.” The Palestinian is nonplussed. I roll my eyes and talk instead to a small group of settler girls, also in their early teens, watching in a huddle.

One asks, “what are they singing?” I explain that they are songs white and black people in the U.S. sang when they struggled together for blacks who were being oppressed. Her eyes widen as she listens. Encouraged, I add that many Jews joined the struggle of rights for black Americans, rabbis too. Her eyes widen again. “So this is like the black and the white people from back then?”

Abed el-Rahman is a 23-year-old activist with Youth Against Settlements who lives on Shuhada Street. He explains that we are on a private plot belonging to the Abu Aishe family. Indeed, when the Israeli police tell the activists they are trespassers, members of the owners’ family convince them that the land is theirs and they approve the action.

But Israeli forces obstructed the effort in other ways: police lying in wait at a major checkpoint just outside of Jerusalem turned around an entire busload of Israeli activists who were on their way to join the action.

Abed is an English teacher. He explains that effort is a matter of peaceful protest, one that may generate a measure of pride. “There’s garbage here. We want to clear it out and make it clean! We want a cinema. It’s peaceful. We’re not violating anyone’s rights.”

As if to prove his point about the garbage, a giant rat scrambles out from what must have been a long-undisturbed home. It plows through the line of workers, who jump back, and brushes against this fearless reporter’s ankle amidst gasps before disappearing.

Jewish and Palestinian activists now attempting to build cinema with army and settlers at the gate #cinemahebron pic.twitter.com/oss2lwuY4z

Among the Americans is journalist and author Peter Beinart. He acknowledges that he is more accustomed to reading and writing than to participating in actions like this, but is curious to see where it might lead him. A good portion of the young American Jews come from relatively traditional religious backgrounds, he observes, signifying some sort of generational gap. “It makes it harder to write them off,” he says. And the combination of a traditional Jewish background with anti-occupation values represents an identity in which he feels personally comfortable, he explains.

Not all are so comfortable. Another young woman is an undergraduate student back home, where she is active in fighting mass incarceration and institutional racism, in addition to Jewish activism against occupation. She wanted “to put my money where my mouth is” by joining the Palestinians here, but she too asked to not be identified. Her family is religiously traditional, and they are not supportive of what she is doing here. She doesn’t want to talk more about them. “I want to respect their privacy.”

The self-sustaining cheer of the songs and the aura of justice in the participants’ eyes recalls an odd parallel of ideological fact-making from another era: the legendary Passover seder held at the Park Hotel in Hebron in 1968, just after the West Bank was captured. After the seder was over, the national religious Jews who had organized it refused to leave. It became a spiritual touchstone moment for the birth of the sprawling settlement enterprise. Perhaps this action is a bookend to 1968, the beginning of popular Jewish and Palestinian resistance to unchecked takeover of the land. But it is unlikely that creating “facts on the ground” can work for the Left as it has for the settlers.

The anti-occupation activists today talk of establishing a cinema; few if any actually believe that will happen. They had participated in non-violent activism training a few days earlier and had elaborate plans in the event of arrest, an eventuality many of the foreigners and Israelis alike embraced. As if on cue, by around 11 a.m., Israeli authorities ordered the group to leave. Moriel Rothman-Zecher, an Israeli-American activist, informed the officers that the group would not comply. 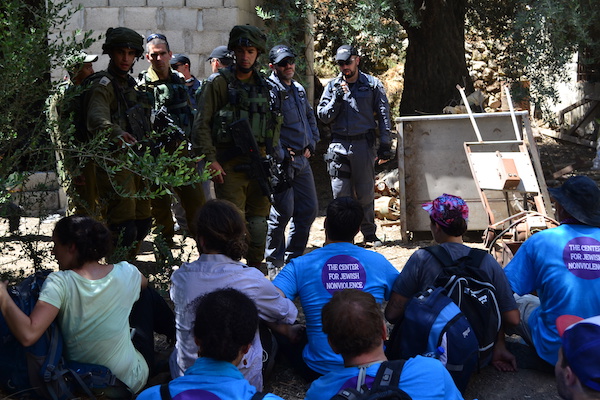 Activists with the Center for Jewish Non-Violence lock arms and sit on the ground as police order them to leave, Hebron, July 15, 2016. (Dahlia Scheindlin) Police detained six Israeli activists for seven hours.

The activists then sat down on the ground – in neat rows, almost as if in a theater – linked arms, and sang.

An Israeli police commander entered the lot with some soldiers and a few riot police in tow, and indeed announced that the area was, starting now, a closed military zone. The activists had three minutes to leave – “and if not, we will help you to leave, including with force,” he said, in English. The activists did not move. The riot police leaned in and helped each person stumble up, walking the first row out.

Six activists with Israeli ID cards were detained and taken to the police station in Givat Avot (“Hill of the Patriarchs”), a one-street settlement neighborhood with an army post and a gate at the entrance, near Kiryat Arba. The rest of the group presumed that only the Israelis had been arrested because police wished to avoid the unsavory image of Israeli authorities arresting diaspora Jews. They decided to march in the now-burning sun from Hebron, down segregated Shuhada Street, to the police station about 20 minutes away, uphill.

On one stubbly brush path, soldiers blocked them. A 27-year-old activist, a newly-minted PhD in philosophy, insisted that they wished to reach their detained friends, and demanded to be addressed in English. “It’s not a dialogue,” one soldier responded. “You do not pass.” She asked to see the military order that gave him the authority to block them. He radioed to a base somewhere. “I need the order,” he said in Hebrew. “Just photograph it and send it.” Another soldier muttered to the other: “Wow, they’re stubborn.”

After seven hours, police released the six activists on the condition that they not return to Hebron for 15 days.