With the help of hundreds of American Jews, Israeli and Palestinian activists, two Palestinian families returned to land the Israeli army expelled them from decades ago. 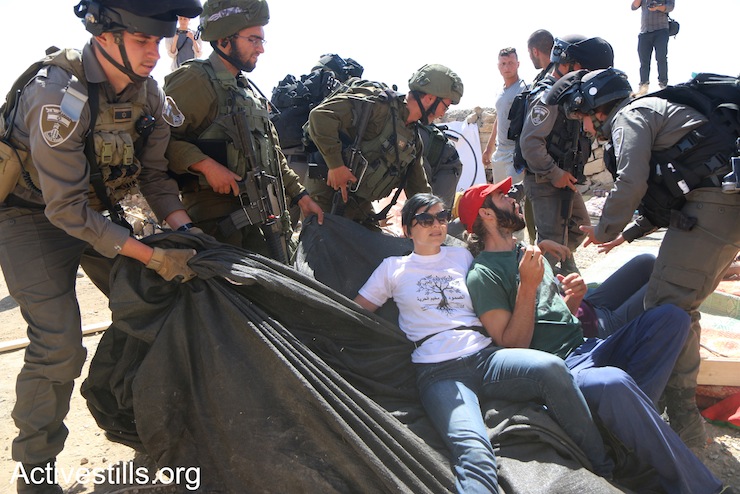 A little over a month ago, accompanied by over hundreds of Jewish-American, Palestinian, and Israeli activists, adel Aamer returned to the land from which the Israeli army expelled him some two decades ago. In the weeks since, some 500 people helped restore two cave homes and put their bodies on the line to ensure Aamer and his family could return to their land.

Now most of the foreign activists have gone home, and a secondary stage of solidarity work, primarily manual labor helping to clear dirt and rocks from cave homes, came to an end along with the Muslim holy month of Ramadan. Now the activists are moving into a longer-term phase of supporting the Aamer family’s continued presence on their land.

Speaking to +972 Magazine during a visit to Sarura several weeks ago, Fadel Aamer said that he has no intention of leaving his land again. “I will be buried here,” Aamer said, adding that he had waited many years for the right opportunity to return, which ultimately came in the form a coalition of Jewish-American, Israeli, and Palestinian activist groups.

In a statement Tuesday, the organizing coalition, composed of the Holy Land Trust, Combatants for Peace, All That’s Left: Anti-Occupation Collective, and the Center for Jewish Nonviolence, said that:

Since the founding of Sumud: Freedom Camp on May 19th, over 500 Palestinian, Israeli, Jewish, and international activists rehabilitated the ancestral caves of the villagers, flattened roads connecting Sarura to adjacent villages, planted gardens, maintained a constant presence on the land, and established Sumud: Freedom Camp as a defiant embodiment of co-resistance to the Israeli occupation. Two families have returned to Sarura.

Following June 26th, the organizing coalition will maintain ongoing solidarity with the families of Sarura. The revival of Sarura as an autonomous community fulfills the coalition’s mandate to stand with the families in their call to self-actualize their right to home, livelihood, and safety. In the face of three military raids and continued settler antagonism, Sumud: Freedom Camp stands as a shared community space to come together in pursuit of freedom and dignity for all.

The coalition will continue its resistance to the Israeli occupation and the systematic oppression and displacement of Palestinians. The coalition’s Invitation to Celebration in Ongoing Resistance stated, “Sarura is on the map and the possibilities of mass civil disobedience, community building, shared struggle, and solidarity work will expand until the oppression of the Palestinian people ends, and the human and civil rights of all are recognized unequivocally.”

The activist groups and the Aamer family marked the conclusion of the initial phase of Sumud: Freedom Camp with a celebration earlier this week that coincided with the Muslim holiday of Eid al-Fitr.

“We celebrate, not to bring to a closure, but to launch a new start with greater commitment to steadfastness, nonviolence and advocacy with the families in the South Hebron Hills region,” said Sami Awad, director of the Holy Land Trust. “We recognize that attacks by those who don’t want to see Palestinians reclaim their rights in the region will not end and therefore our stand will remain.”

While Palestinians in the West Bank have been engaged in nonviolent protests against Israeli occupation for many years, and Israelis have joined them in solidarity, Sumud: Freedom Camp was likely the biggest delegation of diaspora Jews ever to come Palestine in order to engage in direct action protests and civil disobedience against Israeli policies in the West Bank.