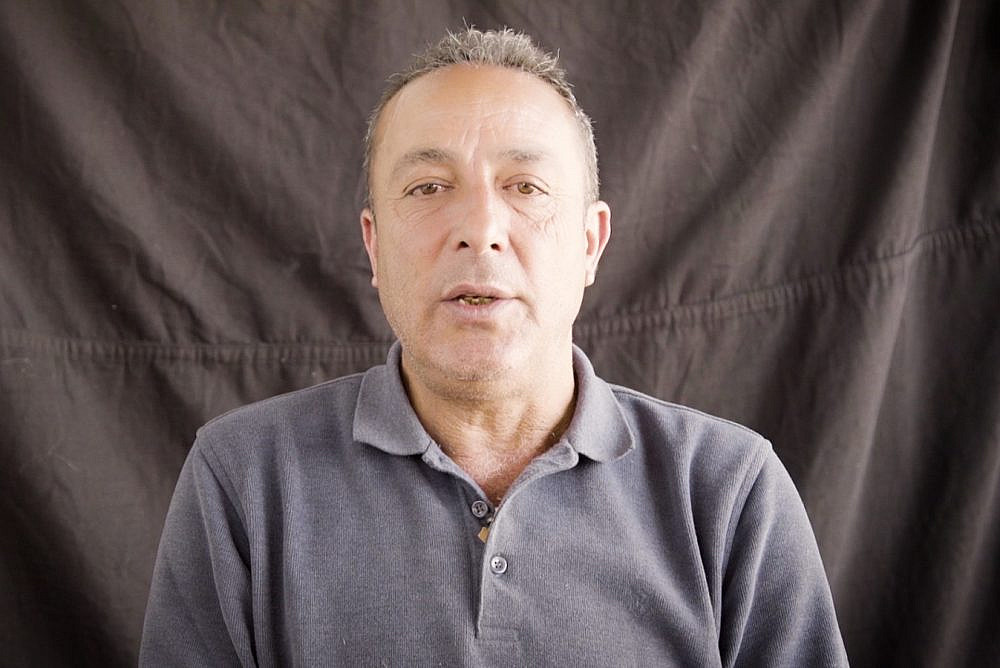 Yacoub Rabi was driving his wife Aisha back from Hebron to the northern occupied West Bank on an October night in 2018 when his life changed unrecognizably. The two were returning from Aisha’s dental appointment, scheduled in the days leading up to her daughter Salam’s wedding.

When they approached Tapuach Junction, not far from their home village of Bidya, a group of settler teenagers standing above the road dropped large rocks on their car. One of those rocks crashed through the windshield and hit Aisha, killing her almost instantly. Rama, their eight-year-old daughter, was in the car when her mother was killed.

“These were not stones — they were boulders,” Rabi says. “I saw their shadow because [the settlers] stood 10 meters above the road so that they could see me, but I could not see them. A boulder weighing over two kilograms flew through the glass and hit my wife’s head. At first, I thought she was only injured but when I got to the hospital, I realized she was killed on the spot. I did not think she would die in seconds… I will never forget that night.”

Rabi is one of four Palestinians and Israelis who will tell their story on Monday night during the 15th annual alternative Israel-Palestinian Memorial Ceremony, which commemorates the deaths of both Israelis as well as Palestinians who have been killed over the years. Israeli leaders and right-wing figures routinely criticize the ceremony, organized by Combatants for Peace and the Parents Circle-Families Forum, and often try to prevent it from taking place for what they say is the commemoration of Palestinian terrorists.

Last year, Prime Minister Netanyahu denied entry permits to 176 West Bank Palestinians from bereaved families who hoped to participate in the ceremony, which is held in Tel Aviv. Because of the coronavirus, this year’s ceremony will be held via Zoom.

‘I want my words to reach the whole world’

Rabi says that since Aisha’s death, his family has received no assistance from either Israel or the Palestinian Authority.

“At first everyone said they would help, but after a few days they all ran away,” Rabi adds. “People come, take a selfie, and go home. There is no one to help you, no one knows you. I was left to take care of everything alone.”

“I have eight children, six girls and two boys. All of them went to university except for the younger two. The daughter whose wedding we were preparing for is called Salam, which means peace. All of my children’s names have to do with peace.” Since her mother’s death, Rabi says Rama prefers to sleep at her sister’s house.

“I was left alone,” Rabi continues, “it’s hard for me to walk around the house by myself. Everything reminds me of her. You know, Aisha studied at university. We married when she was 15 years old, back then there was no law against that. After 17 years she went back to study with her daughters and got her economics degree,” he said as his voice broke. “I have 10 chairs around the table, today I sit on a small chair on the side. I cannot sit alone at the table.”

Rabi says that since that night in October 2018, he has lost much more than his wife. “I was a contractor. Everything is over, everything was destroyed. My business died. People call to get a price estimate, but when I arrive, they see my face, recognize me from the television, become afraid and say, ‘His wife died, maybe he’ll make trouble,’ and never get back to me.”

For Rabi, leaving the house and seeing people is difficult, particularly because everyone he meets asks him when he will get re-married and how much money he got from Israel. He does his best to avoid the place where his wife was murdered. “I go around that road. I cannot pass by there; it reminds me of many things. My children won’t go there either.

“I haven’t been out of the house at all after dark for nearly two years, like a curfew. Before that I used to go out with my wife and kids to restaurants, we used to take walks, I haven’t been anywhere for two years.” With considerable effort, he controls his trembling voice and adds, “It’s hard for me. Very hard.”

Rabi has little faith the legal proceedings against the four young settlers, who were arrested and have since been released to house arrest, will bear fruit. 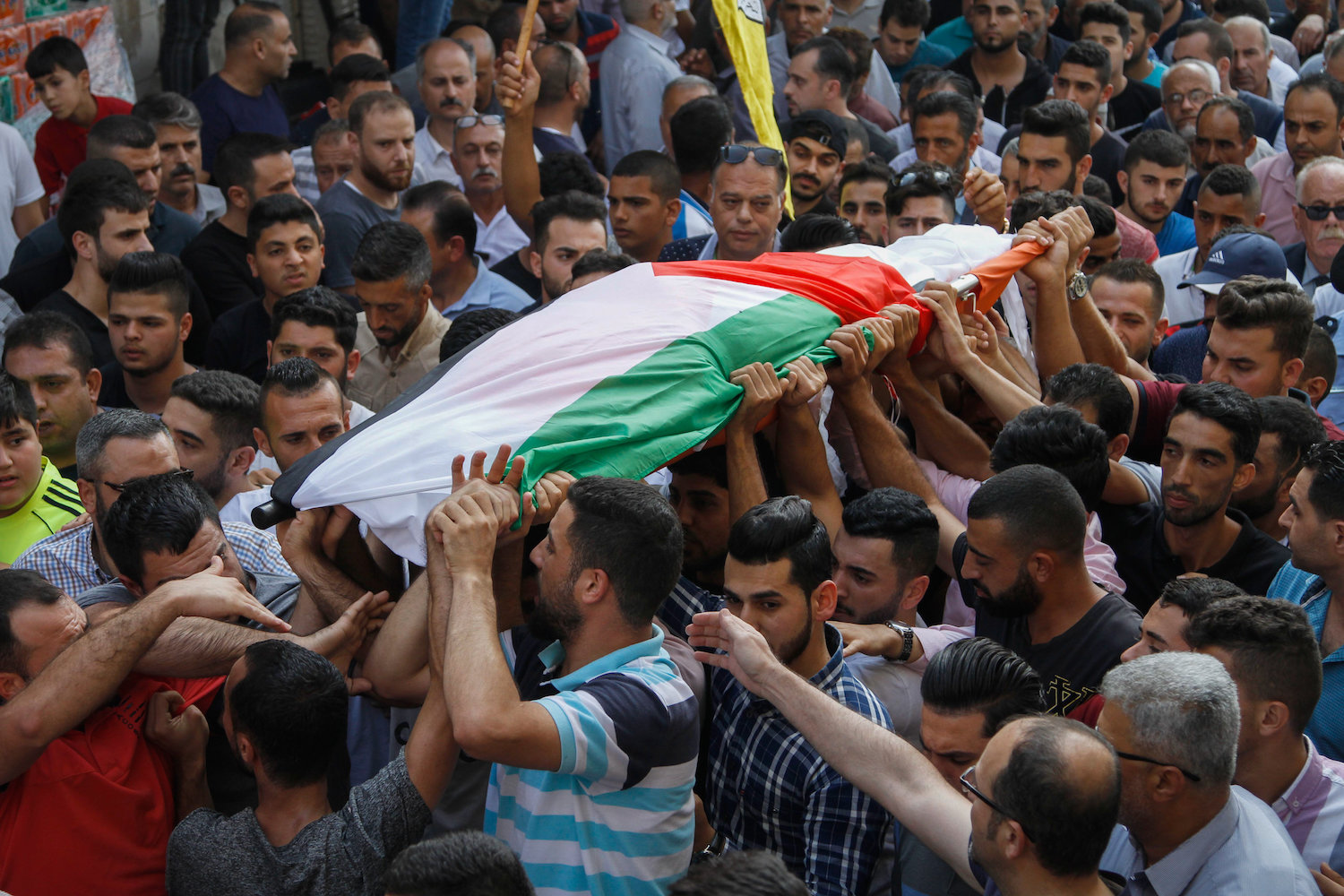 Palestinians carry the body of Aisha Rabi, who was killed by settlers while driving in the West Bank, during her funeral in the West Bank village of Bidya, October 13, 2018. (Nasser Ishtayeh/Flash90)

“There is no justice in the courts. Anyone who tells you otherwise there is a liar. I can be arrested for months for a traffic violation, but they have all been released, even though their trial is not over. Nothing has happened for months.”

At first, Rabi says, he would still come to the courthouse, “but we do not know what is going on inside the actual courtroom. I don’t know how your laws are made. I am not allowed to enter the court. I once went to the Supreme Court to protest the decision to release [the settlers] from house arrest, and as soon as they arrived, we were removed [from the hall]. Neither myself nor my lawyer are allowed to see the case or the investigation. I spoke of peace and justice from day one, but now my wife is gone, and nothing happened. I’m alone. Everyone went away. They are far away.”

And yet, when Rabi speaks about the boys who killed his wife, there is almost a sense of compassion in his words. “These children need to be taught. I once told their parents (of those accused of killing Aisha – O.N.) to come and see how I take care of my children, so that they can take care of their children instead of leaving them to throw stones on roads without school or anything else, so they learn to steal and murder. They can learn from me how I treat my eight kids, how I raised them. Everything I have is for them. If you brings children into the world, take care of them properly, otherwise they will learn bad things.”

Rabi hopes that the Alternative Memorial Day ceremony will allow his message to resonate with people outside Israel-Palestine. “I want my words to reach the whole world. I believe in peace. Even now I believe in peace. I am not against anyone’s religion or color. We are all human, we all want peace and to live quietly. Not only for me, but also for my children. We have a right to live, to walk around, to pray, to laugh. I want to sit with Jews, with Christians, to eat with them, to live with them. I do not want to live alone. That’s what I want from the world. I don’t want the coronavirus. I don’t want terrorism.