According to reports, the secretary of state has accepted Netanyahu’s demand that Israel be recognized as a ‘Jewish state.’ 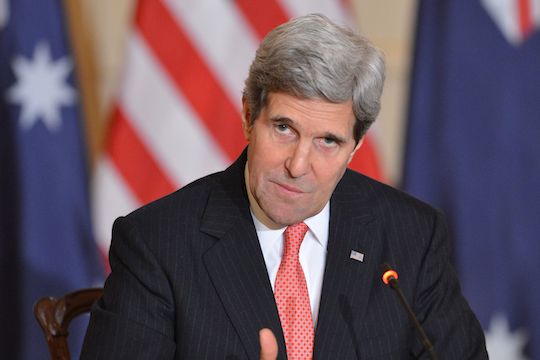 U.S. Secretary of State John Kerry. Adopting a term put forward by the Israeli right, and opposed to by most of the Knesset (Photo: State Dept.)

I added an important update to this post, see below.

Haaretz’s Barak Ravid reported Wednesday that U.S. Secretary of State John Kerry is demanding that Arab leaders pressure the Palestinians to recognize Israel as “a Jewish State,” or at least not protest if he can get Abbas to agree to such terms. This is yet another confirmation that the Obama administration has accepted the new demand posed by Netanyahu, and that it is intended to be a part of its proposal for a two-state settlement.

I find this move – and the indifference with which it was met among the Israeli-American peace camp – simply astonishing. The demand to recognize Israel as a Jewish state originated in the Israeli far-right. The Left never demanded it, nor did any prime minister who negotiated with the Palestinians prior to Netanyahu. Even today’s elusive center sees no importance in it; Labor, – they never saw it as necessary (Correction: Livni and Olmert spoke on a recognition of Jewish State in 2007-2008, but none of them, especially not Olmert, made it such a central element in their policy; Olmert later attacked Netanyahu for insisting on this issue). Even Finance Minister Yair Lapid, has taken hardline positions on other issues, came out publicly against these new terms. In other words, there was a Knesset majority against this idea.

But all of this is history. Now that Kerry has accepted the demand, it will be the starting point for every future negotiator since no mainstream Israeli politician can take a position which is to the left of the the White House on the Palestinian issue.

This is not just bad politics – there is something fundamentally flawed in the idea. Bernard Avishai has a good piece about the issue in the New Yorker (I made my own argument against it here) but for now I will just say this: would anyone in his or her right mind demand the United States be recognized as a white nation? Proportionally, there are more Palestinian-Israelis than there are blacks in the U.S., by the way. Isn’t the nature of the state a topic for its own citizens to discuss and determine? What if Arab citizens and Jewish liberals joined forces to advocate for a colorblind, ethnicity blind democracy? Will they still need to run this by the State Department?

I guess that Secretary Kerry believes that there is some positive trade-off here: maybe if he can get the Palestinian Authority to agree to these terms Netanyahu will be able to swallow the notion of a final status agreement based on pre-1967 borders. But what is the price of it all? This is worse than the entire wave of anti-democratic legislation we’ve seen in recent years. Who can really blame Liberman for advocating more rights for Jews only, or Avi Dichter for wanting to cancel the status of Arabic as an official language, if the entire international community is to recognize the ethnicity of the state apparatus? Or perhaps we must settle for lip service regarding equal rights for non-Jews, in the same way blacks would enjoy equal rights under a white state?

And what about all those liberal Jewish groups – New Israel Fund, Americans for Peace Now, J Street – that based much of their advocacy in recent years on the battle “to save Israeli democracy?” Are we to throw our Palestinian friends and partners under the bus and forget the moral and spiritual essence of our political battles in the name of this push for the two-state solution and for the sake of an administration headed by the Democratic Party? I simply don’t get it.

UPDATE: I was contacted by several people which noted that J Street, APN (and NIF) never supported Netanyahu’s demand to recognized Israel “as a Jewish state.” This is obviously true – see here, here and here – but my point was about the failure to criticize the U.S. Secretary of State for accepting this term and for his intention to include it in his proposal for a final status agreement to the parties. The fact that all those peace groups are very much aware of the potential damage here – both for the peace process and for Jewish-Arab relations in Israel – only highlights the need to confront Kerry on this issue.

Still, it shouldn’t be understood that anyone of these organizations is supportive of this demand.

Related:
Why I oppose recognizing Israel as a Jewish state
‘A Jewish and Democratic state is a zombie idea’
‘Religion and politics’ in Israel: The mythology of Jewish nationalism

BECOME A MEMBER
More About The peace process