The night that Jonathan Pollak was sentenced to three months in jail, I dreamed that I was thrown in jail too. That dream was probably partly a manifestation of the deep connection that all long-term couples feel; but it was also the expression of a growing feeling of apprehension regarding the future of all of us living in Israel.

Over the two years that I lived with Jonathan, we have shared many sleepless nights. There was the three-week criminal assault on Gaza in the winter of 2008-9; then the killing of demonstrators in Bil’in and Nil’in; the introduction of anti-democratic bills in the legislature; and countless political arrests. And then Jonathan was sentenced to three months in jail just for being who he is – a highly visible and committed anti-occupation activist.

On Tuesday, after another sleepless night, I, together with his immediate family and a small group of supporters, accompanied Jonathan to prison. 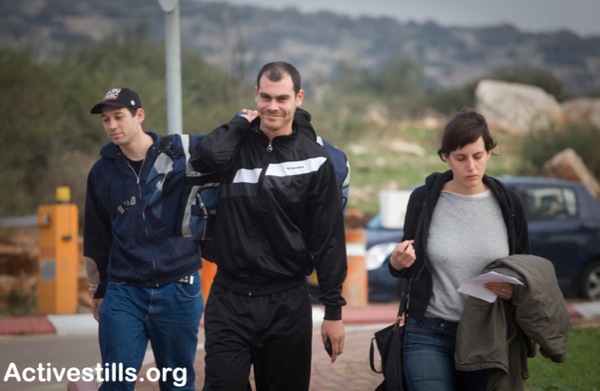 At the exact time that he was entering the prison to start serving his sentence, the courts were discussing the fates of two other activists – Abdallah Abu Rahmah, a member of the Popular Coordinating Committee of Bil’in, and Ameer Makhoul, director of Ittijah, a Palestinian-Israeli NGO based in Haifa. Just as I was parting from Jonathan for three months, Abdallah’s wife Majida, and Janan, Ameer’s wife, parted from life partners who are serving long jail sentences for their opposition to the occupation. Abu Rahmah has been in a military prison for more than a year because he organized demonstrations against the separation barrier; Makhoul is set to serve many years in an Israeli prison after the Shin Bet accused him of espionage, based on classified evidence that his defense attorneys are not allowed to see.

Women like Janan and Majida remind us that it is not only those who sit in jail paying a price for Israel’s policies. Tens of thousands of families pay the price of the occupation on behalf of 8,000 Palestinian political prisoners sitting in Israel’s prisons. People who are afraid to speak on the street, lest they be identified as Arabs by their accents, also pay the price of the racism engendered by the occupation; as do those who practice self-censorship at work, lest they lose their jobs; as do people who cannot find a place to live, because landlords won’t rent to Arabs.

Even though I, like Jonathan and like many others, will not be deterred by the price still to be exacted by the struggle against the occupation, I know that there is another way. We can stop the rampant racism and the witch-hunts initiated by the current legislature. In fact, we must. If we do not stop them now, we will find ourselves in one big prison – a prison called the State of Israel.

Eilat Maoz is the coordinator of the Women’s Coalition for Peace. A version of this opinion piece was published in Hebrew by Yedioth Aharonoth on 12 January 2011.