In what might be a shot to the heart of current peace negotiations, Netanyahu is reviving plans to build a ‘security fence’ in the Jordan Valley. If the fence follows the original route it will enclose any future Palestinian state, cement impossible Bantustan borders and give birth to a new map of Israel’s borders. 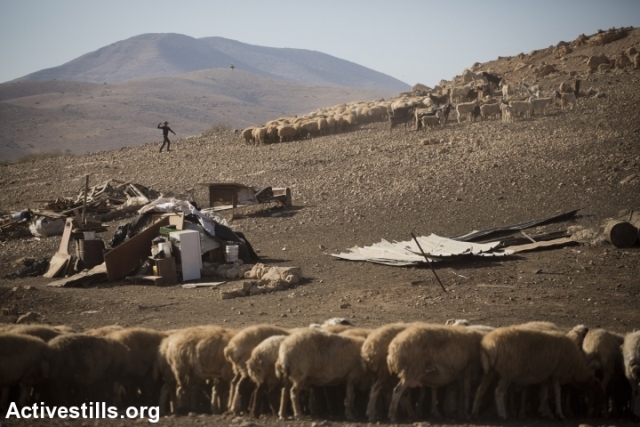 Ten years after international pressure led Israel to scrap construction plans for the Jordan Valley section of the security/separation fence, Prime Minister Benjamin Netanyahu is on track to revive them. Two Ma’ariv – Makor Rishon correspondents on Sunday reported that several government ministries are already making preparations for the project and that Netanyahu himself will order the commencement of construction once the Egyptian border fence is completed. According to Ma’ariv, the official excuse for constructing the new segment is the fear that Syrian refugees now staying in Jordan might infiltrate — although there are no known reports of Syrians trying to make it to the West Bank from the Hashemite Kingdom — and “closing the Israeli border.”

However, the correspondents also mention the un-coincidental timing in which Netanyahu made his plans known: just as negotiations with Palestinians seem to be hitting a dead end, with the question of sovereignty in the Jordan Valley reportedly being one of the central obstacles. Just last week Netanyahu made clear at a Likud conference that he considers Israeli control of the Jordan Valley a key strategic issue and a red line for all future agreements.

It is still unclear where exactly Netanyahu plans to build his fence. When West Bank separation barrier maps were originally drawn about 11 years ago, however, they included plans for a fence that would separate most of mountain area, where the vast majority of Palestinians live, from the vast expenses of the Jordan Valley. American objections to that route led to its cancelation as early as 2003, as well as to the halt of construction of whole segments of the fence/wall east of Jerusalem and in the south Bethlehem/Gush Etzion areas, leaving large gaps in the planned route of the barrier to this day.

Considering the implications of political annexation in the existing fence and Netanyahu’s desire to ensure Israeli control over the Jordanian border, it wouldn’t be outlandish to presume Netanyahu wishes to build his fence along the original route. The result would be completely surrounding the Palestinian territories in the West Bank with Israeli fences, removing any and all land borders it might share with another state (aside from Israel) and finalizing the process of Bantustan-ization of any future Palestinian state/autonomy. 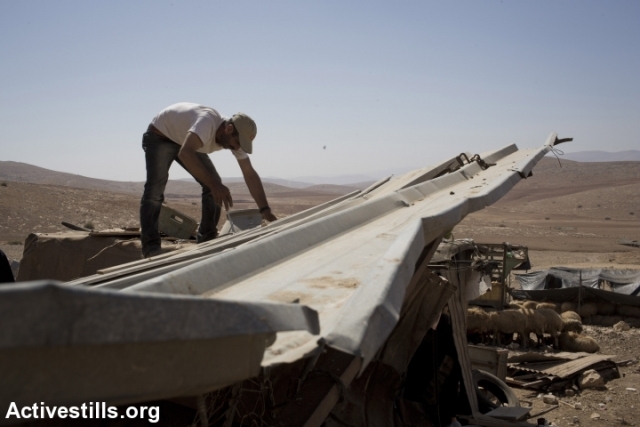 The Jordan Valley has long been one of the most central but least-considered and rarely discussed problems of the occupation. Ehud Barak’s plan for maintaining Israeli control in the Jordan Valley was one of the reasons Yasser Arafat rejected his “generous offer” in 2000.

In the decade since, Palestinian freedom of movement has been increasingly and extremely limited in the Jordan Valley, all while Israeli settlements and agricultural land grabs continued growing. At the same time — and increasingly so in recent years — Israel has been demolishing large numbers of Palestinian villages in the Valley, claiming they are located in the middle of military training grounds. In addition, the state has been trying to push Jordan Valley Bedouin communities into other areas of the West Bank. Haaretz‘s Amira Hass keeps track of these demolitions and describes them as a process of ethnic cleansing. Building the fence might be the final step in turning the area into a Jewish-only strip of frontier land, which large parts of the political leadership consider essential for Israel’s security.

The Ma’ariv story also mentions that Netanyahu is pushing to finalize border fortifications in the Golan Heights. Putting all these pieces together – the new anti-African asylum seeker fence on the Egyptian border, the Syrian border fence and now the Jordan Valley barrier – it looks like Netanyahu is making a final push at guaranteeing his place in Israeli history as the prime minister who surrounded the entire country with fences and walls, not only for security and demographic reasons but also to demarcate what territory the Jewish state will hold on to in the long run, regardless of peace talks or international criticism. 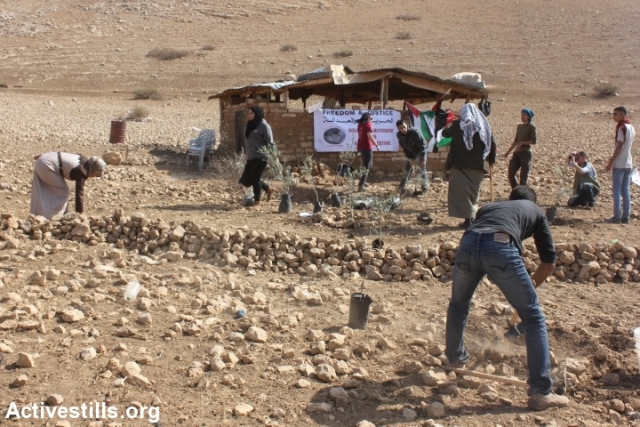 Activists and locals in a joint action in Jordan Valley village of Samra, 2.11.13 (Activestills)