“Pictured is Zehava Weiss, who was injured earlier this year when Palestinians threw bricks at her windshield. Reporters on the scene were positioned to film the ambush and did nothing to stop it.” 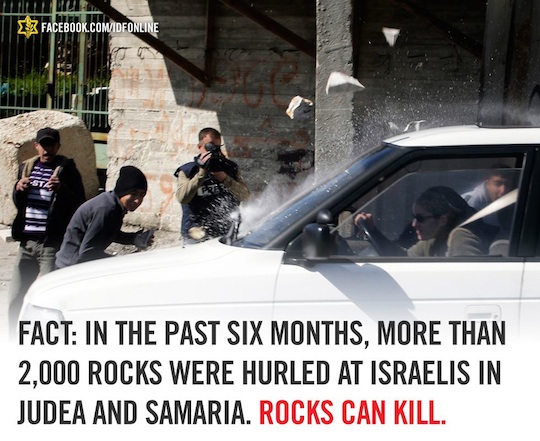 The status update above, on the Israeli military’s Facebook page last week, exposed its dangerous misunderstanding – and outright perversion – of the role of journalists in conflict situations. This potentially endangers both the lives of journalists and their ability to freely expose situations of conflict to the wider public.

In the status, the army accused journalists of failing to intervene to prevent a rock-throwing attack on an Israeli vehicle in a Palestinian village. The caption implied photojournalists at the scene erred, acting immorally and unethically when they refrained from jumping into the fray to act as would armed enforcers.

The post garnered significant public attention. At the time this column was written, it had 1,839 likes, 1,420 shares and 260 comments. Many user comments were run-of-the-mill racism: “Jihadi scumbags”; “Islam = Wrong religion and real Hate against God and Humanity”; “Put up the wall around that road to keep those animals from throwing stones or just push them over the Jordan river like rabbi kahane suggested that only solution.” Many of the comments also called directly for the murder of Palestinians.

But there is an additional problem.

While repeatedly claiming to “respect the importance of free expression and journalism,” the Israeli military simultaneously promotes public campaigns – as illustrated by this Facebook status – aimed at delegitimizing journalists and undermining the fundamental role of journalism in Israel’s purported democracy.

Responses to the post revealed a widespread misunderstanding of the media’s role:

“Reporters who stand and film horrors should be put on trial as accessories to whatever.”

“SHAME ON THE REPORTERS FOR NOT HELPING THIS WOMAN in this ambush! COWARDS are the only words to describe these reporters!”

“They are not reporters they are evil accomplices – no difference to the murderers!”

One of the most problematic responses to this post expressed a certain satisfaction with violence against journalists:

“Shoot to kill in return. Reporters are collateral damage. Always felt most were scum anyway.”

The Israeli military – and the public it has drawn in its wake – is apparently not entirely clear on the occupational distinctions between journalists and private security contractors.

What should be priority for journalists: reporting or saving lives?

The IDF’s PR machine appears ignorant of the dialogue between the Israeli media, military and justice system regarding the ethical responsibilities of journalists in conflict, described in a comprehensive Haaretz article from 2003.

That year, the Israeli Press Council added a clause to its charter of ethics entitled “Saving Lives”:  “The moral and legal duty to proffer assistance to a person who … faces grave and immediate danger to his life or to his body applies also to a journalist in the course of his journalistic activity.”

This approach, one of many, remains highly contested by journalists.

On one hand, a journalist is bound by the nature of his or her profession to avoid taking sides. We must walk a delicate balance and occupy a position of neutrality in order that we may work freely without fear of retaliation, something that would harm both the individual journalist as well as wider public access to free news coverage and information.

In 1998, Israeli photographers drew harsh public criticism after they refrained from coming to the aid of soldier Assaf Miarra when he was attacked by a group of Palestinian students near Ramallah. Realizing they could have faced personal danger, the photographers decided to continue documenting rather than act as riot-control police.

Indeed, a decision to intervene can result in a dangerous outcome. In 1996, an Israeli television crew perched on a tower filmed an exchange of fire between Israeli troops and Palestinians at the Erez crossing between Gaza and Israel. The crew became the targets of Palestinian fire after one of them began assisting Israeli troops, signaling to them the positions of Palestinian officers. His crew’s “immunity” was compromised the moment he began collaborating with Israeli military forces and two journalists were seriously wounded.

On the other hand, a decision to intervene has also proven in the past to save lives.

During Israel’s 2005 withdrawal from Gaza, a Palestinian man was wounded when he was attacked by settlers. Journalists in that situation chose to put aside their cameras and notebooks to assist in evacuating the wounded man from the scene.

There exists a very important debate on whether and how journalists should intervene in conflicts. But the problem presented by the Israeli military’s Facebook status simplifies this complex dialogue, placing exclamation marks where question marks might have been more appropriate.

This status is just the latest stage in the army’s ongoing promotion of a paradigm in which journalists are perceived as – at best – a nuisance that should be recruited as collaborators or – at worst – an enemy that may be violently targeted.

This Israeli military assault is carried out on two fronts: virtually, when it uses social media to delegitimize and incite violence against the media; and much worse, when its soldiers aim their weapons directly at journalists in a clear pattern of intimidation and outright assault.

In July 2011, Israeli troops opened fire with tear gas grenades on me and other news photographers in the West Bank village of Nabi Saleh, and threatened us with arrest. Half a year after I filed a complaint, the army issued a statement defending and justifying its attack.

In September 2008, Border Police fired tear gas grenades on photographers in the West Bank village of Ni’lin. Then-chief photographer at Reuters’ Jerusalem bureau confirmed Israeli attacks on the media were routine in Ni’lin.

Such direct assaults on the media happen on a regular basis, during the course of almost every protest in the West Bank.

Attacks on press freedom are certainly not unique to Israel. Indeed, media suppression of varying degrees has been recently reported in countries including the Ivory Coast, Egypt, Ethiopia, Russia, Syria, India, Argentina, Spain, Japan, and Mali.

But a survey of international journalist advocacy organizations has not revealed any recent incidents in which a government military force – aside from the Israel Defense Forces – has called on journalists operating in the territories under its control to directly involve themselves in conflict situations.

Journalists in a democratic society must be ensured the freedom to work and document without being subject to demonization or physical attacks.

When the Israeli military targets journalists, it undermines the free, protected press – one of the most basic characteristics and ideals of a free and democratic society.

Mati Milstein is a freelance photojournalist who works in the West Bank and Israel. Visit his website here.