The conflict over Jerusalem’s Temple Mount has been a sticking point in Israeli-Palestinian negotiations for nearly 15 years. But as time goes on, it becomes clearer that the zero-sum game between Muslims and Jews is but a grim reflection of the reality of the occupation. 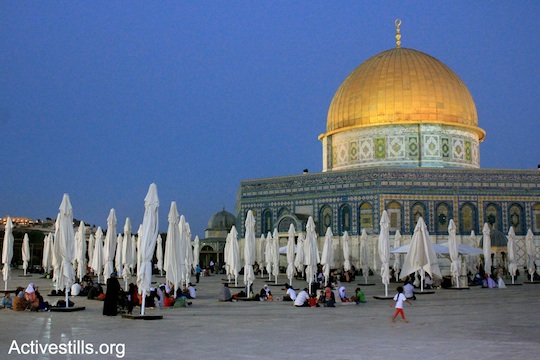 Imagine religious Jewish and Muslim pilgrims praying together at a shrine venerated by both communities. Imagine Jewish and Muslim custodians of the shrine working cooperatively to preserve the site and its religious artifacts, and to ensure that all who come for worship can do so freely and without fear for their safety. This may all sound surreal to those following the Temple Mount controversy which is once again simmering, yet this example of harmonious co-existence was the reality for many centuries during medieval times in places such as the Prophet Ezekiel’s shrine in Kifl, Iraq.

The Temple Mount, which was captured by Israel in the 1967 War yet is administered by the Jordanian Islamic Waqf, is arguably the holiest site in all of Judaism. It is the ground upon which the First and Second Temples – for over 1,000 years the epicenter of all Jewish life – once stood. For Muslims, the courtyard is called the Noble Sanctuary, home to the Al-Aqsa Mosque and the Dome of the Rock, both of which are interwoven into the tale of Muhammad’s night journey from Mecca to Jerusalem on his winged steed al-Buraq, and ultimately, his ascension to heaven. While Jews are allowed to tour the grounds of the Temple Mount, the Waqf has imposed a ban on Jewish prayer.

The crux of the current Temple Mount debate is two-fold: should Jews be given the right to pray on the Temple Mount; and what can be done to better protect and preserve Jewish artifacts on the Temple Mount? At first blush, it seems only fair to allow Jews to pray there and to allow Israeli archeologists to care for relics of religious significance. It is, after all, under Israeli control (for now) and Muslims are free to pray there – so why not Jews? Such bizarre circumstances leave one wondering why such ostensibly reasonable requests for equal access and religious rights have gone unmet? What is preventing a solution comparable to Kifl?

In short, these seemingly benign requests are being sullied, fairly or unfairly, by the identity and questionable motives of the activists who seek change – members of the religious-Zionist settler community. The recent spike in Jewish prayer on the Temple Mount, and the push in the Knesset for new laws regarding the status of the Temple Mount, is a two-pronged strategy spearheaded by settler rabbis and their representatives and sympathizers in Israel’s right-wing coalition government, (especially in the Jewish Home party and Likud MK Moshe Feiglin). Many of the provocative calls to prayer are made by a messianic organization called the Temple Institute, whose mission is to rebuild the ancient Jewish Temple on the Temple Mount grounds – thereby destroying both the Dome of the Rock and Al-Aqsa Mosque.

It is in this context that we must view the Waqf’s rejectionist stance regarding Jewish prayer on the Mount, a stance echoed in sentiment by the Palestinian Authority. From their perspective, Jewish prayer on the Temple Mount is a precursor to another land grab by Israel – a precedent ingrained into Palestinian collective consciousness by the continuation of Israeli settlement construction in the West Bank and the renewed calls for West Bank annexation by the very same voices demanding “fair” treatment for Jews on the Temple Mount. This is in addition to the Palestinian narrative of historical victimization on the Temple Mount and the symbol and imagery of Al-Aqsa as a rallying cry for the Palestinian national movement. This narrative accuses Jews of desecrating the mosque (to be fair, similar accusations are being made by some in Israel regarding the desecration and destruction of Temple artifacts by the Waqf – in effect, a de-Judaization), accuses Israeli archeologists of digging under the Al-Aqsa so that it will collapse, and accuses the IDF of arbitrary age, gender, and geography-based restrictions placed on Muslims attempting to worship on the Temple Mount during Friday prayers.

With this legacy of physical and spiritual encroachment in mind, it is not surprising that there has been an almost-reflexive refusal by Waqf officials to accommodate such dubious requests for “access” to the Temple Mount, especially from those who overtly seek to Judaize most, if not all, of historic Palestine. Given the political climate of distrust and bad faith where any concession in remark or deed is seen as a sign of weakness, it is also no wonder that the Waqf and PA President Mahmoud Abbas venture so far as to publically question whether a Jewish Temple even existed on the Temple Mount. For them, a Temple Mount that is basically Judenrein is better than one that is Judaized – a false choice borne out of the political realities of the Israeli occupation.

It is worth noting that in challenging the status quo of the Temple Mount, these religious-Zionist rabbis and their congregants are also challenging traditional Jewish law concerning worship on the Temple Mount. For a good portion of history, Jews were banned from visiting the Temple Mount, not only because of the anti-Semitic policies of various Christian and Muslim conquerors, but also because of rabbinic decree on the issue, which since the pre-Israel time of Abraham Isaac Kook (1865–1935), who served as Chief Ashkenazi Rabbi of British Mandatory Palestine, proscribes Jewish visitation due to the possibility of the ritually impure walking upon, and thus desecrating, the Holy of Holies – a room housing the Ark of the Covenant where only the high priest may enter on Yom Kippur. This law was confirmed by Israel’s chief rabbinate in 1967 and again in 2013 after incidents involving Jewish prayer on the Temple Mount began to increase. It is illuminating that these settler rabbis will contravene halacha in order to fulfill their expansionist aspirations. Such prioritization of territorial acquisition at the expense of well-established religious law casts these rabbis’ character as apolitical religious figures merely seeking worshipping rights further into doubt.

The current stalemate regarding the Temple Mount is a vivid reminder that peaceful co-existence and the prospect of joint custodianship will remain elusive absent a final and comprehensive peace agreement between the Palestinians and the Israelis. A portentous infusion of Jewish ultra-nationalism and religious extremism now looms over the Temple Mount, rendering the chance for a solution comparable to Kifl bleak indeed. That the issue of Temple Mount worship has become a zero-sum game between Muslims and Jews is a grim reflection of the reality of the occupation. Unilateral Israeli moves, led by national-religious extremists, will only result in unnecessary bloodshed and violence on the Temple Mount.

Nicholas Saidel, JD, MA, is the Associate Director of the Institute for Strategic Threat Analysis & Response (ISTAR) at the University of Pennsylvania.