By Oren Persico / The 7th Eye (Translated by Sol Salbe) 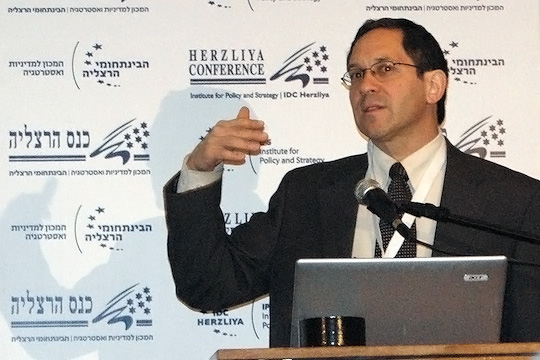 The Palestinian Authority and its leaders voiced incitement against Jews and Israel, but they are not responsible for a shooting attack that killed an Israeli. That was the ruling three weeks ago by Judge Dalia Ganot in Tel Aviv-Jaffa District Court. In her ruling, the judge gave scathing criticism of the expert witness testimony of Itamar Marcus, founder of Palestinian Media Watch, testimony which was meant to buttress the plaintiffs’ position.

About a decade ago the family of a man killed in a shooting attack, whose identity was kept confidential during the legal proceedings, filed a suit for damages against the perpetrators and against Palestinian Authority officials (including Yasser Arafat ) and the PA itself. Among other things, the plaintiffs claimed through lawyer Shoshana Glass, that the PA and its senior officials bore indirect responsibility in consequence of their policy of incitement against Jews and Israel. The defendants, represented by Attorney Yoseph Arnon, denied responsibility.

Click to read more about discredited charges of Palestinian incitement 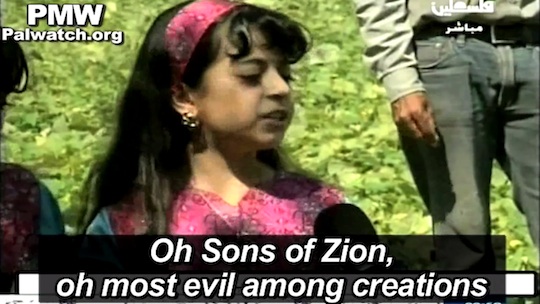 The prosecution brought in Marcus as an expert witness: his research institute follows media reports inside the PA. Marcus’s conclusion was that there is indeed a clear policy of incitement against Israel and Jews. Judge Ganot read the quotes cited by Marcus from newspaper articles and watched the video clips that he had recorded, but ruled, “they do not support the expert witness’ conclusions.”

According to the judge, Marcus provided citations from the newspapers Al-Hayat Al-Jadida, Al-Ayyam and Al-Quds, and the radio station Voice of Palestine, but “neglected to mention the existence of other media in his testimony: newspapers and television networks with large circulation in the Palestinian Authority.” The Judge emphasized, “he provided no explanation for his conduct, which diminishes the credibility and professionalism of his opinion.” Judge Ganot later noted that  “expert witness Marcus was asked about the Al-Fajr newspaper and responded by saying, ‘I am not an expert on Al-Fajr [ … ] and I wonder, what expertise is required for reading and comprehending the articles?”

She added that even though Al-Quds has the largest circulation within the Palestinian Authority’s area and Al-Hayat was the lowest circulating newspaper, most of the citations in Marcus’s expert testimony were taken from Al-Hayat. “The expert was asked why he acted in this manner, and he replied that he did so because Al-Hayat Al-Jadida, is owned by the Authority. To me as a researcher it does not matter even if not a single person reads this, I know what the positions of the Authority are because this is in fact its mouthpiece, so I don’t care that it only has 8,000 daily readers, I only care about the message that the Authority wants to convey to its people.”

“During the cross-examination expert Marcus agreed that WAFA is the official news agency linked to the PLO [ … ] and yet he did not find it necessary to include even one quote from WAFA in his expert’s testimony.”

According to Judge Ganot, “this answer is somewhat problematic, because if the purpose of this expert-witness testimony is to prove the existence of a policy of incitement, designed for the masses, it stands to reason that this policy will be reflected in the more popular newspapers, which have a higher circulation among residents of the Palestinian Authority. Therefore it follows that if the alleged messages are being brought to the attention of the handful of people who actually read Al-Quds [should probably al-Hayat ] where is the policy of incitement? Furthermore, during his cross-examination, expert Marcus agreed that WAFA is the official news agency linked to the PLO [ … ] and despite this the expert witness did not find it necessary to include even one quotation from WAFA. It would stand to reason that if there were such a policy of incitement, is would be expressed most clearly and strongly in the official media of the PLO.”

The judgment also mentioned that Marcus was questioned as to why he didn’t include any citations from the TV networks Aljazeera and al-Arabiya, which are very popular among residents of the Palestinian Authority. “As far as  Al-Arabiya TV is concerned,” writes the judge in her verdict, “he maintained that ‘we do not watch Al-Arabiya’, and in regard to Aljazeera he said that he and his team only listen to it ‘very rarely’, and again, the unavoidable conclusion that is that Marcus’s expert-witness testimony expert is skewed and in fact it is biased, especially when it became clear that on one hand it used quotations from insignificant newspapers, and on the other hand it has been established that the testimony ignored the existence of other newspapers and television networks that are very popular among the residents of the Palestinian Authority.

“Note that we are dealing with an attempt to prove a policy of incitement. It is reasonable to assume that if it is a policy, the PA leadership would make use of the most popular media – newspapers and television networks –  to get its messages across. That is so because that’s obviously the way its messages would reach the largest and broadest audience. So the conclusion is that the plaintiffs did not prove the existence of a policy of incitement, though, as I already mentioned, they have proven conclusively the existence incitement in the Palestinian media, incitement which is often, as appears from the recording tendered here, nothing but nauseating slander.”

Further down in her verdict judge Ganot highlights the fact that Marcus’s testimony was based on an examination of the media from 1995 to 2010. Marcus, the judgment states, concurred that during this period the Palestinian media published thousands of articles, but his expert testimony is based on 76 articles only. According to the ruling, Marcus was asked, “Do you believe that 76 articles cited form a representative sample that can prove that the content published or broadcast in the PA during those 15 years, especially the policy of incitement alleged, and his surprising answer was “definitely.”

” I can only wonder,” writes judge Ganot, “can the citation of 76 articles over a period of 15 years be a representative sample of the mindset prevailing in the Palestinian media during this period, and does it constitute proof of the existence of a policy of incitement? The answer is – absolutely not and this answer is further reinforced by the observation that not all of the cited articles constitute incitement; [in some] the speakers express their opinions on Israel’s ongoing political behavior.”

Judge Ganot adds that “the submission of a set of quotes in expert witness Marcus’s testimony, especially given that some are painful to read and watch, creates the impression of something very persuasive and dramatic from which to deduce the existence of a policy of incitement. But, as I mentioned, such an impression is created through the reading and uninterrupted viewing of 76 articles and several tapes, some of which are toxic and constitute obvious incitement, and some are an expressions of political views that cannot be defined as incitement under any circumstances, and most importantly, this is a  non-representative sample set of 76 articles out of tens of thousands of articles published in the period covered in the testimony, and one does not need a degree in statistics in order to conclude that 76 articles out of tens of thousands cannot indicate the existence of a policy of incitement.”

” [ … ] The fact that the expert submitted only 76 articles, not all of which, as I mentioned, are hateful, evokes a feeling of discomfort and leads to the conclusion that the expert-witness testimony is not a statistical review, but very truncated collection of data on a specific subject and the personal conclusions of the expert that are not corroborated by the testimony itself. Note: there is no doubt about the existence of a clear incitement against Israel and Jews in the Palestinian media, but the kind of proof required by the court has not been proven.”

According to Judge Ganot, “Marcus’s expert-witness testimony does not meet the definition of ‘expert-witness testimony.’ Marcus said at the opening of his testimony and when he was questioned [ … ] that he was engaged in the accumulation of material that supports the plaintiffs’ claims with respect to the existence of an incitement policy by the Palestinian media, including drawing conclusions in regarding to the existence of the alleged causal connection between the policy of incitement in question and the murder of the deceased. Accumulating and quoting of such  material does not constitute an expert-witness testimony. All the more so when no media documentation supporting the causal link between that incitement and murder has been provided, and when expert-witness Marcus does not possess the knowledge and means necessary for establishing such a causal relationship.”

“Marcus’s expert-witness testimony is very biased and very deficient. It does not cover all the mass media with a footprint in the Palestinian Authority, but only some of them, and even then it actually highlights those which are less significant in terms of their reach – the newspaper Al-Hayat Al-Jadida.  The expert-witness testimony totally ignores articles which do not support the desired conclusion, such as articles supporting a dialogue and peace. The testimony includes quotes from articles where there is no incitement, but expression of opinions, it ignores the citing of the Israeli press in Palestinian media. But most importantly and above all – it relies on a handful of items 76 articles, which do not all contain incitement, out of tens of thousands of items and articles published in the Palestinian media during the 15 years studied, and in my opinion it is not possible to establish a claim of a policy incitement on a handful of articles. Furthermore, the inferable conclusion by relying on the 76 articles submitted is that the other tens of thousands articles that were published during the examined period did not engaged in incitement.”

Because of this, and for other reasons, the judge rejected the plaintiffs’ claims . “This is not easy for me,” she noted. “Their immense suffering touched my heart, the disaster that fell upon them was terribly painful. Their account regarding the identity of the murderers of the late John Doe is not unfounded, but they did not meet the legal burdens imposed on them, and were unable to prove their case.”

This article was first published in Hebrew on media watchdog publication The 7th Eye.