Instead of bringing to court Frank Romano, who was arrested trying to block an Israeli army bulldozer in Khan al-Ahmar, Israeli police tried to deport him without notifying his lawyer or the court. Judge orders him released. 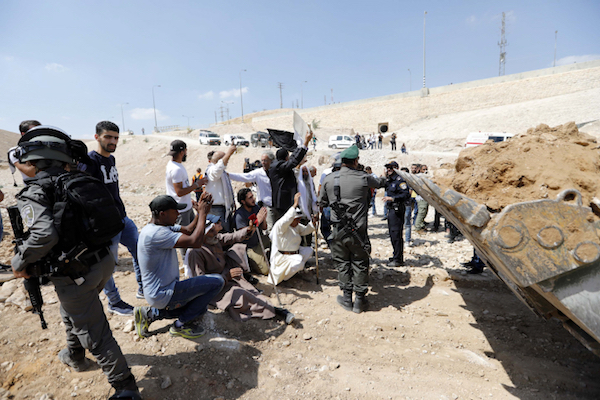 Frank Romano (standing behind the man in black jacket holding a sign), along with Palestinian activists and residents of Khan al-Ahmar, attempt to block an Israeli army bulldozer preparing to demolish the village, September 14, 2018. (Wisam Hashlamoun/FLASH90)

After taking the nearly unprecedented step of arresting a foreign national under Israeli military law, Israeli police openly defied the country’s civilian court system by simply deciding not to bring French-American professor and activist Frank Romano to his own detention hearing, instead spiriting him off to a deportation hearing without ever informing his lawyer — or the court.

After ordering police to bring Romano back to her courtroom from an airport deportation facility where he was about to be put on a plane to the United States, Jerusalem Magistrate’s Court Judge Chavi Toker rebuked Israeli police for what she called their “scandalous” behavior and ordered Roman released pending appeal.

Romano was arrested by Israeli authorities on Friday after putting his body in front of an Israeli military bulldozer preparing for the demolition and forced displacement of Khan al-Ahmar, a Palestinian village Israel plans to destroy in its entirety in the coming days. In a highly unusual step, Roman was arrested under Israeli military law instead of Israeli civilian law. 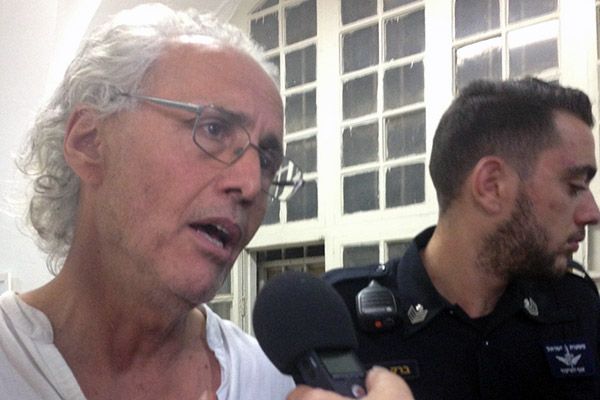 Under Israeli civilian law police must bring a suspect before a judge within 24 hours of arresting them, while under military law authorities can wait 96 hours before bringing an arrestee to court for a detention hearing. Romano’s lawyer, Gaby Lasky, had requested that his detention hearing be held in a civilian court, which was granted and scheduled for 4 p.m. on Sunday — over two days after his arrest.

Instead of bringing Romano to court at 4 p.m., however, at 2 p.m. Israeli police transferred him to the custody of immigration officials, who held a deportation hearing without informing Lasky or the court and were preparing to put him on a plane to the United States. (Romano lives in France.)

According to Lasky, the decision to book her client under military law instead of into the civilian justice system was made in order to give them time to deport him before he saw a judge, which, she alleged, was premeditated.

The judge, upon hearing what police had done, reminded the police representative that she had scheduled a detention hearing and “[I get] the impression that you want to thwart it,” adding that the police’s “behavior is scandalous on another level.”

Police continued to fight back and resisted the judge’s order to bring Romano back to Jerusalem to her courtroom, where they had originally been ordered to bring him. “Just like you brought him to the plane in two hours,” she told police, “bring him to court in two hours.”

Nearly three hours later, police finally produced Romano. The judge ordered him released on bond and to be allowed to remain in Israel until September 25th, when he was originally planning on leaving the country. Police were given until 11 p.m. to decide whether to release Romano or hold him overnight and appeal her decision by 9 a.m. Monday morning. (Update: Police did not appeal the decision and released Romano just after midnight on Monday morning.)

“In all of the years that I have worked representing Israeli, Palestinian, and international protesters, I’ve never come across a situation in which the justice system was used to justify the secret deportation of a person [accused only] of nonviolent protest,” Lasky said in the hearing.

Over 100 Palestinian, Israeli, and foreign activists have been holding nightly vigils in Khan al-Ahmar for several days now, hoping to stop the impending demolition — or at least stand in solidarity with its residents when the Israeli army bulldozers return.

The two Palestinian men who were arrested along with Romano on Friday had reportedly been released from military custody by the time of publication.