A group of 10 settlers assaults two Palestinian farmers, with IDF troops standing by. Just another day of occupation.

The media is in the habit of reporting “price tag” attacks: they’re rather easy to report. There’s often arson, and the arsonist generally leaves a clear message. It’s very photogenic and allows the common Israeli to dismiss those nutcases who use wild violence, not orderly violence like the army does, mutter something about the government being unable to deal with them, and move on.

Those who are familiar with the subject of settler violence, however, know that “price tag” is not the important story, but merely the one that’s easy to tell. The real story, which hardly leaves any traces and therefore rarely makes headlines, is that of the daily terror intended to scare Palestinians away from their land. And in this story, the line between the violence of the settlers and the actions of the body purporting to be the sovereign, the IDF, is blurry, since the settler violence cannot exist without, at least, quiet assent from the military.

Here’s a story that didn’t make the headlines. One day at the end of February, Ahmed Bassam Ahmed Uda and his cousin, Fouad Daoud Salim Shkhada, both residents of the village of Huwara, went to work on Uda’s land outside the village. They worked uninterrupted for four hours, and then, as they finished working, Uda looked up and saw, on the nearby ridge, about four Israeli civilians coming down in their direction from the settlement of Yizhar. 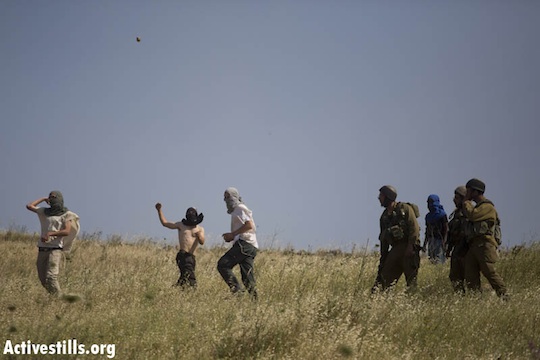 [File photo] Settlers throw stones at Palestinians as IDF soldiers stand by in the West Bank village of Asira al Qibliya. April 30, 2013 (Oren Ziv/Activestills.org)
Uda understood immediately what was about to happen, but believed everything would be fine: between him and the Israeli civilians were more than 600 meters and he intended to rev up his car and escape. But as he pushed the ignition, he was surprised to see more Israeli civilians jumping at him from a nearby ambush, stoning the car. He and Shkhada found themselves surrounded, and Uda decided to abandon the vehicle and attempt to escape by foot. He picked up his chainsaw, the most expensive item in the car, and both of them jumped out. At this point, they could count six Israeli civilians.

Uda noticed several soldiers leisurely coming down in their direction from Yizhar, and relaxed for a second. But then, another group of Israeli civilians arrived, bypassed the soldiers, and Uda and his cousin found themselves surrounded by more than ten of them. A number of Israelis attacked Shkhada, with clubs and metal bars, and he collapsed. The Israelis continued to beat Shkhada even after he fell, as he screamed in pain and tried to protect his head from their beatings. Uda tossed the chainsaw aside, collected stones, and attempted to reach his cousin and help him. At this point, he took a shattering blow to his jaw – he doesn’t know where it came from or who was responsible – and collapsed.

At this point the soldiers finally arrived. Of course, they did not shoot the Israeli civilians as they would Palestinians if the roles were reversed – the IDF Spokesman already informed reporter Carmela Menashe that IDF troops don’t shoot Jews – and neither did they use non-lethal weapons, because you don’t use gas on Jews. They asked the Israeli civilians to stop: Uda heard one of the soldiers say “enough” to his attackers, and apparently it indeed was, because the attackers left.

Shkhada had to go through several surgeries and was recently transferred to Tel Aviv’s Sourasky Medical Center for treatment. It is unclear whether his leg will recover. Uda suffered from severe pain in his jaw. The Israeli media did not report this attack. Apparently, unless there is an unusually incriminating video, an assault by Israeli civilians on Palestinians, under the aegis of the IDF, is no longer newsworthy.

The IDF troops are responsible for law enforcement in the West Bank. They are supposed to provide protection for the occupied population and its property. They were supposed to protect Uda and Shkhada. They were supposed to detain the rioters and keep them in custody until the police arrived. They did none of the above. You get the impression they got there only to make certain that the settlers didn’t go overboard – that they were there to say “enough” at the right time, so that, God forbid, the natives don’t get restless after another casualty. They did not stop the attack; they did not detain the attackers; they just made certain the violence didn’t escalate beyond a certain point. By doing so, of course, they took responsibility for it. It’s their violence now, and it’s time for the Israeli public to acknowledge that.

Worry not, however: the Israeli media will continue to make a mockery of its duties, and will let the public carry on sleeping.