For one Palestinian citizen of Israel, interrogations by the Shin Bet are a routine which include delays and harassment for no apparent reason. 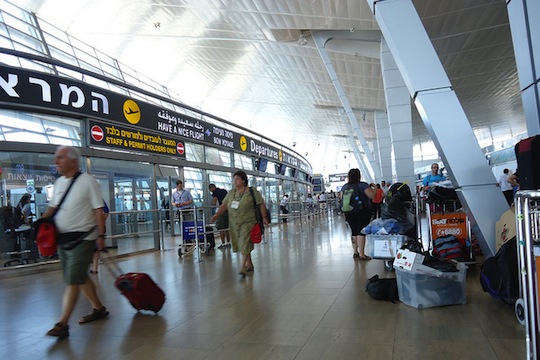 I was fortunate this week. I had a quick and easy crossing from Jordan back into Israel. No delays, no questions, no invasive body searches and no lengthy rummaging through my luggage. The border guard sitting next to the computer took my passport, opened it and looked at the screen, presumably to check for any special alert. Unlike previous occasions, she didn’t leave her seat and disappear into another room to take instructions on what to do next. She simply handed back the passport, and I walked outside to my car.

For years, on almost every occasion, I have been routinely delayed and harassed for no apparent reason upon my return to Israel, whether following a speaking engagement or a personal trip, which I do with increasing infrequency given my treatment by these officials.

A month ago I went through the humiliating routine on my return from Amman. I find it impossible to let the procedure pass without responding. Possibly, it was this previous, heated exchange that suspended, if only briefly, my expected round of humiliation this week.

On that earlier occasion, as so often before, I ended up in an argument with two “security” men from the Shin Bet. (Similar confrontations occur when I arrive at or leave from Tel Aviv’s Ben Gurion airport.) After an hour of unnecessary delays, the two asked me to put my bag on a raised bench. One of them opened it and roughly began searching the contents: some clothes and two books.

I protested angrily: “Why don’t you do that more gently?”

He answered with a feigned calm: “You must accept everything that happens here in a nice way.”

I responded: “How can I deal with racist treatment and humiliation in a nice way?”

The other man, annoyed by the comment, interrupted loudly: “Tell me, why do you hate us?”

Next, the confrontation developed into a back-and-forth of accusations, with a subtext of politics.

I answered: “Who hates whom, me or you?”

He said: “I read your writings and you hate us.”

I replied: “I hate your racism, and the humiliating way you treat me and my people.”

Angrily, he declared: “Go to the Arab countries and you will see what will happen to you there.”

This statement, regularly uttered by Israeli Jews, irritated me. He wanted to erase the differences between our situation as Palestinians in Israel and that of other “Arabs” in Arab countries as a way to justify his country’s racist polices, and to silence us. The implication of his comparison was that we are not the indigenuous people of Palestine, and that Israel is doing us a favor by “allowing” us to express our opinions and vote.

That requires ignoring Israel’s long history of political oppression. I myself was first summoned for interrogation when I was 14 years old, after I wore a T-shirt with black lettering lamenting the death of the then most popular Arab leader, Egypt’s President Gamal Abdel Nasser. The persecution continued, both against myself and my family, because we, like many others, voiced our opposition to the Israeli regime and identified with the struggle of our Palestinian people against the policy of Israelization (destroying our national identity) and Judaization (confiscating on a mass scale the lands of Palestinians who are citizens of the state).

The 1980s witnessed the harshest campaign against the secular democratic political movement I was by then a senior member of  Abnaa al-Balad, or Sons of the Village – and against me and my family. Once, in 1983, I was marched by three Shin Bet officers out of the newspaper office where I worked and beaten brutally in a police van. Later in the police headquarters, I was issued with an administrative order signed by the public security minister, banning me from entering the West Bank and the Gaza Strip.

Back to our exchange. I said: “It is you who should go to wherever you came from. You are a European colonizer, you came here as an invader.”

His face grew red with indignation. “My grandfather was born here and he didn’t come from Europe.”

“Well, if your grandfather was here before the invasion, so he must be a Palestinian like me, and like thousands of Palestinian Jews who were here all the time and lived peacefully with other Palestinians. But if he and his children participated in colonizing my country and killing my people, and continue to carry arms, then as far as I am concerned they are enemies – enemies of me, of justice and of human values.”

The other security man intervened: “Wouldn’t you treat me the same way if our roles were reversed?”

“Because I am a human being.”

Irritated, he asked: “Am I not a human being?”

He became angry: “Are you against me personally?”

I said: “No, I am not against you as a person, or as a Jew. For me, all peoples of the world are equal. But I am against you because you are racist, and you represent a colonial and racist regime which has deformed you and most of your society.”

He looked down at the bag, seemingly unsure what to do next.

I continued: “Do you know what my party is struggling for?”

“No,” he replied, dismissively.

But I insisted on explaining: “We are struggling not only to liberate the Palestinian people from the occupation and from Israel’s racist apartheid regime, but also to liberate you from the illness of racism, so you can stop inflicting harm on me and on millions of people who are the natives of this country. And then we can live together equally and peacefully.”

He shifted uncomfortably to the left and right, while the other man returned to searching my bag, thrusting his hand deep inside.

He found a booklet, and asked what it was about.

I said: “I wrote this recently to explain how I and others think the Arab Palestinians and the Israeli Jews should live together under one democratic regime in a single state. It is a humanistic and democratic alternative to your occupation, colonization and apartheid. By the way, you can take it as a present.”

He said: “No thanks. I read everything you write, and your opinions are extremist and hostile to us.”

I said: “You are not willing to listen to our viewpoint. You are racist.”

He answered: “I am not racist. I am leftist.”

I asked skeptically: “Can you tell me what you mean by left? You are Zionist left. The left, as I know it, is against racism and is identified with universal values of equality between all human beings and with social justice. The Zionist left doesn’t uphold those values.”

We both fell silent for a moment. But I started up again as he returned to searching my bag. “Look, you talk to me always in Hebrew. You don’t know Arabic. Arabic is not taught in Israeli schools, although 20 percent of the state’s citizens are Arabs. Not only that, but although you are living in the heart of the Arab world you don’t want to be a part of the region. You insist on remaining a part of the West.”

He said: “I know Arabic. I matriculated in Arabic.”

I said: “This is further evidence that you are racist and a colonizer.”

I answered: “We know that whoever wants to be employed by the Shin Bet must know Arabic well. What motivated you to learn Arabic was the need to oppress me, to know how to keep controlling me. It is not because you and your colleagues desire to know about Arab civilization, or to communicate with it or with the Arab people and to advance real coexistence.”

Finally, he stopped the search. It looked as though he had run out of things to say. I know very well the conflicted feelings of the Zionist left. Unlike the right and the far-right, who are clear in their views about the rights of the Palestinians, the Zionist left are trapped by their desire for democracy and their adherence to a Jewish state and the resulting apartheid regime.

As he allowed me to leave, he gave me a look whose meaning I could not fathom.

Awad Abdel Fattah is the secretary-general of the National Democratic Assembly party in Israel, also known as Balad, which has three elected Knesset members.