It is sad, though not surprising, that some want to open Hillel just enough to let their own excluded group in. ‘Just let J Street U in,’ they say to the gatekeepers. 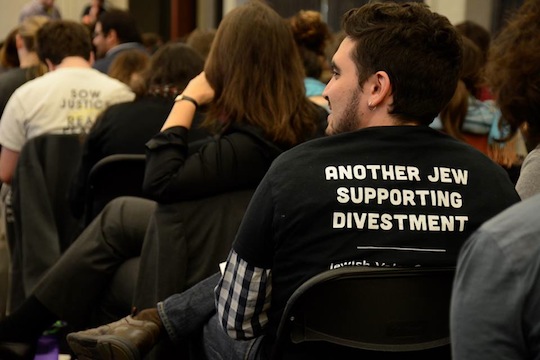 Several years ago, when Richard Joel was the president of Hillel International, the goal of Hillel was formulated as “maximizing the number of Jews doing things Jewish with other Jews.” It was the notion of “doing things Jewish” that I liked, because that could be interpreted in many ways, religiously, socially, politically, recreationally, etc. Of course, playing basketball is not just a Jewish activity, and maybe it’s not a Jewish activity at all. (Tell that to Jewish day schools…) And indeed there are many places for Jewish students to do things on campus that are not Jewish, or not with other Jews. I teach Jewish Studies, and I don’t “do Jewish” in my classroom, and I may penalize students if they “do Jewish” on their assignments. “That’s for Hillel,” I tell them. I’m not in the Jewish identity business; HIllel is.

“Doing things Jewish with Jews” casts a wide net. It can include Zionist and anti-Zionist groups provided that they frame their respective activities within the discourse of “doing Jewish”. I know many Jews that are deeply offended as Jews by the way Zionism has been implemented in the State of Israel, and needless to say, there have been many historically anti-Zionist Jewish groups. They should be welcome at HIllel not merely as individuals, but as spokespeople for ideologies that criticize and offer alternatives to Zionism and to the State of Israel. By the same token, ultra-Zionist groups, like the Zionist Freedom Alliance, should also be welcome. I believe that there should be limits; it is hard to see how a group that preached racial or religious hatred should be welcome, even if legally some of the claims may be protected speech. On the other hand, views offensive to some students should be allowed,provided that there is a willingness to be part of a community, and a common agreement to disagree. You don’t have to go a presentation by the Zionist Freedom Alliance or Jewish Voice for Peace if you don’t want to. When Meir Kahane came to my college campus, many did not go to hear him; I did.

It is sad, though not surprising, that some want to open Hillel just enough to let their own excluded group in. “Just let J Street U in,” they say to the gatekeepers, “We are part of the family; it’s those Jews who partner with the Students for Justice in Palestine — the BDS crowd that should be excluded.” A recent post by a disappointed Open Hillel-er, herself from J Street U, decries the intolerance of those on the left who ridiculed her desire to invite Elie Wiesel to the Open Hillel, and who only invited right-wing groups for strategic purposes, i.e., to show how open they are. Open Hillel is presented as a ruse to provide legitimacy for views that she considers illegitimate. But this is confusing the ideology of some members of Open Hillel with what Open Hillel wants the ideology of Hillel to be. Open Hillel is overwhelmingly a left-wing enterprise, ranging from liberal Zionist to non-Zionist and anti-Zionist. I never heard that it pretends to be representative of all voices, certainly not the voices of Closed Hillel. Rather, it wants HIllel to give the excluded groups a place at the table with the included groups.

How does one explain that the same author who called on Hillel to open its doors to BDS and anti-Zionist groups a few weeks ago now wishes to exclude them? I suppose she doesn’t like the fact that some of these groups find more in common with Students for Justice in Palestine then with J Street U. SJP is not about dialogue with liberal Zionists; it is about joint struggle with anybody who will support Palestinian rights. In some places it will not “dialogue” with liberal Zionist groups like J Street U or partner with them to bring liberal Zionist critics of the government to campus.

Hillel has no obligation to host an event sponsored by Students for Justice in Palestine, even if its president is Jewish. That’s because SJP’s mission is not a Jewish one, though obviously many of its aims can coincide with the aims of Jewish students doing things Jewish. Dialogue between Jews is a value, but it’s not the only way to do things Jewish. Once the motive is a Jewish one — and human rights or moral protest can be framed as a Jewish value — then the organization acting on that motive has a place at Hillel.