With a political process that consistently demands peace without justice, Palestinian children living in the occupied territories have been denied justice at almost every turn. 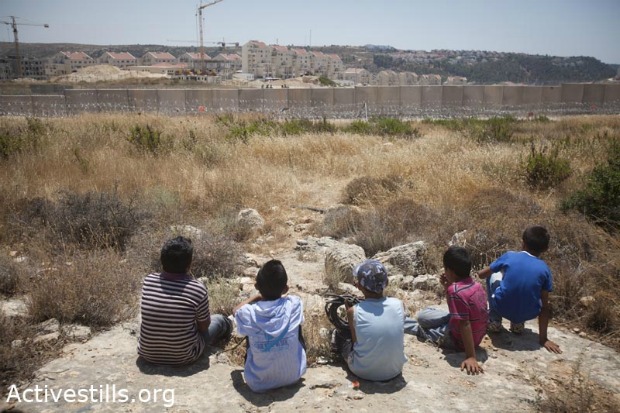 Children of Bil’in sit where the fence once stood, looking at land returned to their village and the new position of the separation wall (photo: activestills.org)

Just last week, five-year-old Wadi’a Maswadeh, a Palestinian boy from the West Bank city of Hebron, was detained for nearly two hours after reportedly throwing a stone at a passing Israeli settler car. Notwithstanding the fact that the age of criminal responsibility is 12 years old under Israeli military law, an IDF spokesperson, Eytan Buchman, stated that the seven Israeli soldiers involved in the incident acted appropriately. “It’s the kind of thing that warrants checking to make sure everything was okay,” he said.

The detention Wadi’a is not exceptional. In April, Israeli forces detained a 10-year-old boy for several hours after he was caught up in clashes near Ramallah. A month earlier, Israeli soldiers detained, blindfolded and hand tied a nine-year-old boy for nearly six hours in Hebron, and, in a separate incident, grabbed a 10-year-old boy as he played on the street with friends. In May 2013, the number of children in Israeli military detention between the ages of 12 and 15 rose to 48, the highest since March 2009.

Accountability for such abuses is nearly impossible through Israeli complaint mechanisms. Yesh Din, an Israeli organization that monitors criminal accountability of Israeli soldiers, reports that 94 percent of criminal investigations by the Israeli military against soldiers for alleged misconduct in the West Bank are closed without indictments.

Out of seven complaints filed by Defence for Children International Palestine (DCI-Palestine) in January and February on behalf of Palestinian children subjected to ill-treatment by Israeli forces, not one investigation has been opened by Israeli authorities.

While countries that respect and promote the rule of law hold the right to counsel as fundamental and essential, Palestinian children are regularly denied access to an attorney when testifying before Israeli military investigators.

This month, DCI-Palestine was informed that an investigation into the ill-treatment of Mahmoud S., 17, arrested in March 2012, had been closed due to what Israeli authorities deemed was his refusal to testify before military investigators. Mahmoud simply insisted his lawyer should be present when questioned by the same military system that abused him in the first place.

International mechanisms currently available to Palestinians have also failed to provide justice or redress for abuses, since they exist with little actual means of enforcement. While Israel has ratified all the major international human rights treaties and regularly appears before United Nations human rights treaty bodies to have its compliance reviewed, its engagement rarely results in any practical measures that end violations.

During its initial review in 2002, the Committee on the Rights of the Child, the United Nations body that monitors implementation of the Convention on the Rights of the Child, expressed serious concern regarding “allegations and complaints of inhuman or degrading practices and of torture and ill-treatment of Palestinian children” during arrest, interrogation and detention.

After more than 10 years, the only change since Israel’s initial review is that ill-treatment of Palestinian children in Israeli military detention has become widespread and systematic. In its newest report, the Committee declared that Palestinian children arrested by Israeli forces continue to be “systematically subject to degrading treatment, and often to acts of torture” and that Israel had “fully disregarded” previous recommendations to comply with international law.

With a political process that consistently demands peace without justice, Palestinians living in the occupied territories have been denied justice at almost every turn. The International Criminal Court, possibly the only institution that could provide some form of international judicial review of Israeli violations or attempt to hold individual perpetrators criminally responsible, remains, at this point, simply a remote alternative.

Israel is the only nation that automatically and systematically prosecutes children in military courts that lack basic and fundamental fair trial guarantees. With over 8,000 Palestinian children arrested, detained and prosecuted in the Israeli military court system since 2000, it is an unmistakably damaging and oppressive venture. How many young kids need to be detained, arrested and ill-treated before Israeli leaders realize that the routine ill-treatment of Palestinian kids is not okay?

Brad Parker is an attorney and international advocacy officer with Defence for Children International Palestine, an independent child-rights organization dedicated to defending and promoting the rights of children living in the occupied territories. Follow DCI-Palestine on Twitter and Facebook.

Related:
Detained: Testimonies from Palestinian children imprisoned by Israel
WATCH: IDF detains 5-year-old Palestinian in Hebron, blindfolds and handcuffs father
One child’s detention in Hebron embodies the sickness of an entire regime
Children in the crosshairs: Lessons from the al-Dura affair