The curse, which places Eitan Bronstein in the powerful club of premiers Sharon and Rabin, was issued in New York and promises the activist death by’ mysterious work accident,’ as well as being devoured by ravens and foxes.

A “Pulsa Dinura” curse was issued by a New York group against Eitan Bronstein, co-founder of “Zochrot” – an organization working for Israeli recognition of the Nakba and the right of return for Palestinian refugees.

Bronstein was informed of the curse by a letter incongruously printed in the playful Bradley Hand font and signed with a magic marker.

Authored by the “The Great ‘Pulsa Di Nura’ Committee” of 231 Street West, New York, the curse is addressed to the Zochrot conference that took place at the Eretz Yisrael Museum in Tel Aviv in September – although the letter misspells the venue as the “Haaretz Museum,” which might account for it taking some three months to arrive.

It condemns Bronstein to death “for conitnues [sic] incitement and actions against Zionism and Israel.” The spell, according to the letter, will be carried out within 30 days. A footnote explains it can take the shape of “Sudden illness, Car Accident, Mysterious Work Accident” – a perfectly explainable one doesn’t count, apparently – and, presumably by way of a bonus if you pay with credit card, “Free Fall from building.” Bronstein’s corpse will then be “devoured by Ravens and Foxes”.

Signing “for the Board” are J. Martinson and S. Epstein.

While the term “Pulsa Dinura” is mentioned once in the Talmud and once in the Zohar book – a canonical text of Kabbalah mysticism – it is used on both occasions as description of divine punishment against sinners, unsolicited by third persons. The use of the term as a curse is thought to have originated in various non-canonical texts dealing with Kabbalah “magic.” It has been frequently invoked in Israeli politics, most famously against prime ministers Yitzhak Rabin and Ariel Sharon and against MK Ahmed Tibi.

The 2010 letter informing Tibi of the curse bears some resemblance to the Bronstein one in style and manner of delivery. Unlike the Bronstein letter, it is signed by a certain Johann Rasmunsen, but considering many believe the curse will revert upon its maker if the purported victim does not succumb to it within the year, and Tibi is still alive and well, some turnover among “the board” is to be expected.

Bronstein denied plans to run for parliament or premiership in the near future. 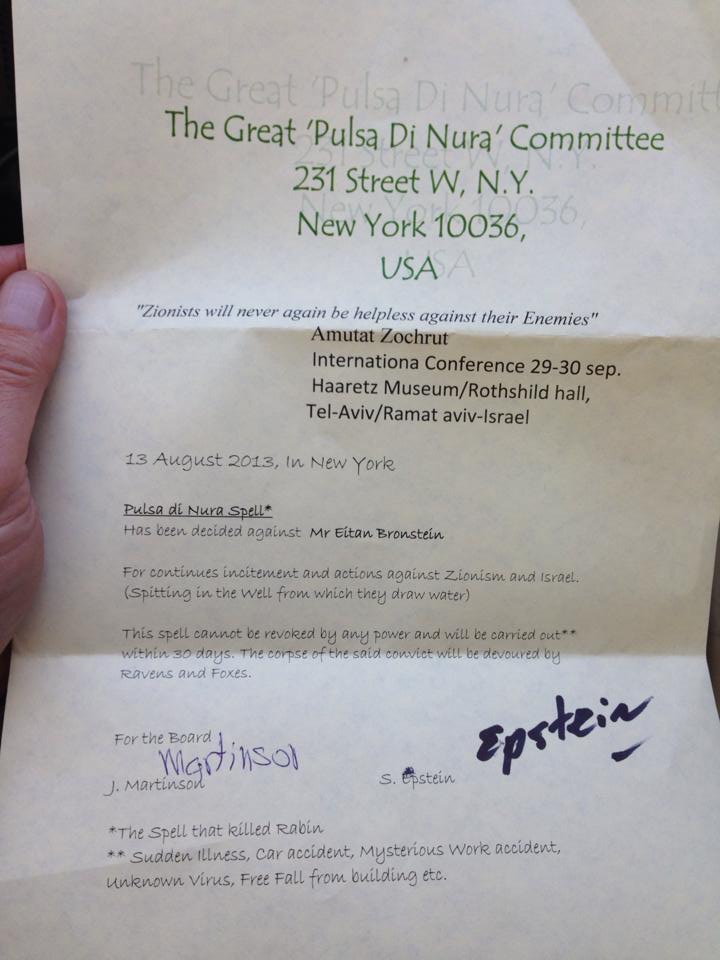