Imagine that at the peak of the Ferguson protests, President Obama — or any other American official — had issued a formal statement threatening to revoke the citizenship of African Americans who chose not to keep their mouths shut.

By Seraj Assi and Lawrence McMahon 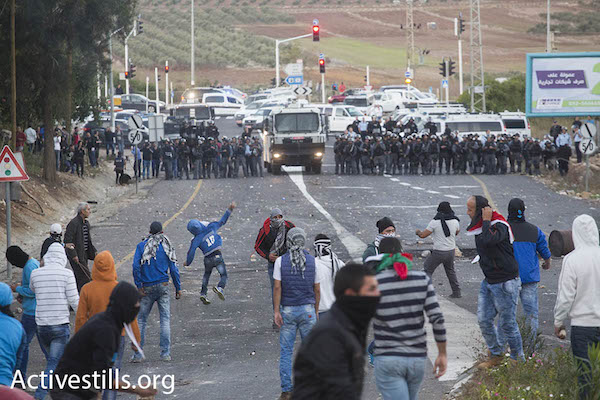 Israeli police shot dead a young Arab citizen in the town of Kafr Kanna in the lower Galilee this past week. Numerous reports have suggested that the victim, Kheir Hamdan, was shot simply because he was an Arab. Israeli Prime Minister Benjamin Netanyahu seemingly conceded the same conclusion when, prior to any investigation whatsoever into the incident, he issued a statement scolding Arab youth.

In the meantime, local journalists rushed to compare Kafr Kanna to Ferguson, Missouri, invoking the shooting of African-American teenager Michael Brown as a parallel example of a racial divide. Kafr Kanna, however, is not Ferguson, and here is why:

The conflict between the Arab minority of Israel and the State is not truly an American-style “civil rights” struggle. Arabs in Israel cannot be classified as second-class citizens when senior Israeli officials, including Foreign Minister Avigdor Liberman, continue to portray them as enemies from within, a demographic time bomb, and a fifth column population. While the Arabs in Israel experience exclusion and brutality just as African Americans do, they also face — to use a popular phrase — an existential threat.

Read also: The difference between Israel’s racist cops and America’s

The so-called Liberman Plan, named after the foreign minister, proposes transferring territory in Israel populated by Arabs to the Palestinian Authority in exchange for territory in the West Bank populated by Israeli settlers. Liberman grumbles that it makes no sense to create a Palestinian state devoid of Jews while Israel has turned into a bi-national state with over 20 percent Arabs.

In other words, the Israeli foreign minister wants an Israel completely devoid of Arabs.

This week, Netanyahu echoed the Liberman Plan. In response to the shooting and the protests it sparked, the prime minister publicly challenged Arab protestors to go and live under Palestinian rule in the West Bank and Gaza. To justify his position, he invoked what he described as their lack of loyalty to the State of Israel.

In a radical move, Netanyahu also ordered his interior minister to look into whether Israel could strip citizenship from those Arabs who dared to speak out in support of a Palestinian state. Before Netanyahu, Liberman had already proposed loyalty tests for the Arab minority, threatening to deny citizenship to those who failed. Of course, there is no chance whatsoever that similar statements would ever be directed at Jewish citizens.

Now imagine, for comparison, that at the peak of the Ferguson protests, U.S. President Barack Obama—or any other American official—had issued a formal statement threatening to revoke the citizenship of African Americans who chose not to keep their mouths shut. There are plenty of reasons why such a scenario is unimaginable. Even at moments of great racial tension in America, nobody is going to threaten the citizenship clause of the Fourteenth Amendment.

American history may be littered with both white-sponsored and black-sponsored “Back to Africa” movements, but in the year 2014, they don’t hold much sway in either the White House or Congress. In Israel, though, these are the exact sort of measures that authorities are debating, right here and right now.

Read also: Why are Palestinian citizens expected to be loyal to Israel?

This brings us to the key difference, namely Israel’s self-definition as a “Jewish democratic state.”

Naturally, and regardless of what happened in Kafr Kanna, a state cannot be both Jewish and democratic, unless by “democracy” you mean an exclusively “Jewish democracy.” Israel’s basic laws and policies are predicated on Jewish exclusiveness and privilege.

In other words, Israel is a democracy, but it is a democracy for — if not exclusively of — its majority Jewish population. It should come as no surprise, then, that many in the Arab community view their Israeli “citizenship” as a mere political fiction. And when the State of Israel kills its Arab citizens in cold blood, one is left to wonder exactly what moral mandate it has to demand their unconditional loyalty.

Seraj Assi is an Arab citizen of Israel. He is currently a PhD candidate in Arabic and Islamic Studies at Georgetown University, Washington DC. Lawrence McMahon is a historian-cum-labor union staffer living in Baltimore. He is a Ph.D. candidate in history at Georgetown taking a hiatus from his dissertation, working as editorial assistant for the flagship quarterly publication of a major U.S. labor union.

Related:
The difference between Israel’s violent, racist cops and America’s
How police lied about the deadly shooting of Khir Hamdan
PHOTOS: Protests in northern Israel after police kill Arab man
PHOTOS: Tear gas not the only thing connecting Ferguson and Palestine