Palestinians residents and activists in Bil’in who hosted the American human rights activist recently killed by Da’esh (ISIS) remember her and her commitment to their struggle. ‘We will continue, like Kayla, to work against injustice wherever it is,’ Bil’in activists say. Mueller also volunteered with African refugees in Tel Aviv.

Kidnapped by Da’esh (ISIS), American human rights activist Kayla Mueller was killed recently, allegedly in a Jordanian air strike on one of the terror organization’s bases in Syria. Before heading to Syria, Mueller was also active in the occupied Palestinian territories and Israel, largely under the auspices of the International Solidarity Movement (ISM). Her friends here in Palestine and Israel are pained, but remember her as a woman who symbolized the uncompromising struggle for justice and peace.

Mueller volunteered for the African Refugee Development Center in Tel Aviv, and for part of 2010 lived in the West Bank village of Bil’in. Bil’in’s residents have been nonviolently protesting and struggling against construction of the separation barrier through their lands for nearly a decade. She also volunteered in the East Jerusalem neighborhood of Sheikh Jarrah, where she was active in opposing the eviction and demolition of Palestinian families from their homes. 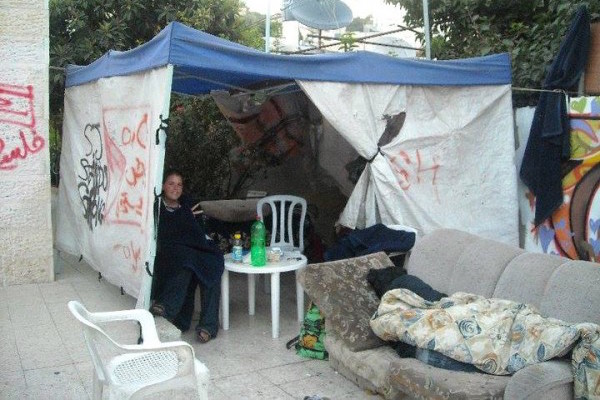 As somebody committed to human rights, Arizona-born Mueller regularly crossed borders to fight for justice. In 2014 she went to work with Syrian refugees, which is when she was kidnapped by Da’esh.

In Bil’in on Wednesday, residents reminisced about the young woman who joined them in their struggle. While protesting against the separation barrier Mueller was a guest in the home of Bassem Abu Rahmah’s family; Bassem was killed a year earlier while nonviolently protesting when an Israeli soldier fired a metal tear gas canister directly at his chest. 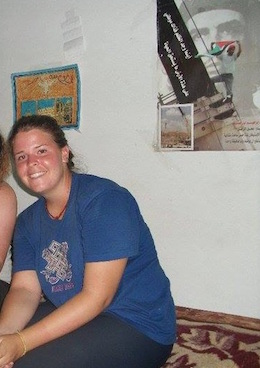 “Kayla struggled with us, stood with us in the difficult moments,” women in the village said on Wednesday. “Today, when we heard that she was killed in Syria, our hearts are in pain and we cry for her memory.”

“Kayla came to Palestine to stand in solidarity with us. She marched with us and faced the military that occupies our land side by side with us,” said Abdullah Abu Rahman, head of the Popular Committee in the Bil’in. “For this, Kayla will always live in our hearts. We send all our support to her family and will continue, like Kayla, to work against injustice wherever it is.”

On Friday February 20 the village will mark 10 years of nonviolent popular struggle against the wall and the occupation, and organizers said they will honor Kayla’s memory.

Mueller herself kept a diary and blogged, documenting her experiences in Israel/Palestine. In October 2010 she wrote:

I could tell a few stories about running desperately from what you pray are rubber-coated steel bullets launched from the gun tip of a reckless and frightened 18-year old… I could tell a few stories about sleeping in front of half demolished buildings waiting for the one night when the bulldozers come to finish them off; fearing sleep because you don’t know what could wake you.

The smell and taste of tear gas has lodged itself in the pores of my throat and the skin around my nose, mouth and eyes. It still burns when I close them. It still hangs in the air like invisible fire burning the oxygen I breathe. When I cry tears for this land, my eyes still sting. This land that is beautiful as the poetry of the mystics. This land with the people who’s hearts are more expansive than any wall that any man could ever build. Yes, the wall will fall.

Kayla Mueller didn’t hesitate to take part in a nonviolent struggle for justice and peace — anywhere. She crossed borders between states in the Middle East with hope and unshakeable faith in the nature of mankind, and constantly fought for it. She believed in justice and popular struggles for freedom and independence, with no prejudice of race, nationality or creed.

In a letter to her family from captivity in Syria a year ago, Kayla wrote: “I have a lot of fight left inside of me. I am not breaking down [and] I will not give in no matter how long it takes.”

To me, and to all those who knew her with whom I spoke, Kayla’s life and murder prove that people all over are responsible for each other, are partners — for better or for worse — and that mutual responsibility and a commitment to each other is the only way to change our global village.