Contrary to what some activists claim, Defense Minister Liberman’s decision to forbid soldiers from volunteering with children of asylum seekers is a good one. 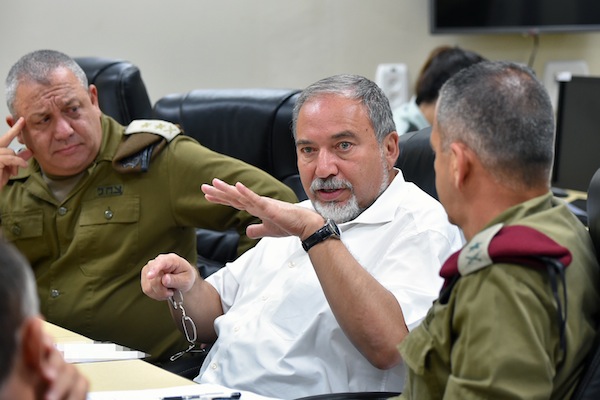 Defense Minister Avigdor Liberman (C) seen during a visit to the North Front Command on August 16, 2016. (Ariel Hermoni/Ministry of Defense)

Defense Minister Avigdor Liberman caused controversy this week when he acquiesced to requests by activists in south Tel Aviv and ordered the IDF chief of staff to stop soldiers from volunteering with asylum seeker children. The anger against Liberman was justified: volunteer work is a positive thing, especially when it is for the benefit of the weakest segments of society.

But the question that needs to be asked is how, from the get go, did we get to the point in which soldiers take an active role in education — vis-a-vis refugees or citizens — all while turning mandatory enlistment into a natural and legitimate act. In this situation, and in this context alone, it seems that Liberman actually made the right decision.

It seems that the public has come to accept the fact that men and women in uniform in different stages of their service work in education. Since the first days of the state these positions were filled by Gadna (a military program that prepares young people for service in the IDF) participants, soldier-teachers, high school programs — all state-sanctioned projects that sought to bring the army into the classroom. Those who didn’t take in the spirit of the IDF from their history books, or from the fact that they have a brother in the IDF or a father in reserve duty, will now have a teacher-soldier in the classroom on a regular basis, right before he or she becomes a soldier.

The fate of the asylum seekers and their children in Israel is slightly different. They arrived here under complex and often tragic circumstances. They are subject to difficult conditions that are only growing worse as time goes on. And not by chance — this is happening because the Israeli government has decided to make it so: to implement a policy that will tire out and leave asylum seekers without status, to prevent parents from working legally, not to mention be eligible for decent health services.

Furthermore the state does not provide solutions for young children of asylum seekers, leading to the establishment of makeshift kindergartens, where difficult conditions have led to the death of 15 toddlers. This did not happen by chance — it was the result of actual government policies. African asylum seekers rally at Levinsky Park in South Tel Aviv, on Sunday, February 2, 2014. Hundreds of asylum seekers are spending the night in the park in a protest against Israel’s refusal to grant them refugee status and the opening of ‘Holot’, the new detention facility in the country’s south. (Hadas Parush/Flash90)

Those same governments decided over the years that they would, on the one hand, make life unbearable for asylum seekers, all while wiping their conscience clean. This is what brought soldiers to volunteer with asylum seeker children in the first place — until Liberman got involved. Organizations such as Elifelet: Citizens for Refugee Children do incredible work, fighting a daily battle against a hardened, hypocritical, and racist establishment that makes the lives of these people miserable, forces them into detention, counts their calories, prevents them from working, etc.

Thus it is possible that much of the work by soldiers in these frameworks led to positive outcomes. However these children deserve an education just like every other child. Not police officers or soldiers in uniform. Not volunteering and benevolence. They deserve professional kindergarten teachers.

Cheap labor in the form of soldiers

Over the years we shave gotten used to two parallels processes taking place: the privatization of the IDF, and the enlistment of civil society. While many army units have begun enlisting civilians for full-time work, soldiers have begun taking part in civilian activities. Projects that bring together Holocaust survivors and soldiers, volunteering in centers for the elderly or mentally disabled, or volunteering with child asylum seekers. From the outside these all seem like positive developments. And yet their secondary goal carries with it a greater challenge: accepting that what the state won’t do for its citizens and residents will only be done by cheap labor in the form of soldiers.

The profits are two-fold: not only did we not spend a single shekel, we also got a civil society maintained by soldiers, where people are resigned to accept the presence of the army in every aspect of their civilian lives: when they send their child to school; when they go out to protest; or when they get lost in the supermarket, speak Arabic, and run into a group of Border Police officers who “only want to check their ID.”

The decision to allow soldiers to partake in educational activities with children is unacceptable, even if those activities are positive. The separation between civilian life and the army needs to be clear, and education should be the first to be separated from the military. It is clear that Liberman’s intentions are racist, but even a broken clock is right twice a day.

Dror Mizrahi is a member of the Meretz central committee and a resident of south Tel Aviv.