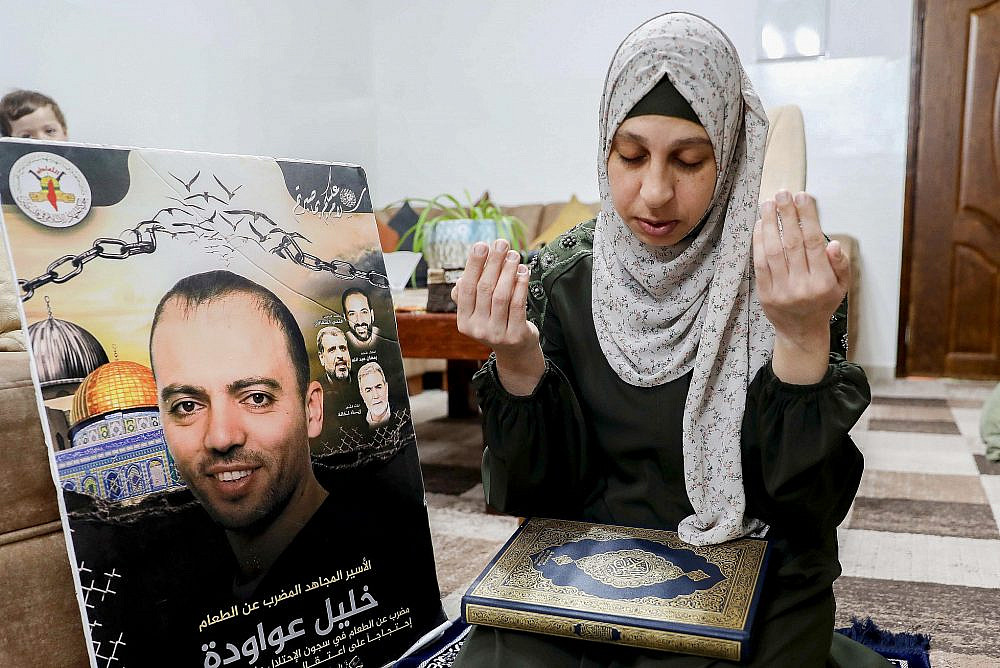 A relative of Khalil Awawdeh next to a poster bearing his face at the family home in the village of Idhna, near Hebron, occupied West Bank, August 25, 2022. (Wisam Hashlamoun/Flash90)

On Wednesday afternoon, Palestinian administrative detainee Khalil Awawdeh announced that he was ending his hunger strike, which had lasted over 170 days, after the Shin Bet agreed not to renew his detention beyond October 2. Until then, he will remain at Shamir Medical Center in central Israel, where he is currently hospitalized, in order to recover.

According to reports, Awawdeh, who is accused of being a member of Islamic Jihad, promised as a condition of his release that he would not return to “terrorist activities.” Awawdeh was first placed in administrative detention — a tool Israel uses to hold Palestinians without charge or trial — on December 27, for a period of six months, during which he began his hunger strike. The Shin Bet then extended Awawdeh’s detention for another six months, but this agreement will cut that short.

In recent days, photos of an emaciated Awawdeh on the brink of death flooded social media, energizing the global campaign to release the prisoner. If the Shin Bet’s policy of extending the detention and agreeing to release the hunger-striking detainee as his life hangs in the balance were not grotesque enough, it is worth remembering that only on Tuesday, Israel’s Supreme Court rejected another urgent petition for Awawdeh’s release.

In their brief decision, the justices of the Supreme Court recounted the chain of events that brought Awawdeh to his current condition: his administrative detention at the end of 2021, the renewal of that detention in mid-2022, his decision to start a hunger strike in March 2022, his petition to the High Court, the suspension of his administrative order due to his deteriorating health, the rejection of a petition for his release, and the submission of another petition, which the court denied earlier this week. 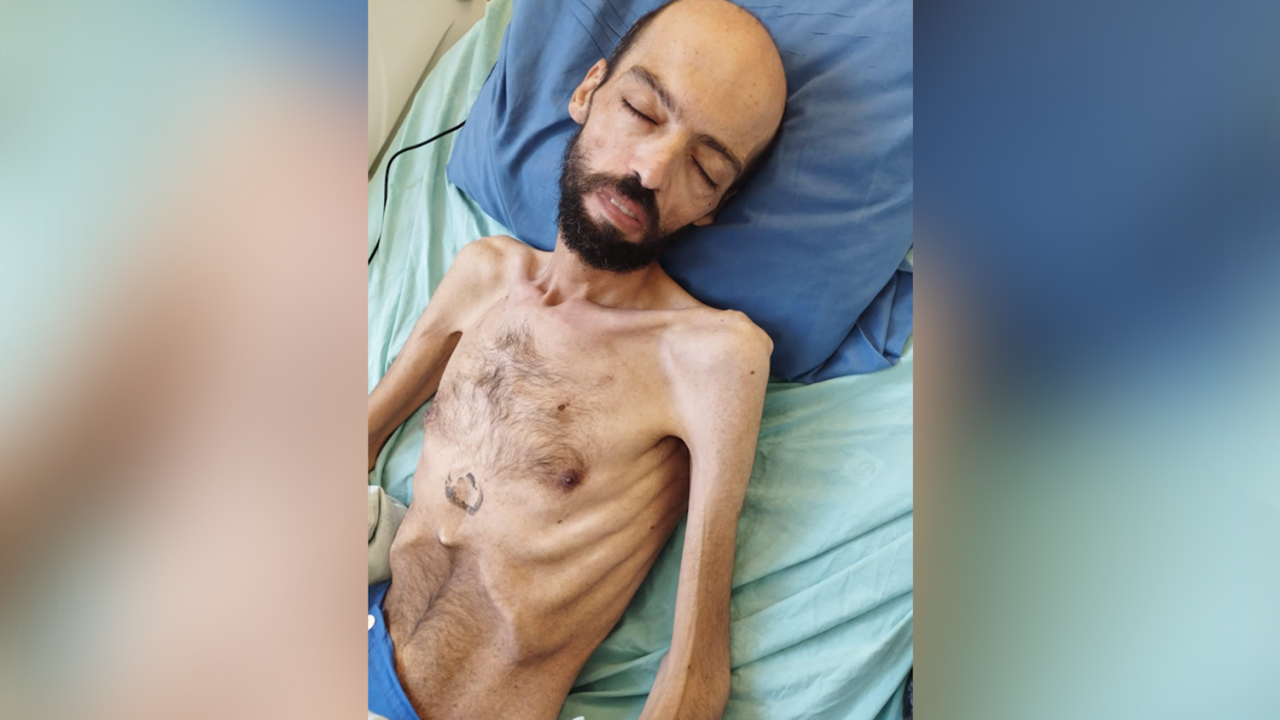 The brevity of the court’s decision is itself horrifying, as if the court were not, in fact, preparing for execution — through torture and without trial.

In the text, the Supreme Court — the official seal of approval for the crimes committed and legislated by the apartheid regime — repeatedly mentioned the “solid justification” for Awawdeh’s administrative detention, which is based on confidential materials presented to the justices by the Shin Bet. Suddenly, and quite miraculously, when the Shin Bet changed its decision just one day later, all that “solid” evidence of the danger Awawdeh poses simply vanished into thin air.

We recently got a glimpse of the nature of this so-called confidential material when Defense Minister Benny Gantz declared late last year that six of the most important Palestinian civil society organizations were now terrorist organizations. All the external parties, from the EU to the CIA, who examined the “confidential evidence” provided by Israel on the organizations, and who unlike the Israeli justice system are not beholden to the whims of the Shin Bet, have concluded that Israel’s proof is entirely baseless. Only the Israeli Supreme Court continues to bow before the power of the Shin Bet.

Meanwhile, as Palestinians and their supporters shared videos and photos of Awawdeh’s near-skeletal body, Israelis largely reacted to the images with chilling indifference.

How can one look at an image of a dying man, whose self-restraint remains his last tool in the fight against his abduction by forces of unyielding power, and not be shocked? How can one shrug with indifference in the face of a silent cry by the living dead? By a man who is being held in indefinite detention without ever being told what he is suspected of, without being charged, and without being given the opportunity to defend himself in court?

This absurd insistence on the continued incarceration of a dying man can create the impression that Israel’s very security rests on the need to keep him in custody. 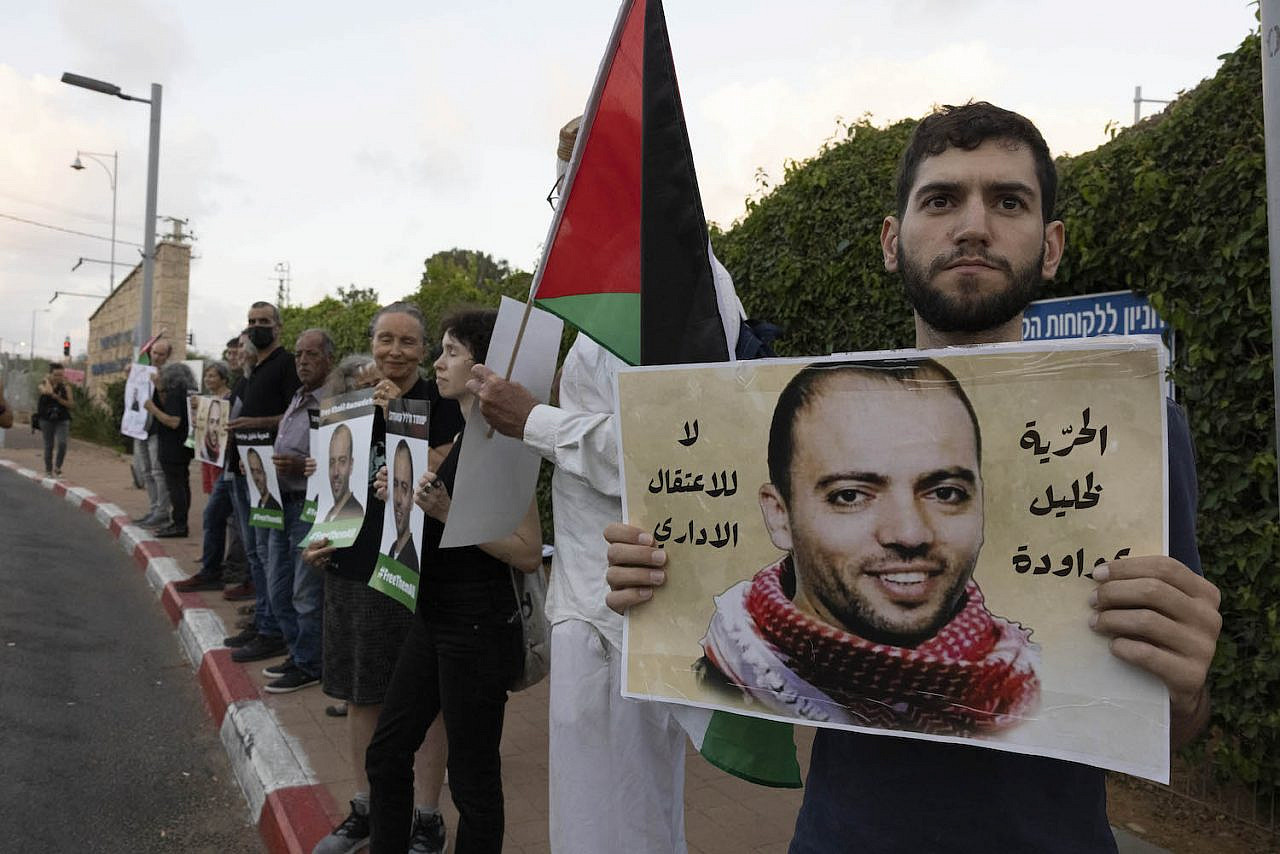 Khalil Awawdeh’s detention is the Archimedean point upon which Israel’s entire apartheid regime — whose most basic driving logic is the absolute control over the Palestinian people — is founded. This control extends to Palestinian land, freedom of movement, and life itself. This is the only way to understand the court’s cowing to the Shin Bet.

The sheer horror of the possibility that a Palestinian detainee will take his life into his own hands, even if it means certain death, is exactly the same as the horror of the possibility that this system of control could implode. The fear that the house of cards will collapse at once if, at its lowest rung, its weakest link, a disenfranchised and dying administrative detainee, will wrest control of his freedom from Israeli hands and use the one weapon he has left in his arsenal: his life.

This house of cards is held up by a constant, violent fear that the Israeli regime injects into the veins of its Jewish citizens against Palestinians — whoever and wherever they are — which in turn legitimizes the most horrible of crimes. This is precisely what the tautology that lies at the base of administrative detention serves: the very fact that we arrested them indicates how dangerous they are. Women, minors, members of the Palestinian parliament, the elderly. No one is immune. This roulette of arbitrary arrests serves Israel’s need for the existence of a double fear: ours of the Palestinians, and the Palestinians of Israel.