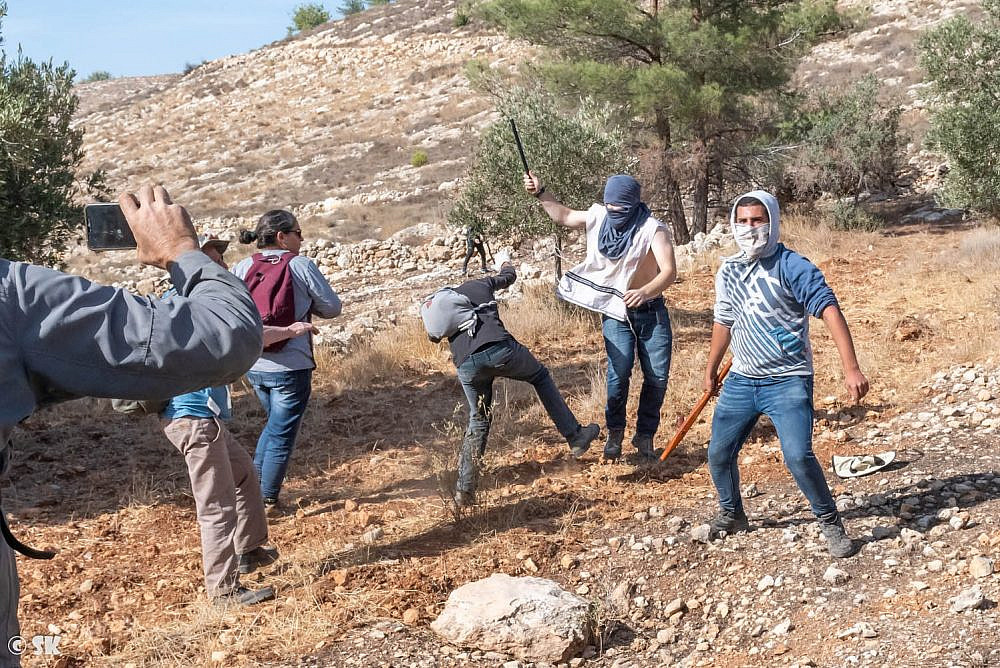 As I write these lines, three of my neighbors are at the hospital in the operating room, two of them with bullet wounds, after armed Israeli settlers attacked the southern West Bank hamlet of Khallet a-Daba’.

The incident began the morning of Nov. 10, when a group of 20 settlers began establishing a new outpost right next to the village. They built a tent and a structure for their sheep, on agricultural land belonging to Jalal Amour, one of the village’s residents.

Khallet a-Daba’ is located in the area of the South Hebron Hills known as Masafer Yatta, home to over a dozen Palestinian hamlets. In the 1980s, Israel declared the area a restricted military firing zone, and the Israeli High Court is expected to rule in the coming months whether or not the Palestinian communities will be able to remain on their land.

I was there when an officer with the Civil Administration, the arm of Israel’s military government that administers the occupied territories, arrived at the scene and told the settlers they could remain in Khallet a-Daba’. 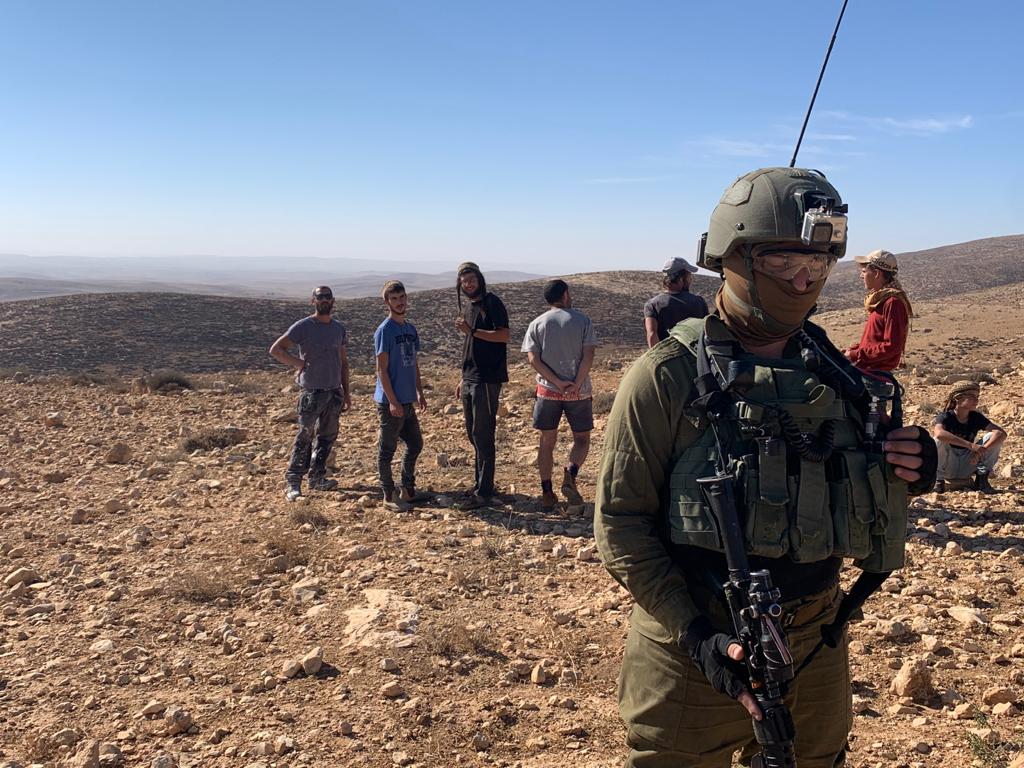 After further pressure, the army eventually asked the settlers to disassemble the structures but allowed them to stay put. Shortly afterward, the settlers began destroying a Palestinian family’s property, uprooting their olive trees, and smashing the windshields of cars.

Then, toward the evening, the army declared the area a “closed military zone.” “You have five minutes to get out of here or I’ll arrest you,” an Israeli officer told me.

The military order stated that everyone should leave the area — but in practice, the soldiers forcibly removed only the Palestinians and the activists who had shown up to support them, leaving the settlers alone. Seven Palestinian residents — all members of the Amour family — were left to face the settlers on their own in the dark of night.

“More and more settlers began to arrive in their cars,” Jalal Amour said. “They started throwing stones at us — it was scary.

“Suddenly, by surprise, they fired live ammunition. I ran away from the room where I was sitting, so as not to be killed by gunfire. I started shouting for help. Some Palestinians tried to reach the scene, but the army stopped them. From a distance, I could see fire coming from my room, and I realized the settlers had set it alight.” 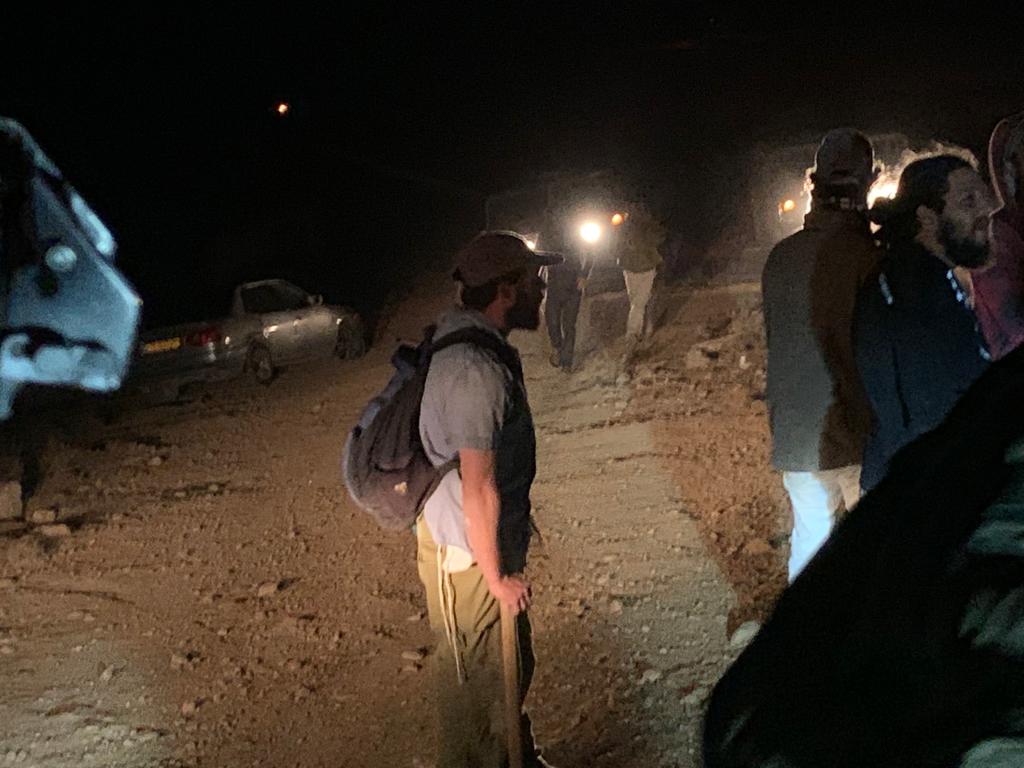 I ran back to Khallet a-Daba’ after hearing Amour’s cries for help. When I arrived, I saw him standing next to his father, 64-year-old Jamil, who was lying on the floor bleeding after settlers broke his leg with stones.

Until that moment there were no casualties, and the army was still present in the area. In the darkness of the desert, I could count dozens of settlers. They were holding rifles, batons, and slingshots. They waved their rifles from behind the soldiers’ backs, as if to scare the Palestinians.

Then, suddenly, the soldiers got into their jeeps and left — leaving behind a militia of armed settlers. With the soldiers gone, the settlers advanced in our direction.

From that moment on, everything became blurry. I heard screaming and saw young people trying to block the settlers from advancing to the village with their bodies. Then the gunshots started. It took me several seconds to even realize they were directly firing live rounds in our direction.

I hid behind Amour’s burnt room, where I saw his wounded father, Jamil, still lying on the floor. He was mumbling the words of Shahada, the prayer Muslims recite before death. 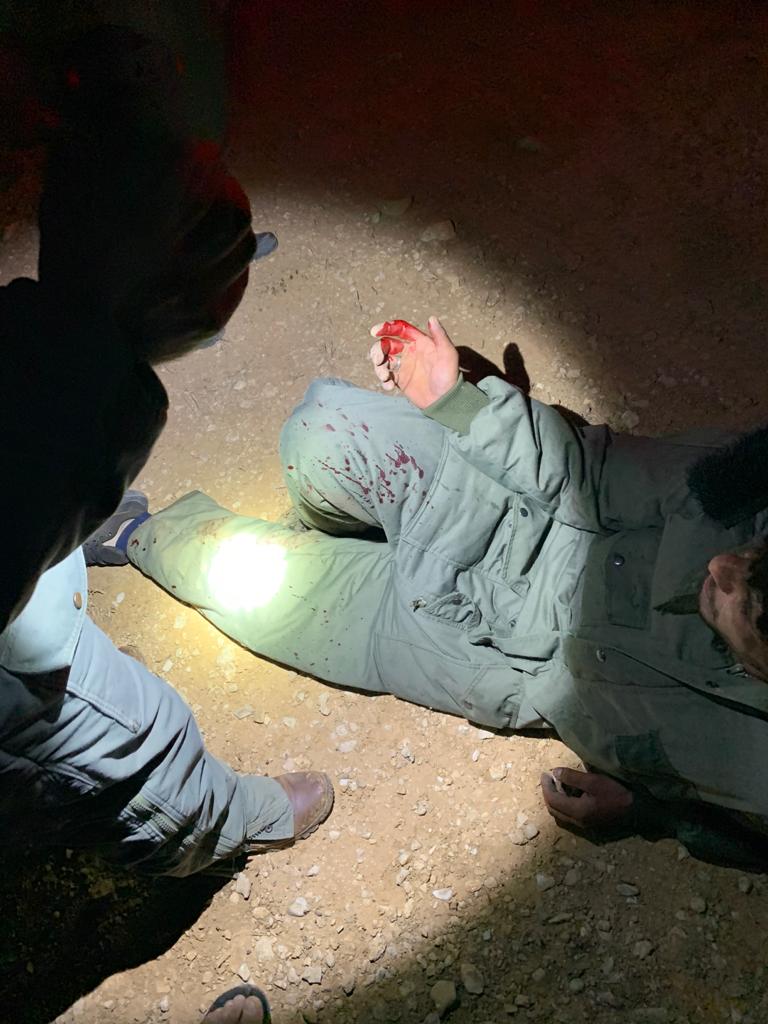 I phoned the Israeli police and demanded they come. While I was on the phone, two young men carried another wounded Palestinian, their shirts soaked in blood; the settlers had shot him in his hand. A Palestinian ambulance rushed him to the hospital.

The settlers then began opening fire in successive, intense bursts. I was sure someone would be killed. The bullets pierced the air around me and struck nearby cars. These were moments of pure horror.

On the phone, Quamar Mashraqi-Assad, a Palestinian Jerusalem-based lawyer who helps the residents of the area, told me that she was in contact with the army, who were telling her that the soldiers were at Khallet a-Daba’. But it was a lie. A minute later, another young man was hit by settler gunfire. We were completely alone.

Only after about 40 minutes of carnage did the army return to the scene. The settlers retreated and continued throwing stones, while the soldiers pushed and cursed the Palestinians.

Amour’s son was shot in the hand and is still hospitalized in stable condition. His nephew was also shot, and is in moderate to severe condition. Seven other Palestinians were lightly wounded. 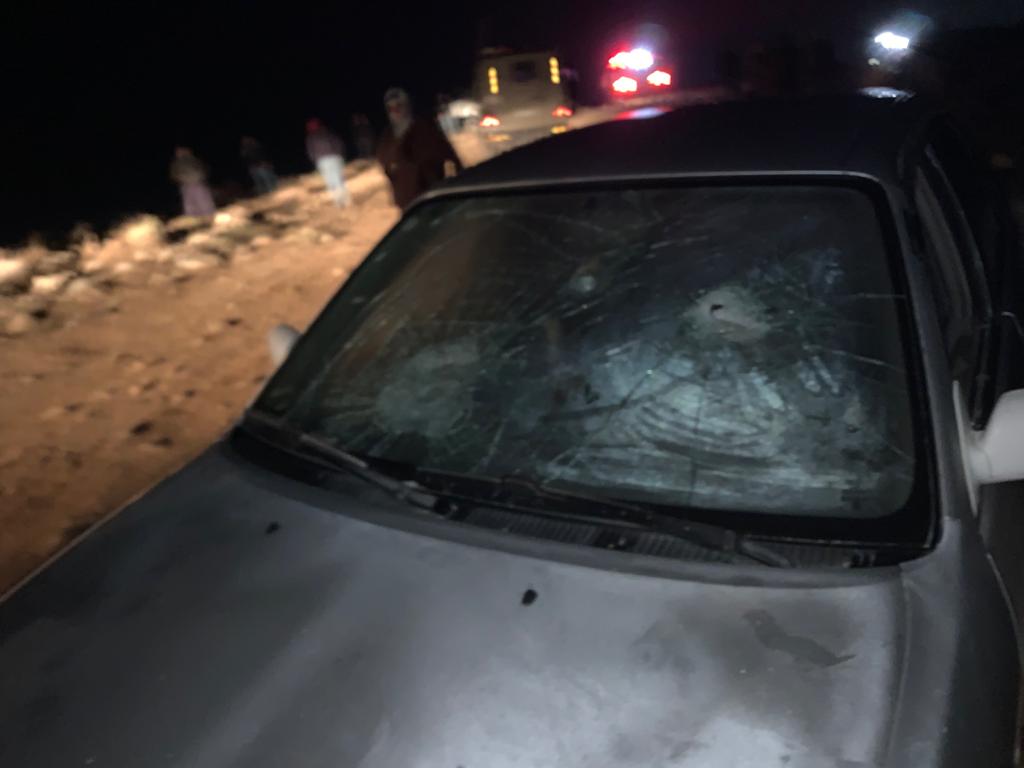 A car smashed and vandalized during an Israeli settler attack on Khallet a-Daba’ in the South Hebron Hills, West Bank, Nov. 10, 2021. (Basil al-Adraa)

In response to the news of the attack, an army spokesperson said that “the IDF had received notice of a violent confrontation between dozens of settlers and dozens of Palestinians near the settlement of Mitzpe Yair.” According to the spokesperson, the soldiers “were able to separate between the parties,” and declared the area a “closed military zone” for both settlers and Palestinians. The spokesperson then claimed that both sides left the area, until “friction arose” between them later, and soldiers came to separate between the two sides once again.

The attack on Khallet a-Daba’ is only the tip of the iceberg. Residents, activists, and human rights groups have witnessed an alarming increase in settler violence in the West Bank in recent months.

Most of these events are either not documented or filmed from a distance for safety reasons. In contrast to the settler pogrom that took place in the village of Mufagara in broad daylight in late September, this time in Khallet a-Daba’, the darkness prevented Palestinians from filming what took place.

In the South Hebron Hills, the backing these attacks receive from the army is part of a concerted effort to create a sense of friction in the run-up to the High Court’s decision on the legality of the firing zone, in order to create a “justification” for military presence in the area.

Khallet a-Daba’ was not the only community subjected to such attacks last week. On Friday, settlers who came from the direction of the radical outposts of Bat Ayin attacked Palestinian farmers and Israeli activists who were harvesting olives in the town of Surif. Photographer Shay Kendler was able to document the attack from up close. 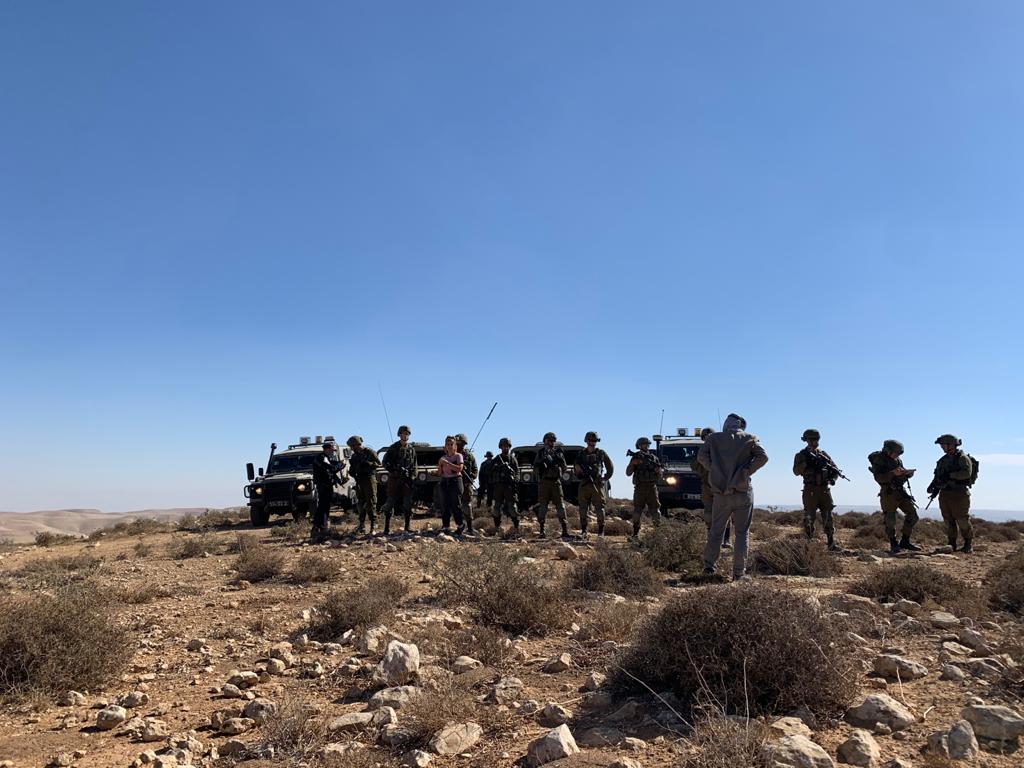 Israeli soldiers were present at the scene when the harvest began in the morning, but eventually left. Around noon, masked settlers came down to the olive groves, armed with stones and batons. The settlers wounded at least three Israeli activists, including Rabbi Arik Ascherman, a prominent left-wing activist who has been attacked by settlers before.

Activist Gil Marshall, who was wounded in his hand, said: “In the beginning of the day there were a lot of soldiers, but they left and allowed the attack to take place. We warned them half an hour before the attack, but they took their time in coming back. The settlers started throwing stones or physically attacked us with batons. One of them had a baton that looked like it belonged to Yamam [the Israeli police’s counter-terrorism unit]. They beat us for a few minutes before they withdrew. When Border Police officers began to arrive, [the settlers] fled to the outpost. The police did not pursue them.”

On Saturday, the army prevented dozens of Israeli activists from reaching the West Bank village of Susiya for hours. The activists had hoped to show their solidarity with the residents, a week after settlers invaded the village and expelled Palestinian children from the local playground. The soldiers presented the activists with an order prohibiting entry to the area. The soldiers eventually allowed activists to reach the playground, where they held activities for children.

An army spokesperson referred to the assault in Surif as “a violent confrontation” between settlers, Palestinians, and Israeli civilians. Israeli forces, said the spokesperson, in cooperation with the Israeli police, “separated the parties and dispersed the conflict.” During the operation, the spokesperson continued, the police arrested three settlers who were taken in for further investigation, without a single mention of the settlers’ unprovoked attacks.