King Bibi, as TIME Magazine recently crowned him, the fiercest Zionist to ever lead Israel, will go down in history as the one who brought Zionism to its knees 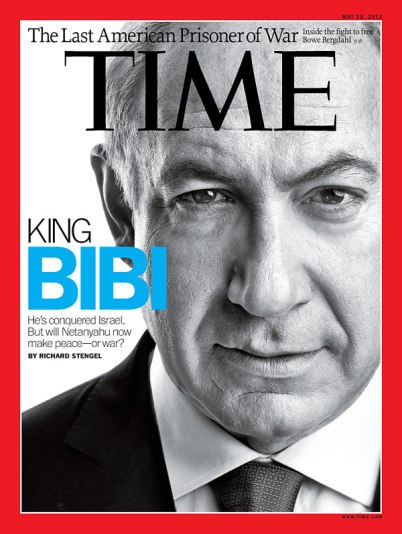 Netanyahu on the cover of TIME magazine, 2012

TIME Magazine published a lengthy item on Prime Minister Benjamin Netanyahu last month, with a close-up photo of him on the cover so huge it left just enough room for the headline: “King Bibi.” It was a Hasbara official’s wet dream. No hard-hitting questions; but rather soft, caressing queries.

As the cover said, the feature claimed to ask, yet not answer, the question of “Will Bibi make peace?” Well, for left wingers in Israel that was a pretty easy lob. In fact, with a bit more effort, TIME could have answered its own question.

But, it still would not have come to the conclusion that may be a tad unbelievable for most people when it comes to “King Bibi.” And that is that Netanyahu, head of the most right wing, most Zionist government this country has ever seen, will go down in history as the one who brought about its demise.

Since he gained power in 2009, Netanyahu has become stronger and stronger – yet does less and less to solve the Israeli-Palestinian conflict. From the Bar-Ilan speech (where he committed to a two-state solution), through the blocking of the Palestinian unilateral declaration of independence at the UN last September (where he essentially killed the two-state solution) to the latest fiasco concerning the Ulpana neighbourhood and the promise to build 850 more units in the West Bank (and it’s this decision that truly shows his colors and vision for the future).

Even with a huge coalition of 94 Knesset members, Netanyahu has shown no intention of making any progress on the diplomatic front. Instead, he wastes his time managing the huge government, which has in a way become a Knesset within the Knesset. This is where he deals with the real forces of opposition. The “opposition” of 26 seats outside Bibi’s entity, led by Labor chief Shelly Yachimovich, is of no importance. In fact, with all the battles inside his coalition, he might be wondering if joining hands with Kadima was worth it.

Stronger than ever and with no intent of changing the status quo, even the former army folks are uttering the words a majority of Israelis shudder at: a bi-national state. Kadima head Shaul Mofaz has said it [Heb], and just last week, former Shin Bet chief Yaakov Peri chimed in:

“We’re dealing with fateful issues in Israel, the peace process is deadlocked and we’re heading rapidly towards a bi-national state. This is the end of Zionism, we need new leadership.”

Peri’s right. It’s a shame, though, that we won’t get new leadership.

We won’t get one, mainly, because Israelis are comfortable with the way things are. As my colleague Noam Sheizaf points out, the status quo is what most Israelis are afraid to lose. They’ll do anything to keep it.

And that’s where Bibi comes in. The status quo king.

The settlements will keep on growing. There are now over 350,000 settlers in the West Bank – and this doesn’t include Jerusalem. Remember how moving 7,000 settlers from Gaza almost tore the country apart? That was how the right wing won: they showed everyone what the price was for evacuating a small strip of unholy land, just so you get a taste of what will happen if you decide to move them from the holiest of holies. Seriously, can anyone in their right mind imagine the IDF removing 300,000 settlers? OK, how about, 200,000? No? 100,000? To be honest, I can’t see them moving even 50,000.

It’s not going to happen.

Barack Obama won’t make it happen, either. No reason to think AIPAC will have any less a grip on the Democratic party in his second term as it did in his first term.

And if Mitt Romney wins, well, not much to say about that. Sheldon Adelson will take care of us, then.

Let’s not forget about Iran, also. If Bibi lets the jets loose, we can forget about any kind of movement on the Palestinian track for years.

This will inevitably lead to the point where the Palestinian Authority will be dismantled – either by popular Palestinian demand or some other type of self implosion. No longer will they demand a bantustan state dissected by settlers. They will demand the end to an apartheid in the one state that already exists between the Jordan and the sea.

And this my friends, as Peri put it, is the end of Zionism. It may not be the end of Jewish self-determination. That is yet to be seen. But it will be the end of this entity as we know it, and the rebirth of another, one state, that no one knows today what will look like. Jews will no longer be a majority and will have to find a way to survive, as they did in the diaspora.

It may even put the Jewish people in the Holy Land at peril.

For this, Bibi must never be forgiven. His inaction, his love of the status quo, has in essence, endangered us all. As someone whose ancestors were annihilated by Europeans, I couldn’t be more angry.

How ironic is it that of all people, it is Bibi, with all his wishes of saving the Jews from a second holocaust, has put them in danger of suffering another.