Junior MK Oren Hazan, who rose in the ranks at breathtaking speed to become the country’s deputy speaker of the Knesset, is now being accused of running a gambling operation, procuring call girls and using crystal meth.

Deputy Speaker of the Knesset Oren Hazan (Likud) was suspended from chairing parliamentary sessions Tuesday morning after a Channel 2 exposé alleged he was involved in running a gambling operation; procuring and paying for call girls for his clients; and even using crystal meth — all as recently as last summer. The suspension puts a looming question mark over the most rapid and contradictory career the Knesset has seen in years. Hazan is the son of a convicted fraudster who barely squeezed into the Knesset and went on to occupy some of its most prestigious seats, and a right-wing populist whose first bill called for compulsory teaching of Arabic in all Israeli schools in order to reduce inter-communal tensions and honor Arabic’s standing as an official state language. 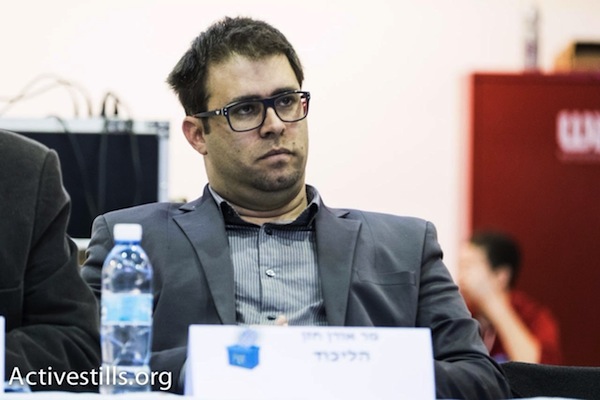 Hazan’s foray into politics came last autumn when the Likud party was gearing up for primaries ahead of the looming general elections. Told sparingly, Hazan had as good a chance as any: not only was he a young, ambitious international businessman, but he was also the son of former Likud MK, Yehiel Hazan. So far so good — except that his his most recent business experience was persistently rumored to be a casino on Bulgaria’s Black Sea coast, and his father’s most memorable moment in politics was conviction of voter fraud for leaning over to push the voting button of an absent colleague), followed by another for the obstruction of justice (for breaking into the room where the incriminating voting mechanism was stored).

A lesser (or wiser) man than Hazan Jr., when forced to measure political ambition against such  circumstances, would, conceivably, decide not to run. If he decided to run anyway, he may have considered to keep a low profile, hoping his father’s transgressions and his own less than savory business interests never arise, and working his way up the party ladder. Alternatively, someone in Hazan’s situation could go the other way: confront the problem head-on, casting himself as the enemy of vice — a gambler who has seen the light.

Hazan decided to combine the worst of both worlds. First he gave interviews denying he ever ran a casino (it was a hotel that had a casino, he said, and he didn’t run it, just helped set it up). Then, he doubled back on the allegation by releasing a primaries campaign video featuring himself and his father doing a skin-crawlingly bad imitation of the Godfather.

“This is your chance to restore dignity to the state and amend the wrongs done to me as a Knesset member… Sonny, I trust you to do the job.”

As part of his pivot to politics, Hazan courted extra notoriety by calling the Israeli veterans organization Breaking the Silence during the summer’s Gaza war and offering them a transparently false and macabre story of killing Palestinian civilians as a reserve soldier. There was no shortage of such killings during the war, but Hazan made his story so improbably grotesque that the organization decided to cross-check sources to see if his story held any water. They only discovered his identity because he used his middle name for his pseudonym, presenting himself as Asaf Hazan.

If all this sounds too cringe-worthy to actually work, it is. Hazan landed in 30th place on the Likud slate for the Knesset at a time when the party was polling steadily at 24. He just barely made it to the Knesset after Netanyahu cannibalized his right-wing allies, growing to 30 seats at the expense of Naftali Bennett’s Jewish Home party. In fact, the vote was so close that Oren told an Israeli news site that he placed bets for and against himself getting elected “so that I would win either way.”

Hazan’s second winning streak came two months later, when longtime Netanyahu ally Avigdor Liberman declared he was leaving the coalition. This left Netanyahu with a paltry 61 MKs out of 120 — still giving him a majority but sharply upping the stakes for everyone involved. The resulting coalition was left with an awkward structure: the Foreign Ministry was all but dismembered between a deputy-without-a-minister and a minister-in-charge-of-negotiations, while the Communications Ministry was absorbed into the prime minister’s office in a move that many fear will herald significant challenges to free press in the country.

But there was no more rapid an advancement than Hazan’s, who, according to several Israeli news sites, casually let it be known that unless he shares with Tzipi Hotovely the position of Deputy Foreign Minister — in effect, acting foreign minister — he might neglect showing up to important votes. While this particular position was denied to him, the compensation was abundant: the first-time MK became Deputy Speaker of the Knesset and was given seats on five committees: the Comptroller Committee, the Reform Committee, the House Committee, and the two most prestigious and powerful committees of the house: Security and Foreign Affairs, and Finance.

After several outlets reported on the young MK’s propensity for strong-arming the prime minister, Hazan released his own statement. In his version, discussions with Netanyahu were cordial and collegial, and he got the plush appointments simply because the coalition needed “someone young and hardworking” to shoulder the administrative load. Either way, the precariousness of Netanyahu’s coalition has never been as clear or as absurd.

Hazan marked his inauguration by accusing Hotovely — a stalwart of the settler wing in the Likud — of pandering to the radical left by advising Arab MKs to move to Ramallah and by presenting his first bill: a proposal to make the study of Arabic compulsory even in majority Jewish schools from first grade on. In the preamble to the bill, Hazan emphasized the status of Arabic as an official language in Israel, and observed that just as it is inconceivable for a Palestinian in Israel to graduate without speaking Hebrew, so should it be impossible for a Jew in Israel to graduate without knowing Arabic. Several coalition as well as opposition MKs signed the bill.

This rambling combination of right-wing populism, sheer chutzpah and a surprisingly constructive legislative project finally hit a snag on Monday night. Channel 2 News, Israel’s flagship news program, paid a visit to the establishment Hazan ran until last summer on Bulgaria’s Black Sea coast. According to the report, which featured clients as well as current and former employees, Hazan not only ran a casino at the resort, but also procured call girls for his clients, and was seen by them using hard drugs, including crystal meth. The report also included print-outs of emails from Hazan to other stakeholders in the casino, outlying his concerns about various administrative members and emphasizing his interest in the well-being of the operation “as a partner.”

After a pretty easy run with most of the Israeli media, Hazan now finds himself confronted with negative publicity of the worst kind. Hours after the broadcast, Hazan took to Facebook to deny Channel 2’s report, announced that he is ready to take a lie detector test and published scans of a lawsuit threat against the channel. His defenders, meanwhile, are hinting darkly that the investigation was cooked up by the Prime Minister’s Office to slap down against an upstart MK who made Netanyahu look weak. Even if leads did come from the PMO — which is in itself disturbing — it doesn’t mean that what is being said isn’t factually true. Hazan better have some seriously good lawyers and incontrovertible proof to discredit the Channel 2’s sources.

The accusations, meanwhile, are no laughing matter. Procurement of prostitution is illegal both in Bulgaria and in Israel, and few criminal offenses are as despised by as many politicians and opinion-makers as human trafficking. Consumption of crystal meth is also, obviously, illegal, although on the face of it is seems somewhat less plausible than the all-too-frequent association of a casino and an escort service. In fact, Channel 2’s only source for this is single-source hearsay. Nevertheless, MK Esawi Frej (Meretz), who had endorsed Hazan’s bill on Arabic teaching in schools, has already filed a request to lift Hazan’s parliamentary immunity, as drugs and gambling are among offenses Israelis can be brought to trial for even if they committed them abroad.

But if Netanyahu holds a grudge against Hazan, the allegations alone are enough for the prime minister to boot the junior MK out of the Foreign Affairs & Defense Committee. The implications of an alleged crystal meth addict with regular access to the most sensitive intelligence material are staggering, not least because of the risk of blackmail and bribery.

And since the role of a deputy speaker is a symbolic one, several opposition MKs are already vocally resenting being represented by a pimp. On Tuesday morning, the Speaker, Yuli Edelstein, suspended Hazan from chairing parliamentary sessions “until his name is cleared.”

Even the muscle that Hazan used to secure the slew of lush appointments has been neutralized, albeit from an unlikely quarter: Opposition leader Isaac Herzog announced, much to the chagrin of his own party, that at Speaker of the Knesset Yuli Edelstein’s request, the opposition will cancel out any vindictive vote by Hazan against the coalition, thus helping preserve Netanyahu’s fragile rule. The Labor leader seems determined that wherever Netanyahu is weak, he can be weaker.