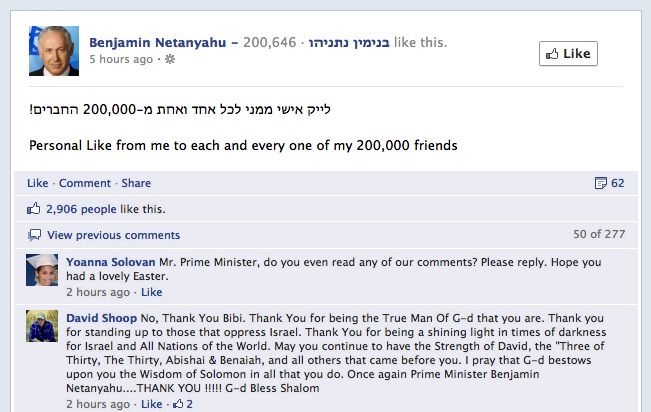 The smug announcement was further drilled home by a press release from the Prime Minister’s Office, which gushed at the prime minister surpassing the 200,000 “likes” bar, noted opponents trail “far behind” and crowned the prime minister’s Facebook page as an instrument “linking the people and the leader.” The website of Labor leader Shelly Yachimovich (with a self-confessedly humble 20,000 plus ‘”likes”) quickly shot back with the following observation from the head of its Internet volunteer teams, Amichai Saragovi:

Some time ago us in the Internet team began talking about how something in Netanyahu’s growing Facebook clout doesn’t make sense, especially in a country as small as Israel. A quick search via Facebook [through the advertisement feature – D.R.] three weeks ago found, much to our astonishment, that only 17 percent of Netanyahu’s Facebook fans are Israeli. 52 percent hail from the United States, and, most amusingly, some 3 percent, approximately 5,000 Bibi fans (more than his fans in the United Kingdom, France, Canada and Mexico combined) come from Indonesia. Indonesia, as it is commonly known, is the largest Muslim country in the world, with which we have no diplomatic relations, and I somehow find it difficult to believe the objectively joyous news that our prime minister has been capturing Indonesian hearts and minds… by comparison, some 90 percent of Shelly’s 20,400 fans are Israeli, with the remaining ten percent spread across different countries, a pattern common for such fan pages.

Saragovi then takes the gloves off and proceeds to accuse Netanyahu of deliberately misleading the public.

The leader, according to his own press release, communicates with some 200,000 of his compatriots via Facebook. In truth, he’s communicating with some 30,000 of them, not much more than the actual number of fans on Shelly’s page… there’s also the feeling the numbers have been bloated artificially.

Screenshot of the searches can be found at the bottom of Saragovi’s post. It should be noted that Netanyahu has been advertising his page relentlessly in the last few months – even if none of the “likes” on his page have been purchased, as activists were quick to suggest, the financial investment in the page is a considerable one.

The Prime Minister’s Office is yet to respond to the stats.