In an interview with the ‘New York Times,’ Yesh Atid party leader Yair Lapid rejects the idea of a settlement freeze or compromise on Jerusalem, instead offering an updated version of the Oslo Accord as an interim solution. 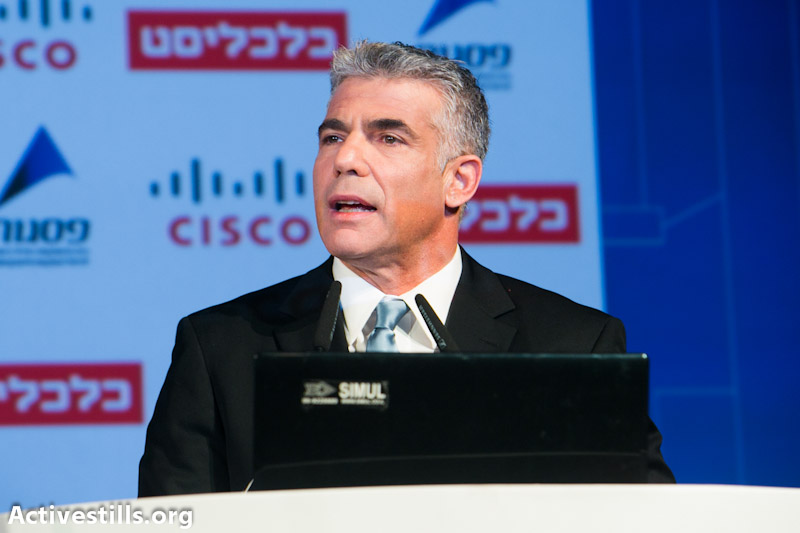 Yair Lapid, the surprising star of the last elections and Israel’s current finance minister, gave an interview to the The New York Times in which he left only “a little daylight” between himself to Prime Minister Netanyahu on the Palestinian issue, as the Times’s Jodi Rudoren put it.

That was clearly an understatement. Except for paying lip service to the need to create a Palestinian state – now a precondition for every policy speech by a mainstream Israeli leader, intended to prevent accusations of Apartheid – Lapid didn’t even try to hide his rejectionism. He told Rudoren that a final status agreement with Mahmoud Abbas is probably impossible; he said that Israel “should not change its policy on Israeli settlements in the West Bank,” and he objected to territorial compromises on Jerusalem, as he has done in the past.

When it came to talking about what should be done, rather than what shouldn’t, Lapid had the following idea:

Mr. Lapid acknowledged that tens of thousands of Jews would someday be uprooted from what he described as “remote settlements” in the West Bank, something he called “heartbreaking.” But he said that problem should be set aside for now, advocating the immediate creation of an interim Palestinian state in parts of the West Bank where no Jews live, with final borders drawn in perhaps three, four or five years.

Lapid failed to offer a catchy name for his plan. I suggest the “Oslo Accords.”

A favorite pastime among observers of Israeli politics and ‘The Conflict’ is searching for a new leader of the peace camp – someone who will finally end this foolishness with the settlements and lead the army out of the West Bank. Some thought that he or she would come from the Left, carrying with them the democratic traditions and pragmatic determination of the founding fathers. Others say it should be a centrist, or even better, a hawk-turned-dove, a general, an expansionist or a former-settler who, after decades of war, chose to live with the enemy rather than continue fighting him.

Lapid appeared to be somewhat of a hybrid – not exactly a lefty, certainly not a general, but popular enough with the Israeli mainstream. To top it off, he’s pragmatic and handsome. A new leader for a new age. In order to believe that he will end the occupation, one needs to engage in willful suspension of disbelief, to not listen to anything Lapid actually says and avoid reading his platform. But in a difficult moment, this is a small price to pay for the cause.

That illusion didn’t last very long though. After forbidding his party members from taking an educational tour of East Jerusalem, forming a political pact with the settlers, keeping intact tax breaks and other benefits for Jews who move to the West Bank, avoiding meeting any Palestinians and rejecting the notion of a final status agreement and even a settlement freeze – one needs to go very far out on a limb in order to still hold out hope that Lapid, or this government for that matter, will advance the cause of peace.

I don’t buy the new storyline about Lapid’s fall from grace. It’s no less absurd than “Lapid the peacemaker” or “Lapid the guardian of democracy.” Lapid is an excellent communicator with a good sense of the Israeli consensus and he has the rare ability to set and manipulate the national agenda. He is surrounded by powerful and experienced people and he is learning from his mistakes. Recent polls confirm that Lapid’s supporters are not leaving him just yet; Israeli politics are very forgiving, and Lapid has just begun his journey.

Still, even if Lapid’s descent is as fast as his astonishing rise was, I don’t think that we should hold our hopes for his successor. Contrary to popular belief, the problem at the heart of the occupation is not Israeli politicians or Israeli leaders: it’s the Israeli people. The public simply doesn’t want to deal with the Palestinian issue in any meaningful way. It doesn’t really matter what the Palestinians, Americans or Europeans do to appease Israel. There is an almost instinctive, little-spoken understanding that both alternatives – both one-state and two-state solution – are inferior to the status quo. Talks regarding the “unsustainability” of current trends seem very abstract. So far, the occupation seems to be the most sustainable thing this country has known.

Politicians understand this, and those who don’t lose elections (see: Livni). Lapid certainly understands. There is at least one demonstration every weekend outside his home over his new tax code and austerity measures. I don’t think he is about to see a single protester beneath his window over the NY Times interview, nor would his numbers drop.

U.S. Secretary of State John Kerry and EU High Representative Cathrine Ashton can spend countless more hours in Jerusalem and burn many more miles between capitals; the problem they are facing is not Lapid or Netanyahu – not even Lieberman – but Israeli voters. Even if talks resume, they are bound to be meaningless (that’s why the Palestinians refuse them). Israelis will consider ending the occupation only when the current trend becomes less attractive. Until then, their leaders will offer negotiations for the sake of negotiations or repackage the status quo as “an interim solution.” It’s simply what their constituents want.

Related:
Will Europe take a leading role on Israel/Palestine?
Direct negotiations: Recipe for prolonging the occupation