Instead of promoting equality and the non-racialization of citizenship in Israel, right-wing MKs are adopting a classic colonial law to weaken the non-Jewish community’s ‘threat’ to the country’s ethnic order. 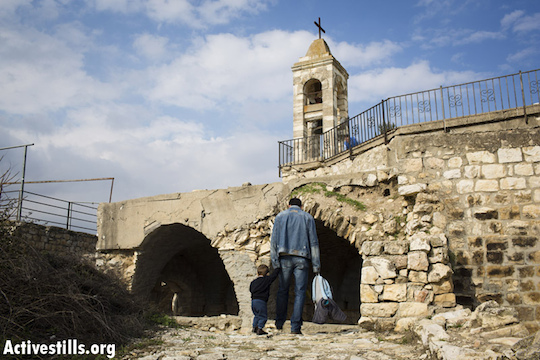 The Palestinian village of Biram, Israel, December 29, 2012. Descendants of the original residents of the Palestinian village of Biram walk through an archway of what was once the destroyed village’s church. Today, the site has been declared as a national park. Residents of the village were forced out by the Israeli army in 1949 and have not been allowed to return since, despite a 1951 High Court decision upholding their right to do so. (Photo by Oren Ziv/Activestills.org)

The Knesset this week enacted a new law that legally distinguishes between Christian and Muslim citizens of Israel regarding employment opportunities. Though the law does not make a significant impact on its own, more bills are expected to be introduced that emphasize the same distinction. The Knesset member behind the bill, Yariv Levin (Likud-Beiteinu), believes that such measures promoting the division of Palestinian citizens of Israel will allow the state to use the Christian community as “a counterweight to the Muslims that want to destroy the country from within.”

The process behind the law’s enactment typifies the absurd and anti-democratic nature of the Israeli government’s treatment of its Palestinian citizens. The law, which was written and endorsed solely by right-wing Jewish parties, was based on MK Levin’s fanciful belief that Christianity, a religious identity, has no compatibility with being Arab, an ethnic-cultural identity. Moreover, despite being an issue that directly affects them, the legislation was allowed to continue without the consent of Palestinian leaders, thinkers or the public – many of whom are Christian – to see if they even agreed to its bizarre premise.

The most striking thing about the law, however, is how blatantly colonial its aims are. It replicates a classic tactic applied by colonial rulers in Africa, the Middle East and other regions to separate local populations based on their sect, ethnicity or other identities. These differentiations were exploited to gain native allies, stir local rivalries for strategic goals, or project the state’s race-based ideology. Britain used it in Iraq, France in Algeria, Belgium in Rwanda, as did the apartheid regime in South Africa, to name a mere few.

History shows that these policies stain the affected populations with their severe political, social and economic legacies. But while we look back at these colonial agendas as a source of many of today’s conflicts and social inequalities, Israel appears to be keen on reviving them. In the face of Palestinian demands for equality and accountability for state discrimination, the government is adopting harsher measures to weaken the non-Jewish community’s “threat” to the ethnic order. Following a flood of legislative restrictions on the rights of Palestinian citizens, right-wing MKs have now moved to create separate sectarian classes to break the collective identity of the Palestinian minority.

This strategy to “divide and conquer” Palestinian citizens is not a new phenomenon in Israel, and has in fact been an active policy of the state since 1948 (read Hillel Cohen’s Good Arabs for an introduction). But this is the first time that such a concerted effort has been launched to consolidate this policy into official law. With growing incitement from high-level Israeli officials (see Foreign Minister Avigdor Lieberman’s and Economy Minister Naftali Bennett’s recent statements), Arab citizens are facing an unprecedented wave of attacks against not only their rights as citizens, but against the very fabric of their identity. Palestinian organizations have correctly condemned the “political, colonial motives” behind the law and warned that they “foreshadow the enactment of more racist bills and policies.”

It may turn out that the damage of these sectarian laws will have less to do with their effects on Palestinian citizens, who have overwhelmingly rejected them, and more to do with crippling the idea that Israeli citizenship protects Palestinians from Jewish majoritarianism. Instead of promoting equality and the non-racialization of citizenship, the state has proven that it is willing to suspend all democratic principles and processes in order to maintain its discriminatory vision for society. It is no less alarming that extremist Jewish politicians can have the arrogance, let alone the power, to decide the identity of non-Jews in the country and split them into separate legal classes. The response to this dangerous initiative is therefore not only in calling for the immediate cancellation of this most recent law, but also in condemning the Israeli political culture that enables and encourages such colonial and racist legislation in the interest of defending the “Jewish state.” Identities should be embraced under a multicultural vision of state and society; they should not be factors determining to what extent a person can have their rights.

Amjad Iraqi is an International Advocacy Coordinator at Adalah – The Legal Center for Arab Minority Rights in Israel. The opinions in this article are the author’s own and do not represent the views of Adalah.