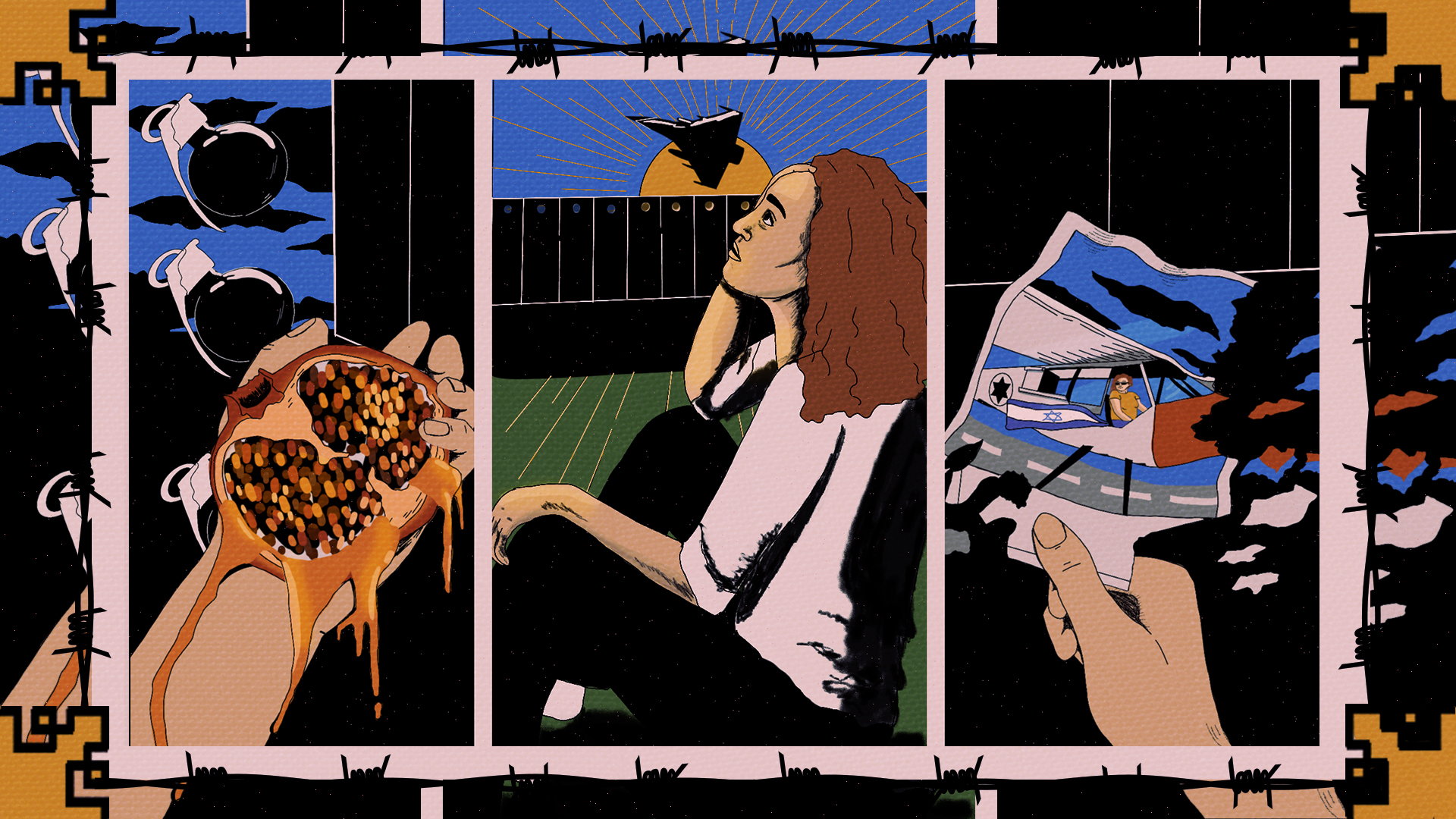 The following is an essay published as part of +972’s New Futures project. In this series, writers, thinkers, and activists share how they visualize Israel-Palestine the day after the pandemic, as a way of transforming this dystopian moment into an exercise in radical imagination of rethinking through the past, present, and future of this region, and envisioning a different reality for all those living between the river and the sea.

Every Monday morning during my childhood, boredom and disconnection, and perhaps a few eye rolls here and there, permeated the room as our Jewish day school recited the U.S. Pledge of Allegiance. Rote and familiar, I could never quite tap into the sentiment of committing my energy to this country.

And then Hatikvah, Israel’s national anthem, was sung, always next, part of the regimen. The entire tone in the gymnasium changed from dissociation to concentration, from distance to deep and focused commitment. This was our true pledge. This was where our hearts felt at home.

Like most Jews in the United States, I grew up steeped in a Zionist culture that indoctrinated us with an uncritical allegiance to Israel. Its existence was justified because of the Holocaust, the pogroms, and the real ongoing antisemitism that was taught at nearly every turn of our childhood. Even in the liberal Jewish world of the Bay Area, Zionism was the status quo — an unchallenged commitment to a project we were taught to believe was liberatory and just. In our predominantly white Ashkenazi reform community, Israel was framed as a place of inclusion and belonging, the epicenter of Jewish life and identity.

Zionism inserted itself into Jewish day school, b’nai mitzvahs, childhood fundraising drives, Jewish summer camp, post-high school plans, and holidays. As Jewish teens, we expressed a confirmation of our commitment to the Jewish people with a month-long trip to Israel, where many of us experienced the deepest joys of our high school years. We volunteered on kibbutzim, spent a week simulating the Israeli army, hung out with Bedouins in the desert, heard about the “Israeli Arabs” who lived throughout the state, fetishized the gorgeous young soldiers walking around with assault rifles, and were exposed to a highly-tailored, insider’s view of this beautiful country.

In our community, unlike many other conservative Jewish spaces, we weren’t force-fed layers of overt anti-Palestinian, Islamophobic, and anti-Arab rhetoric. But when I look back, I can hardly remember any mention of Palestinians, Muslims, or Arabs. I can remember hearing the word “Palestine” a mere two or three times during my nine-plus years of private Jewish education. Never once was the word “Nakba” uttered, the ongoing catastrophe of Palestinian displacement, land theft, death, and destruction — I had to wait until my mid-20s to even conceptualize such history.

As children, we were led to imagine that the primarily European Jews fighting in the 1948 war had battled faceless villains intent on barring them from settling in a rightful homeland, a justified inheritance in the wake of genocide. Like so many before them, these enemies were intent on destroying the Jews yet again. Never once did we imagine that perhaps the people they fought were our cousins and siblings from long ago, whose homes and villages were being stolen beneath their feet. Never once did we fathom that Palestinian Jews, Muslims, and Christians lived side by side for hundreds of years in peace as a community. Because Zionism centers European Jews over others, even Arab Jews were left out of the narratives taught to us.

I grieve that, as children, we didn’t have a choice. The adults we loved and trusted imbued us with a sense of Zionist pride, a commitment to the unquestioned defense of this nation-state, and an ingrained colonial entitlement that this land was, in fact, exclusively ours. But how can anybody create a home on top of others’ remains? On top of stolen lives, communities, and memories?

As I grew older, Zionism attached me to a larger collective, a belief that there was a space meant for me that felt like home, a community of people with whom I felt safe and seen. I wanted to marry an Israeli, and felt like my fiery, loud, opinionated personality was being validated and challenged by Israeli culture. I had finally met my people.

The two times I landed in Israel as a teenage Zionist, I kissed the ground as we were taught to do. The tarmac, hot and rough, represented a homecoming and a rebirth, steering ourselves away from the antisemitism and othering that so many Jews in the diaspora experience. I hung an Israeli flag in my dorm room during my freshman year at NYU — an emblem of where my heart and imagined future lay.

Midway through college, after transferring to UC Santa Cruz, I began to understand how systems of white supremacy, capitalism, and colonialism worked. But like many other progressive Jews around the world, I held onto Palestine as the exception. I justified Israel’s existence, all while the parallels between the settler colony of the United States and that of Israel became clearer and clearer. Eventually, I could no longer ignore the realities and truths of the Palestinian people, whose stories I had never been able to hear because we continually chose to ignore them.

Reimagining the magic of ‘hereness’

When I began to shed my Zionism — challenged by the radical Black and Brown women and folks in my community, and subsequently taught by Jewish educators in the anti-Zionist community — it was one of the deepest mourning processes I’ve ever been through. My world was disturbed, and the layers of indoctrination from childhood began to make themselves clear. Israel had been synonymous with home — to rebuke it as a Jew was to reject your culture and community. Family members told me I had gone off the deep end. I was called a self-hating Jew by my broader community on social media, and told I was supporting the annihilation of our people.

Still, people challenged me to not look away, but to dig deeper into the Palestinian narrative and experience. Similar to white people beginning to undo our whiteness, there is often a refusal to look at the brutality that undergirds our identity. I was reminded by my community that if I wanted a place in collective movements for justice, I could no longer hold onto nostalgic sentiment over humanity.

To shed an identity, to slowly break free from the harmful conditioning that systems of power inject into it, is an ongoing process of rebirth. And like any recovery, this process is continual. I love many Israeli people, still feel connected to Israeli culture, and long for the days that I spent feeling fully part of this larger community and its dreams. It felt like a tethered rooting in a world where we Jews are a minority. It gave me an identity beyond America’s white settler society, where I experienced antisemitism.

But if one’s identity is validated only through the subjugation of others, we are not part of a righteous community: we are part of a colonial project. Just like being white on these Native lands in what some call California, my identity here inherently means dispossession for Black and indigenous people. In the same way, the existence of Israel inherently means dispossession for Palestinian people.

I wonder if there are ways to still love Israeli people and culture and to divest from the larger project of settler colonialism, the same way I am able to find joy in my life here on Turtle Island. What might it mean to divest from the projects of Zionism, whiteness, and settler colonialism, while also holding pride in the layers of culture that emanate from those places? Is it even possible?

Divesting from Zionism is not about an end to Jewish wellness or existence. We regularly hear that anti-Zionism is another form of antisemitism, and that by centering Palestinian liberation, I am signing the Jews up for another Holocaust. When I hear these comments, which come from a place of fear and indoctrination, I’m reminded of the larger picture. To rewrite culture is to be human. To reimagine existence is to evolve with the times and the visions of freedom laid out to us. And so, here we are, in 2021, presented with a choice: do we want to stand for collective liberation, or do we want to remain attached to trauma and terror?

It’s time for us, as a Jewish people, to lay new foundations for what liberation — and Judaism as a whole — must look like. What might it be like for us to promote a Judaism free from Zionism, one more reminiscent of the values and cultures we held onto for centuries before committing to a project of exclusive nation building? In diaspora, we have created beauty. In diaspora, we have made meaning. And while antisemitism is one of the oldest oppressions in the world, we cannot allow our trauma and anxiety to write the script for how we navigate our safety and presence. We cannot center Jewish wholeness on the backs of indigenous people anywhere. 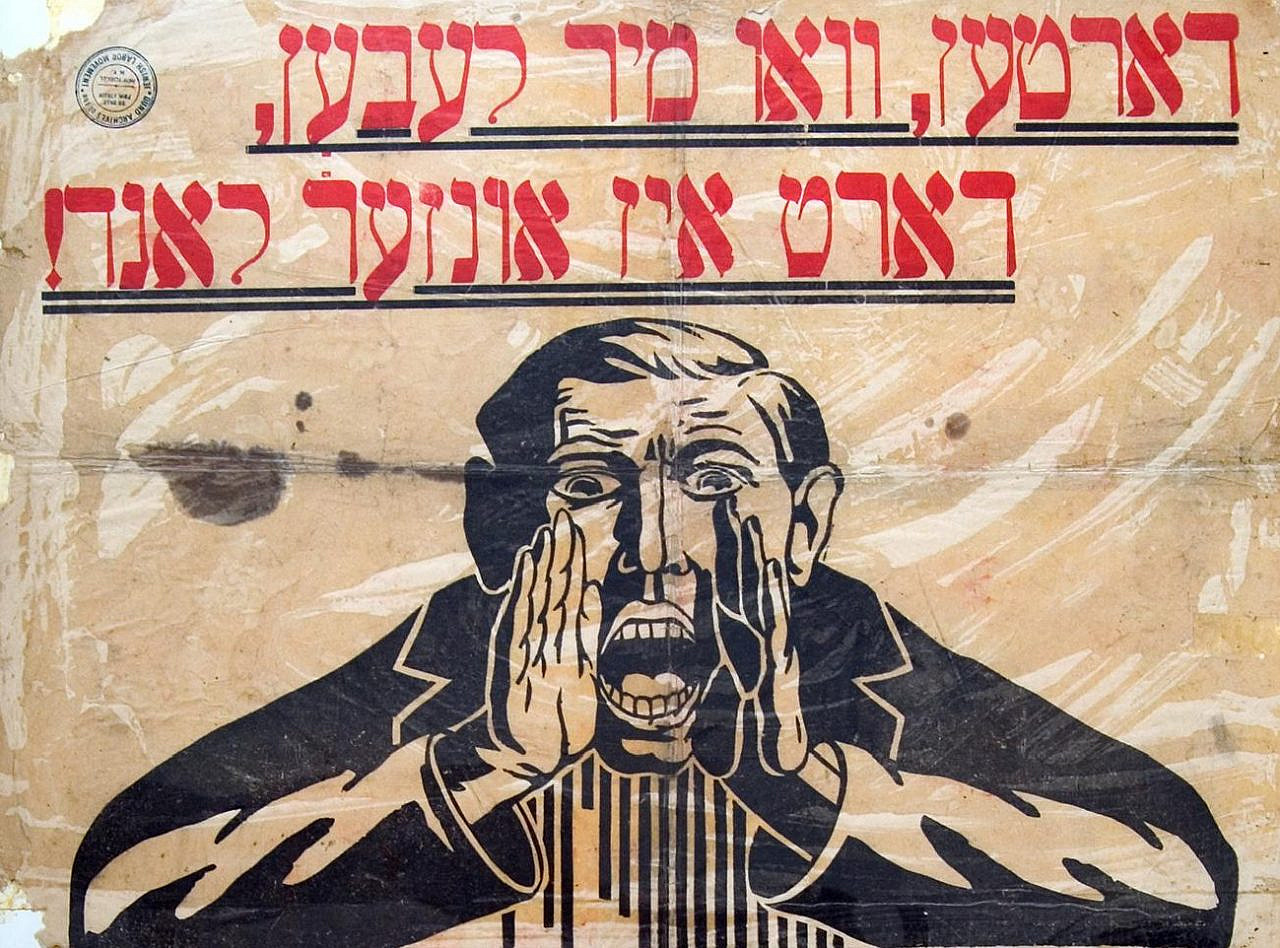 An election poster of the General Jewish Labour Bund hung in Kiev, 1917. Heading: ‘Where we live, there is our country!’ (Public domain)

In Yiddish Socialist Bundist culture — a secular political group of anti-Zionist, Marxist Jews that emerged in Eastern Europe in 1897 — there is a concept of “doikayt,” or “hereness,” which is about Jews rooting themselves with presence and meaning wherever we are. I like to imagine my Ashkenazi ancestors being members of the Bund, dedicating themselves to the presence of a Jewish civilization in Eastern Europe, as we did for over a millennia, rather than dreaming of the “thereness” of Zionism.

What if we reimagined that magic of hereness, and centered it in stability, belonging, and togetherness with our siblings of all races and backgrounds? How might it look to join with all other oppressed peoples on whichever land we’re living on, whether we are indigenous or guests on that land, to resist global systems of inequity and domination, including settler colonialism and antisemitism? What new paradigm can we invent to understand what it means to be Jewish, and where our Jewishness is welcomed?

The Jewishness I love, and which was modeled during my upbringing, is one of a people rooted in collective liberation, in justice, in hereness, and in the sacred honoring of all life. Zionism, with all its allure for many Jews, tears us away from a vision of unity across race and religion, and deters us from reconceptualizing what true safety means as a global Jewish people. We have adapted and reinvented ourselves across time and diaspora. As we imagine new futures of togetherness and healing, we can create a Judaism that is anchored in wellness for all, and choose to invest in life. Join us on this journey.

Mira Stern is a queer Ashkenazi Jew born and raised in San Francisco. She is an organizer, educator, consultant, and Jewish community builder. Learn more about her work at www.mirastern.com.