New testimonies emerge from soldiers who believe that the capture of a soldier is too strategically risky to be allowed, at any price. The real risk that the botched rescue operation was trying to avert, however, could well be more political than strategic.

There has been some controversy during the war about the meaning of the Hannibal Directive, a once-classified order meant to prevent the capture of Israeli soldiers by enemy forces – notoriously, by allowing Israeli troops to fire in their direction, even at risk of injury or death to the captive. Some have taken the interpretation of the order to the extreme, arguing that it effectively means captive soldiers were to be killed by their own army rather than allowed to be taken as bargaining chips for a future prisoner exchange. Others defended it, stating that it merely allows rescue forces greater flexibility, rather than having them paralyzed by the hostage-takers – even if this flexibility came at the cost of some risk to the hostage.

The directive, originally issued in 1986 and made public in 2003, came to the surface during the latest war because of two incidents in which soldiers (St.-Sgt. Oron Shaul, on July 20th, and Lt. Hadar Goldin, on August 1) were initially reported as captive but were quickly declared to be missing and presumed dead. In Shaul’s case, it was fairly obvious within hours of the attack on the antiquated APC in which he was traveling that the soldier was dead and that Hamas had, at best, a dead body. But when it came to Goldin, conflicting messages from the political and military leaderships of Hamas, and the apparently genuine uncertainty within the IDF resulted in an excruciating two days during which the soldier was presumed alive but in captivity. Two days in which his family and his fiancée held on to hope against all odds, only to be heartbroken all over again 30 hours later. 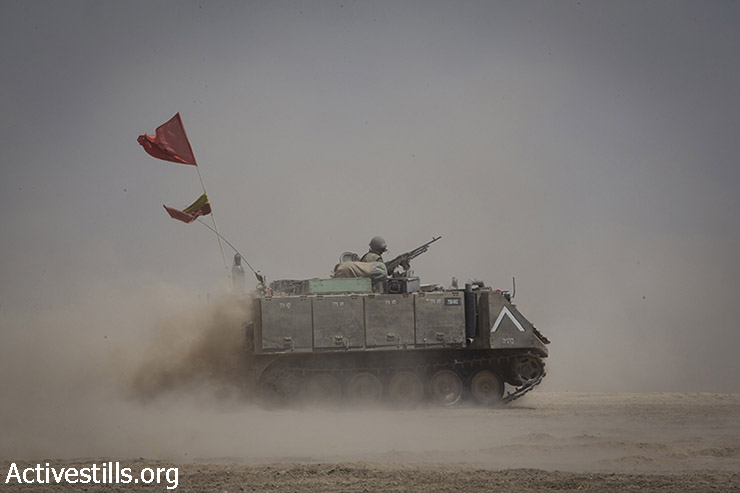 Israeli soldier is seen on board his APC near the border between Israel and the Gaza Strip, August 5, 2014, after Israel announced that all of its troops had withdrawn from Gaza. (Oren Ziv/Activestills.org)

What is alarming and what certainly contributed to that uncertainty was the IDF’s conduct in the immediate aftermath of the capture. Shooting generally at the hostage-takers would’ve been controversial enough. But according to reports from the ground, the IDF unleashed much of its immediately available firepower onto the area where it had guessed the captors and the captive could still be located. According to Israeli news site Walla!’s summary of the day’s activity, the IDF

…launched a heavy shelling of buildings in the area, bombed cars moving near the site of the incident, including rescue vehicles moving towards the  Youssef al-Najjar Hospital, brought down buildings and homes that could have concealed exits from the tunnel [where the capture occurred], and filled the tunnel up with smoke. More than 120 Palestinians were killed as a result, and it is possible that the unit that captured Goldin, as well as Goldin himself, were among the casualties.

At the very least, and apart from involving at least one potential war crime, this response showed callous disregard for the life of the captive soldier (not to mention overwhelming disregard for the lives of Palestinian civilians.)  Then, on Saturday night, came a startlingly candid statement from the first man who tried chasing the Hamas paramilitaries that captured Goldin – Lieutenant Eitan, now a reluctant candidate for military honors for valor. Eitan told Channel 2 that after first rushing into the tunnel he realized that if he continued on his own he might well end up captured himself, and went back to fetch one more soldier from his team, before going back into the dark.

I’m briefing the guy next to me. We’re moving in and I instruct him to open fire at will, without seeking permission from me… it was a possibility [that Goldin would be hurt], but we don’t hesitate. I didn’t give an order to shoot, I told him you identify [anyone] you shoot. Even if this means killing Hadar, even it means wounding Hadar – this is what you do. Painful as it is, it’s better this way.

While it’s easy enough to be shocked at the call made by the officer, on behalf of Goldin’s family, friends, fiancée, that Goldin is better off irreversibly dead than captured, it’s plain even from this interview that Eitan’s decision and subsequent rationalization of the fratricide he and his subordinate were ready to commit are products of a systemic, organizational rationale prevailing in the military. Even if this isn’t the letter of the directive, this certainly appears to be its “spirit” as interpreted by the commanding officers and accepted by the troops. “That’s what you do,” the lieutenant says in the interview. A colonel in the brigade, interviewed with his face blurred, tells the reporters: “We knew that a kidnapping event would strategically bog down the entire state, so we need to do everything to prevent it from happening.”

Most of the rapidly multiplying analyses of the directive, however, ignore the political context of this seemingly military rationale. In fact, it can be plausibly argued that the capture of an Israeli soldier does not, by any means, pose a “strategic” danger to the entire state. Israel has known countless prisoner exchanges over the years, and despite a very small percentage of released prisoners taking up arms against Israeli targets (including civilian ones), it’s difficult to seriously maintain the state’s overall security deteriorated significantly as a result. The much more significant risks of a “kidnapping scenario” are political, and they don’t endanger the entire state, but rather one person – Benjamin Netanyahu.

As I wrote on Al Jazeera America when Goldin’s ultimate fate was still unclear, prisoner exchange is currently the most contentious issue in Netanyahu’s increasingly creaky coalition. In April, Naftali Bennett’s Jewish Home party gave Kerry’s peace talks a coup de grâce when it shot down the last prisoner release agreed on in the negotiations, and went on to reap considerable populist acclaim by forcing through legislation that barred any and all release of future prisoners, making prisoner release an official wedge issue within the cabinet. 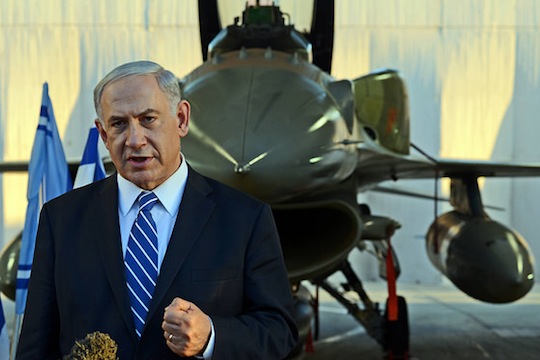 Although he might yet recover, today Netanyahu is very much a lame duck prime minister. He already suffered one stinging international defeat, when the U.S. blatantly ignored him as it moved toward a thaw with his favorite bogeyman, Iran. Then he was humiliated bitterly when he tried dividing his own party against itself just to prevent renegade party strongman Reuven Rivlin from being elected president. The last thing he needs right now is a negotiation from a position of weakness, in which the other party holds anything resembling a trump card. It doesn’t even need to be an ace: since Tzipi Livni’s days as chief negotiator for Olmert, any negotiation that’s not effectively an Israeli dictate is perceived as a shameful and dangerous display of weakness.

Negotiating with Hamas either about a prisoner exchange, or even about a ceasefire, with Goldin’s return hanging in the balance, would have been a political nightmare. Goldin’s death – even if, quite conceivably, at the hands of his would-be rescuers – has so far been accepted with equanimity, as yet another regrettable but necessary casualty of war.

I’m not implying here, by any means, that Netanyahu personally gave the order to kill Goldin. Lt. Eitan’s deployment into the tunnel, for instance, was decided on at the brigade command level; and an order as explicit as that was probably never given, by anyone. Not even implicitly. All that was needed to practically ensure the terrible result was the interpretation of the already existing directive as permission to discard the precautions needed to avoid it.

Rather, I would place a hefty portion of the blame on the overall political culture that flourished under Netanyahu – the  climate in which the Hannibal Directive changed from something hotly debated and even rejected by some commanders as illegal to something seemingly all but self-evident (“that’s what you do”). In fact, it was the current chief of staff, Benny Gantz, who reduced constraints on the directive, bringing its approval down from staff level to field level – effectively ensuring its automatic deployment in the heat of battle and dramatically raising the chances of potentially deadly results.

The recent implementation of the change – only a year ago – and its adherence to the frame of debate set down by the current ruling coalition is very much a Netanyahu effect, reflective of his monomania, contempt for compromise and the habitual conflation of hegemony with survival. It is Netanyahu’s near-allergic aversion to political risks that allowed this extreme interpretation of the directive to take root within the military. Had he been a fraction less concerned about completing his third term, or had the more moderate factions in his coalitions possessed sufficient backbone to push back against the right’s campaign to stop prisoner releases, Goldin might still well be alive. As would over 120 Palestinians in Rafah.