In a move that could strengthen the case for international investigation of alleged Israeli war crimes, B’Tselem says it will no longer share its current Gaza case files with the country’s Military Advocate General. Human rights watchdog declares that Israel is unable and unwilling to investigate alleged war crimes committed by its own soldiers. 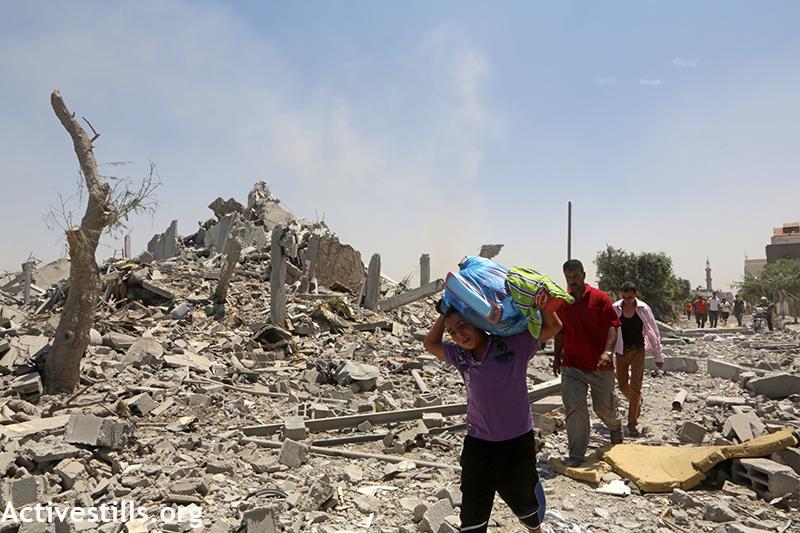 Hundreds of residents return to Khuza’a at the beginning of an August 1 ceasefire to dig out and collect bodies, and to salvage furniture, Khuza’a, east of Khan Younis, August 1, 2014. Khuza’a was cut off from the rest of the Gaza Strip and occupied by Israeli soldiers. A large number of residents were killed and injured, and many homes were destroyed. Most residents fled the Israeli attacks. 2,100 Palestinians were killed during the war, a majority of whom are believed to be civilians. (Photo: Activestills.org)

Citing “severe structural flaws” in the Israeli military’s internal investigation mechanisms and a history of dismissing criminal allegations against military personnel, leading Israeli human rights organization B’Tselem announced on Sunday that it would not comply with a military request to share details of its independent investigations into alleged Israeli abuses in Gaza.

In its investigations into crimes committed by Israeli soldiers during Cast Lead in 2009, the Israeli military partially relied on evidence and testimonies collected by B’Tselem field workers.

In a joint statement with volunteer-run human rights organization Yesh Din, B’Tselem announced that it “has decided to reject [a] request made the Military Advocate for Operation Matters Lt.-Col. Ronen Hirsch to provide the military with information regarding ‘irregular’ incidents that occurred during Operation Protective Edge.”

“Common sense has it that a body cannot investigate itself,” said B’Tselem executive director Hagai El-Ad. “Yet, again, the military will be investigating its own conduct in Operation Protective Edge; again, these investigations will not be supervised by anyone outside the military.”

The military’s investigative apparatus, according to Yesh Din figures, yielded criminal indictments in only 1.4 percent of complaints filed on behalf of or by Palestinian victims — in both Gaza and the West Bank — between 2010 and 2013. For investigations into Israel’s two previous “operations” in Gaza — Cast Lead and Pillar of Defense — the percentage of indictments is almost nil. According to B’Tselem figures, following the end of Cast Lead in 2009, only three indictments were handed down out of a total of 400 reported incidents, with the harshest sentence “given to a soldier who stole a credit card.” B’Tselem says it knows of no criminal investigations following Pillar of Defense, the 2012 air assault on Gaza which lasted nine days.

“It would be a welcome change if, instead of the existing whitewashing mechanisms, an independent apparatus were established to investigate suspected violations of international humanitarian law.”

Palestinian leaders have said they intend to sign the Rome Statute, which would give the International Criminal Court the jurisdiction to investigate and prosecute Israelis for war crimes. Although it, too, could be subject to prosecution, Hamas has said it would back the bid.

In May, a group of Palestinian and international human rights groups urged Palestinian Authority President Mahmoud Abbas to accede to the Rome Statute. The joint letter, which included signatures from Human Rights Watch and Amnesty International, said that the move “could ensure access to international justice for victims of war crimes and crimes against humanity committed on Palestinian territories, and would send an important message that such crimes cannot be committed with impunity.”

Israel has recently denied entry to Gaza for both Human Rights Watch and Amnesty International, both of which had been seeking entry to the enclave since July 8. Israel has also barred an investigative commission appointed by the UN’s Human Rights Council.

In addition to Palestine acceding to the Rome Statute, in order for the ICC to get involved it would have to determine that Israel is “unable or unwilling to genuinely carry out investigations into crimes committed by its citizens and prosecute the perpetrators.” Directly mirroring language used by the ICC itself to describe such situations, B’Tselem declared in its statement:

“Based on past experience, we can only regretfully say that Israeli law enforcement authorities are unable and unwilling to investigate allegations of breaches of international humanitarian law committed during fighting in Gaza.”

In his letter to the Military Advocate General, El-Ad noted the need for an independent inquiry into Israel’s recent conduct in Gaza: “B’Tselem’s initial investigation indicates that some 40 percent of the Palestinians killed in the operation were minors, women, and men over the age of 60,” he wrote. “In addition, thousands of homes were destroyed and hundreds of thousands of people were uprooted from their homes. This reality is, in part, the direct result of directives given to the military, some of which raise grave suspicion of unlawfulness.”

Although the joint statement stopped short of calling for an international body to assume responsibility for such investigations, both organizations said they had lost confidence in existing Israeli investigative mechanisms and called for a new, “independent” means to uncover evidence of alleged Israeli crimes.

“Should the existing whitewashing mechanism be replaced with an independent investigative body, we would gladly cooperate with it,” said B’Tselem.

For its part, Yesh Din referred to the so-called Turkel Commission, which was charged with investigating Israel’s deadly raid on the May 31, 2010 Gaza Freedom Flotilla. The Israeli commission, which included two non-Israeli experts “appointed to serve as observers and to take an active role in all of the Commission’s work,” recommended that a “civilian body” be established within the Justice Ministry to oversee the military’s legal advice. The human rights groups welcomed the Commission’s report at the time but said the test would be in its implementation.

Today’s statement said that the “failure of the Government of Israel to implement the Turkel Commission’s recommendations, more than a year and a half after their publication, only reinforces” the two organizations’ conclusion that the military’s investigative apparatus “fails to promote accountability among those responsible.”