The absurd contradiction between advancing bills with paranoid, dictator-style accusations of ‘foreign meddling,’ while throwing temper tantrums over the loss of that meddling for the sake of strengthening the occupation is deeply disheartening.

Knesset members from two right-wing parties in Knesset have revived a bill to limit foreign government funding of left-wing Israeli NGOs. The original legislation was halted by the previous Knesset following both domestic and international criticism, including from Israel’s Attorney General. The current version of the bill is being described as “softer,” version but as a fine op-ed in Haaretz by Amir Fuchs of the Israel Democracy Institute points out, it is more far-reaching and threatening to the free operation of civil society in Israel.

The bill, submitted by Ayelet Shaked of Jewish Home and Robert Ilatov of Likud-Beitenu is custom-made to target left-wing associations by specifying outright the kinds attitudes an NGO may or may not support or risk having their funding limited to NIS 20,000 from foreign government sources. The following is an unofficial translation by the Association for Civil Rights in Israel.

(a)  Calling for the prosecution of IDF soldiers in an international court;

(b) Calling for boycotts, divestment or sanctions against the State of Israel or its citizens;

(c)  Denying the existence of Israel as a Jewish and democratic state;

(e)  Supporting the armed struggle of an enemy state or a terrorist organization against the State of Israel.”

Here are a few points to consider regarding this bill:

1. Fuchs points out that the last two clauses are illegal anyway (actually, “b” is too) – so in any case, an organization advocating them would eventually to be targeted by the law. But listing the first three alongside the latter two also equates them in terms of severity and criminality; by association, the bill conveys that anyone who supports the first three is guilty of supporting terrorism. Many Israelis instinctively believe this already. Just consider how Naftali Bennett shot back at the new EU guidelines restricting funding for settlements by calling it “economic terrorism.” For his audiences, this is not a figurative statement.

2. The bill specifies that should anyone related to the NGO – a board member, employee or even regular members, which could number in the thousands – do these things, the entire organization is liable. That is a severe limitation on the rights of individuals, and it creates further legal inequality among citizens – some of whom may speak openly, while others may not

3. At a glance, the funding limitation may appear mild, an inconvenient but fair deterrent rather than a punishment. It relates only to foreign funding, and only foreign government funding which does sort of look like sovereign interference.

This is a profound mistake. In a free society, the government must not punish citizens for thinking or embracing any political opinion at all. Left-wing NGOs have the unpopular task of criticizing the government, a key pillar of democracy, and the foundation of freedom itself. The vital contribution of these groups hinges on their independence from the government, and so they depend on non-Israeli funding. Civil society here is already squeezed by the global financial crisis, which affects donations. This bill could become the cause of death for a struggling NGO, which is precisely what those MKs desire.

4. The bill was spawned in an unholy alliance with Im Tirzu, whose research and data provided the fodder for finding the best way to rip out the economic carpet from under civil society. Let’s be clear about the extent of the danger post by Im Tirzu to Israel. I can have a conversation or a dialogue with anyone on the right, no matter how much we disagree. But you cannot have a dialogue with people who rob your right to speak.

5. Hand-tailoring the bill to restrict funding from foreign political bodies is a red herring to distract attention from the millions that are poured into settlement projects by private foreign sources. Joseph Gutnick and John Hagee, Irving Moskovitz and Sheldon Adelson have reshaped the Israeli-Palestinian conflict and potential for solutions beyond recognition; the hypocrisy of tailoring bills against foreign influence on left-wing causes is mind-boggling. It makes one wonder if being right wing is a license to insult citizens’ intelligence.

Addendum: following the EU’s announcement of regulations designed to curtail agreements and financial investments in the occupied territories, the hypocrisy of some Israeli leaders reached new and screaming heights. Bennett, the head of the party proposing the NGO bill went into attack mode, so crushed was he at the thought of losing this sovereignty-violating lifeline. The prime minister and other far-right MKs were practically shaking with anger, unable to restrain themselves from the most bitter outbursts shamefully using Holocaust imagery. Really? So it turns out that foreign government funding is no longer meddling, as long as Israel can gorge on it to strengthen settlements?

The absurd contradiction between advancing bills with paranoid, dictator-style accusations of “foreign meddling,” while throwing blubbering temper tantrums over the loss of that meddling for the sake of strengthening the occupation is deeply disheartening. Even from politicians I don’t agree with, I truly expect better. 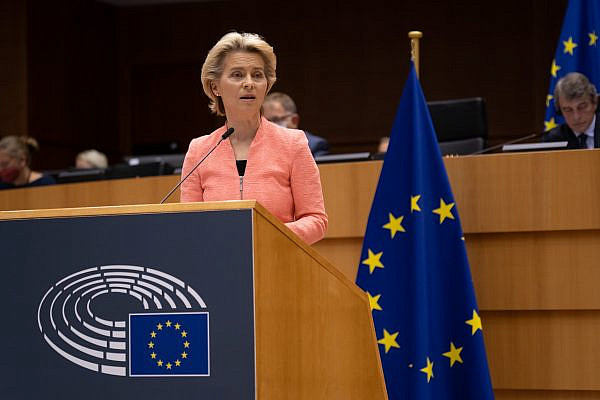 Why is the EU helping to label Israel criticism as antisemitism?
By adopting the IHRA definition, the EU is playing into the agendas of Israel advocacy groups that undermine civil society work against the occupation.
By Ilan Baruch April 19, 2021