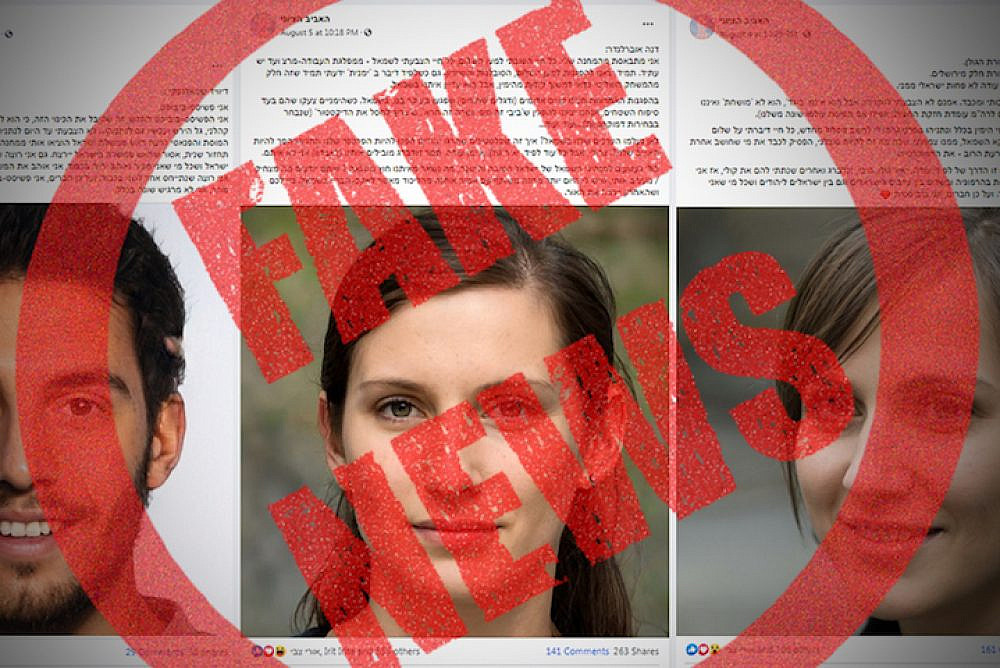 A composite image showing fake testimonies in support of Benjamin Netanyahu, posted on Facebook. (Courtesy of The Seventh Eye

Sharon Epstein used to be a left winger. She believed in peace and giving back the occupied territories to the Palestinians. But then the anti-Netanyahu protests began and something changed. Fed up with the alleged incitement against the prime minister, Sharon Epstein became, in her own words, a “Bibi-ist” — a supporter of Benjamin Netanyahu.

Epstein, whose Facebook profile picture showed a young woman with brown hair and blue eyes, shared her transition from leftist to Netanyahu supporter on a Facebook page called “Zionist Spring.” Except that the story was missing one crucial detail: Sharon Epstein does not exist. Rather, she was a fictional character created as part of a political campaign.

There are several Sharon Epsteins in Israel, but none of them are the “Sharon Epstein” who shared a story of political transformation on Facebook. The profile picture used was generated by computer software using technology known as “human image synthesis” — which processes photos of real people to create a composite image of someone who doesn’t exist, but which is deceptively realistic.

This technique, which helps manufacturers of fake news add credibility to their stories, has become increasingly popular in recent years, and is part of the world of high-tech fabrication whose products are known as “deepfakes.” Recently, a string of stories in right-wing media outlets, purportedly written by geopolitical experts opining on subjects ranging from Iran’s malign regional influence to Dubai’s stability, was found to have been the work of such made-up people — with accompanying fake profile pictures.

The “Zionist Spring” Facebook page took a more basic approach: rather than creating a new picture for “Sharon Epstein,” the page administrators simply used the first photo that appears in the Wikipedia entry on human image synthesis, which is provided as an example of the technology. The description of the photo states that it is from a website called “This Person Does Not Exist.”

Amid the growing anti-Netanyahu demonstrations in Jerusalem and the prime minister’s drop in the polls, further fake confessions appeared on “Zionist Spring,” such as that from “David Smolansky” — another made-up person, judging by the name (“smolan” in Hebrew means “leftist”). Like “Sharon Epstein,” “David Smolansky” also identified as a leftist until his shock at the alleged incitement against Netanyahu turned him into a supporter of the prime minister. His profile picture, too, was created by the website responsible for the picture of “Sharon Epstein.” Evidently, however, the technology in this instance didn’t work as intended — the tip of a third ear is visible on the side of “David’s” head.

A third fake story on “Zionist Spring” came from “Dana Overlander.” As with the previous posts, “Dana’s” testimony is characterized by a sense of disillusionment and an effort to arouse feelings of remorse and doubt among left-wing protesters. 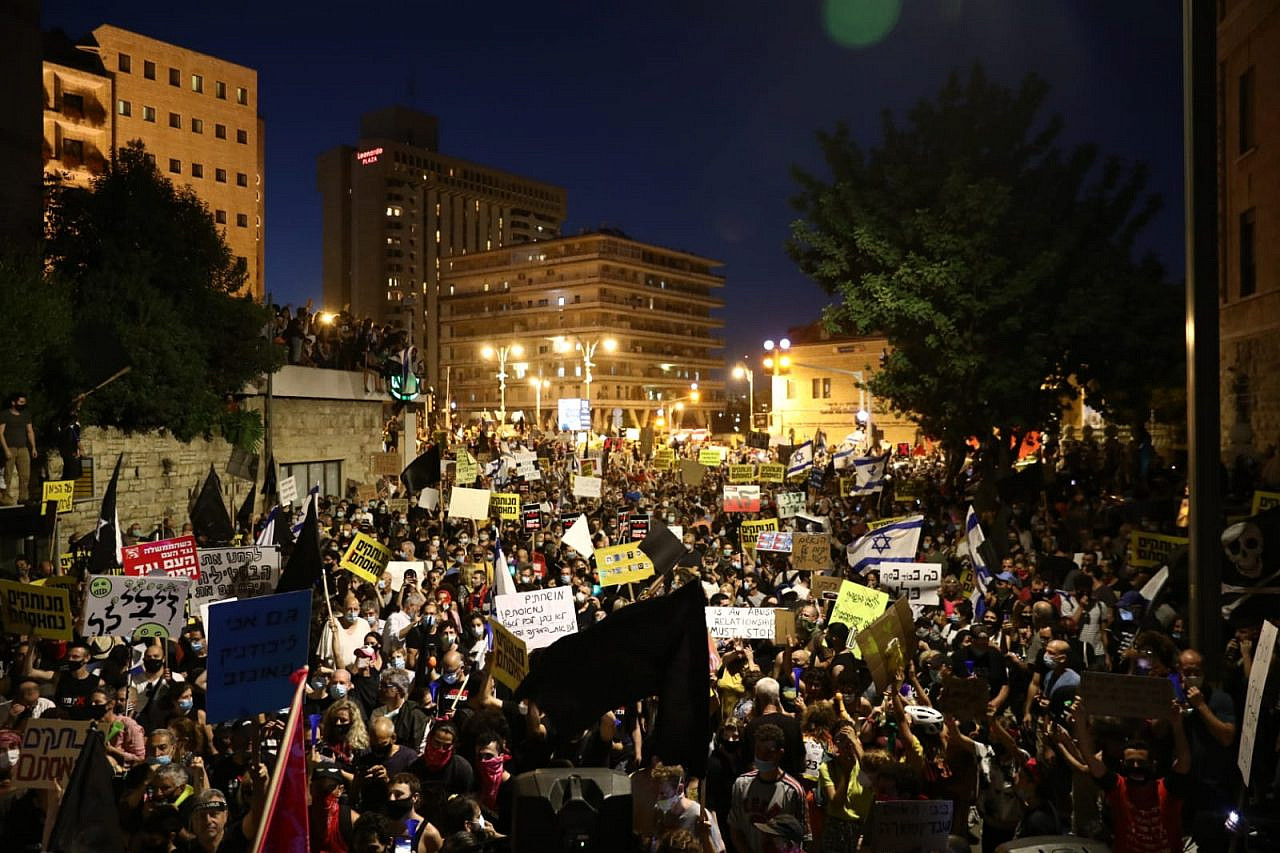 Thousands take part in a mass demonstration outside the Prime Minister’s Residence in Jerusalem, demanding Benjamin Netanyahu step down over his corruption scandals, July 14, 2020. (Oren Ziv)

“I’m disappointed in my [political] camp,” “Dana” wrote. “I’ve demonstrated in favor of peace all my life, and I’ve always voted for the left — from Labor-Meretz to Yesh Atid. I’ve always gone to demonstrations in support of peace, tolerance and equality… We’ve crossed a red line with the recent protests, which are primarily harming us, the left… I long for the left-wing leaders from Israel’s past, what do we have left besides hatred?”

“Dana’s” testimony has been shared on Facebook over 3,000 times. The profile picture accompanying it, which has some similarities with that of “Sharon Epstein,” does not appear anywhere else on the internet. Nor, in a comprehensive search of Twitter, Facebook, Instagram, and open online databases, does an Israeli woman with the name “Dana Overlander” appear.

“Zionist Spring” is a propaganda page that has been aggressively sharing Netanyahu’s Facebook posts alongside those of propagandists who have been an official part of the Likud’s election campaigns, well-known Netanyahu supporters, and Yair Netanyahu, the prime minister’s son. It is therefore clear why the page managers ignored comments on the posts published by supposed lapsed leftists, which pointed out that the people in question did not actually exist.

One of the fake testimonies was shared by an unofficial fan page of the far-right Israeli news outlet Channel 20, whose managers and followers attached little importance to the fact that the posts were fictitious. “It’s being shared online. Why does its origin matter?” wrote one commenter. In a separate comment, one of the administrators for the Channel 20 fan page wrote: “Before uploading this post I also couldn’t find a profile under this name. It doesn’t change the fact that [the testimony] is right, and that the Zionist left in Israel has disappeared and is even smaller than the loony left. A significant number of people on the left have said the same thing, so even if this person is fake, what’s written is spot on.”

It is unclear who is behind “Sharon Epstein,” “David Smolansky,” and “Dana Overlander,” nor the “Zionist Spring” Facebook page. The supposed administrator of the page, who goes by the name Uri Tzvi, did not respond to a request for comment.

Within hours of the publication of this story on the Seventh Eye on August 8, the “Zionist Spring” Facebook page disappeared from Facebook, along with Tzvi’s profile. It is not yet known whether the page was deleted by its manager or removed by Facebook.

Nonetheless, fake social media initiatives are not an isolated phenomenon in Israeli politics. A few days ago, media consultant Yossi Dorfman exposed as fake a number of “left-wing” profiles on Facebook — since removed by the site — posting alleged incitement against Netanyahu, intended to portray those protesting against him as violent.

Dorfman also revealed that a profile by the name of “Dana Ron,” which Netanyahu complained had published a call to murder him, was fake. That profile, too, was removed by Facebook. A police investigation into the post revealed that the account was being managed from outside Israel, although they have not yet ascertained by whom.

This wave of fake social media posts comes on the back of previous fictitious propaganda posts in support of Netanyahu. Two months ago, a series of fake testimonies by apparent pro-Netanyahu figures spread on social media, accompanied by photos of American celebrities.

In April, Yair Netanyahu and far-right activist and Otzma Yehudit leader Itamar Ben-Gvir both shared a photo of Muslim worshipers on the roofs of buildings — purportedly in Israel — in order to try and incite against the Palestinian public. The photograph was actually taken in Dubai. Prior to that, Yair Netanyahu had shared a photo supposedly of violent riots in Jaffa, which had been taken several years ago in Wadi Ara. And last year, during the second of Israel’s three recent elections, in an attempt to urge right wingers to go out and vote, he posted a photo allegedly showing a line of Palestinian voters waiting to cast their ballot — a picture that was actually of voters in Turkey.

A version of this article was originally published as two separate pieces on The Seventh Eye. Read them here and here.