The lethal attack on an Egyptian military outpost, in an attempted incursion into Israel, is another reminder of the terrorist infrastructure in the Sinai Peninsula. This infrastructure was built in part on the basis of the Gaza-Egypt-Israel smuggling industry, which is fueled by the massive restrictions on movement and trade imposed on the Strip by Israel and Egypt. 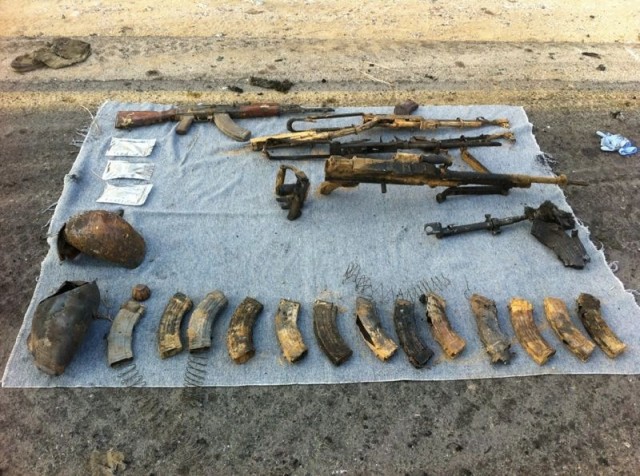 Some of the weapons carried by militants in infiltration attempt, August 6 2012 (photo: IDF Spokesperson)

On Sunday evening, terrorists attacked an Egyptian military outpost in the Sinai Peninsula, near the Rafah and Kerem Shalom border crossings, connecting Egypt with the Gaza Strip and Israel respectively. Fifteen Egyptian soldiers were killed in the attack, in which assailants seized two armored vehicles and attempted to infiltrate Israel. One of the vehicles was destroyed by a detonation of the explosives loaded on board; and the other was destroyed by the Israel Air Force, preventing the planned incursion. The attack was probably carried out by a global Jihad group, and was denounced both by the Egyptian government and by Hamas, which controls the Gaza Strip.

This attack is yet another reminder of the dangerous situation which has evolved in the Sinai Peninsula. Conquered by Israel in the 1956 and 1967 wars, and returned both times (in 1957 and following the Camp David peace accord with Egypt in 1979). The peninsula is a desert, three times larger than all of Israel, inhabited by about half a million people, many of them the traditionally pastoral Bedouin. In recent times, it has turned into a popular tourist destination, including for some Israelis.

However, over the last decade, it has also increasingly become a hotbed of terrorist activity. This development has to do with the area’s basic features (poor, largely empty, hard to navigate, international tourists as lucrative targets). But the ongoing crisis in the Gaza Strip is likely to have been a major trigger for the last decade’s deterioration.

The Strip, which borders Sinai, is much smaller, more isolated, and holds less sentimental attachment for Jewish Israelis than the West Bank. As a result, it has always been at the forefront of Israeli efforts to “separate” themselves from the Palestinians. Gaza was one of the first places where Palestinian population centers were evacuated by the IDF under the Oslo Accords, in 1994. It was fenced by Israel long before the West Bank wall, and the final permanent Israeli land presence in the Strip ended when its settlements were evacuated from Gaza under the 2005 disengagement plan. This led to a further tightening of the closure on Gaza – the massive restrictions imposed by Israel on land, air and sea movement of people and goods to and from the strip. The situation worsened further in 2007, when Hamas took over the strip, and the Egyptian government joined the blockade, largely shutting down the Egypt-Gaza border (the 2009 Israel-Gaza War certainly did not help, although the blockade was slightly loosened following the Gaza flotilla and the political upheaval in Egypt).

The distress created by these restrictions has led to the rise of an immense smuggling industry, mainly with the Sinai Peninsula, heavily reliant on its Bedouin population (and some of their fellows in the Israeli Negev, which border both Egypt and Gaza). This industry specializes in moving goods through tunnels and gaps in the fence, not just between Gaza and Egypt, but in the entire Gaza-Egypt-Israel border triangle. Although this mainly involves civilian goods, plenty of weapons flow through this trade, which has also been boosted by drug and human trafficking (of migrants and refugees) along the Israel-Egypt border.

Sinai, increasingly flooded by criminal activity and weapons, combined with the basic features mentioned above, has become a magnet for terrorist organizations, both Palestinian and those affiliated with global jihad. Major attacks on the peninsula occurred in 2004 (37 killed), 2005 (88 killed) and 2006 (23 killed) and another one was foiled by Egyptian security in 2009: all mainly targeting tourists, many of them Israeli. Last year, seven Israelis were killed in the southern city of Eilat, in a cross-border attack emanating from Sinai. In the last two years, there have also been a string of 15 attacks on the pipeline carrying natural gas from Egypt to Israel.

Israeli is attempting to build yet another fence, this time along the Israeli-Egyptian border (joining those in the West Bank, Gaza and Lebanon; and soon to be joined by an Israel-Jordan fence). But as previous experience – and the pipeline itself – indicate, it is impossible for Israel to solve problems with other people in the region by sealing itself off from them. This latest attack is also another reminder of the dangerous regional spillover effects from policies on the Palestinian issue in general, and Gaza in particular.