An open letter to the president of the Council of the EU: Don’t give us any more money to pay for the salaries and air conditioners, not in Tel Aviv and not in Ramallah. As far as I’m concerned, my Horizon 2020 is stuck underneath some house in Gaza that collapsed atop all of its inhabitants from an Israeli missile strike. 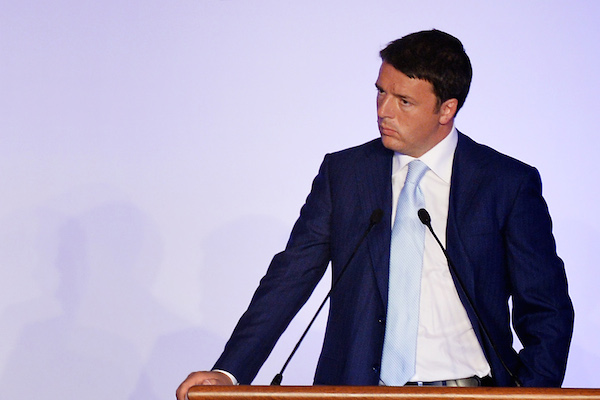 Matteo Renzi. (Photo by the EU)

I regretfully inform you that the citizens of the State of Israel have completely and officially lost their minds. It is pathological. Regrettable news, indeed.

It happened not too long ago. We saw a deterioration or two earlier, of course. But ever since they spent three weeks looking for three bodies in an operation very movingly described as “Brothers’ Keeper,” they completely lost it. And after that? Protective Edge. I’m telling you, Israeli society has lost it.

Yes, saw it coming. There were warning signs. Thank you for the commiserations. Yes, it is official: the situation is terminal and incorrigible. It is over. Don’t try to talk to anyone here; they don’t recognize anybody. And don’t tell them I spoke to you; they’ll come up with some law that bans meetings with foreign prime ministers without the expressed approval of Foreign Ministry spokesperson Yigal Palmor.

No, really. You have nothing to do here. They’ll say that you punched Avigdor Liberman in the back and everybody will buy it. Let me remind you of our lovely bearded friend, German EU Parliament President Martin Schulz’s speech at the Knesset in Jerusalem. He made the mistake of momentarily mentioning a young man who told him something during his visit to Ramallah, and that was it. He completely burned himself with that. That’s how it is over here now. In German, no less!

To make a long story short, It’s gone to hell. We’re completely helpless. That which we have dreaded has finally come. Death has its own government. However you want to put it. Poems can be written about it. “Breaking the Silence” will publish it in a special edition translated into French and Italian even before Christmas as a solemn and nostalgic holiday gift book for an entire generation of Europeans who once dreamt of volunteering here in some Kibbutz. It was before I was born. The fancy book will have a special foreword by Stephane Hessel, rest in peace. And probably a picture or two of Rabin and Arafat. Both of whom are dead already. There will be beautiful black-and-white images of freckled, red-headed leftist girls in the center of Tel Aviv with well written signs in Arabic standing by three cops. Yes, it’s lovely, Very romantic. Very Sophie Scholl. But it doesn’t really help now. So listen to me for a moment, before they see me here in the building. They’re everywhere, you know. Thousands of operations per month.

We don’t want your money

I’m wasting my time by trying to convince the Israeli government. You don’t think I’ve tried? All they’ll do is sic the cops and secret police on me, frame me, and pull out all the stops in grandstanding political trials. You know how it goes. So dear Mr. Italian prime minister, all your aides and advisors shan’t tire me any more than I am fatigued and exasperated right now. I’ve got nothing to lose.

We need a responsible adult. You know how it is – learning to kill is a matter of habit. It doesn’t matter right now who started it and why. There are many books on the topic; roughly one every passing week. Forget about it right now; I don’t have the time. Netanyahu is already creeping up my back. I beg of you, as the current president of the Council of the EU, do impose upon us a political solution. Not back to negotiations or anything like that. Impose a political solution.

Did you hear of the Dayton Agreement? That’s the agreement that was imposed upon Yugoslavia by the international community to end the horrendous civil war that was raging there. You know how long the negotiations were? Twenty-one days; I checked. And here, peace negotiations have gone on since I was a high school student. Tell me, are you kidding us?

No, really. Do something. Look at what’s going on here. I’m sick of all of your nice statements about ending the “cycle of violence” and all of that, and going back to the negotiation table and all of that. I’ve just had it with you. You come here to meet us, ye knights of civil society. You nod, you encourage, you finance the offices, the salaries, the printing of reports on glossy paper. And I’ve had it. I’ve had it with all of your reports, with dulcet legal English about human rights and international treaty violations with plenty of footnotes. You come, write the report, and go back to your homes. To the Metropolis. To beer and football. Oh, and what football it is!

So listen to me for a minute, Mr. Renzi. I know you have nothing but good intentions, really, but I’m a little sick of it. It’s just not helping here. Don’t come. We’ll send you an email with an attachment. We’ll meet at the UN Security Council. No, really, forget about it. Real friends don’t let their friend commit war crimes and crimes against humanity and ethnic cleansing without doing anything. A good friend does not come to visit, see you burning kids in wholesale, not just one or two, and then says nothing because it’s uncomfortable. The rockets here are also unpleasant! And explosions in buses and restaurants are unpleasant as well. And fascist neo-Nazi movements are unpleasant too, believe me. And if Sayed leaves, then Uzi Bar’am will leave, and then his son, and then Rogel Alpher, and then there’ll be no one left. Either help us out of this mess, or just leave us alone.

Don’t give us any more money to pay for the salaries and air conditioners, not in Tel Aviv and not in Ramallah. And don’t cover our travel expenses abroad; leave us be. We’ll manage in the heat, without an office and without A/C. And without flights to all of those conferences of yours. That’s it. We won’t clear your conscience anymore. No more peace conferences in Tel Aviv or elsewhere. And no more cooperation with the Israeli government. In any field. As far as I’m concerned, my Horizon 2020 is stuck underneath some house in Gaza that collapsed atop all of its inhabitants from an Israeli missile strike, and that’s where my horizon is until further notice.

In short, Mr. Renzi, they are all mad here, and I’m asking you to step in immediately. That’s it. I said my piece. Now you know how it is here and you can do what you want with the information. You have 21 days.

Yoav Shemer Kunz is a PhD candidate in Political Science in Strasburg and Amsterdam Universities. He is also an expert on the EU’s relationship with Israel and Palestine. He is 35 years old and a Jerusalem native. This article was first published on +972’s Hebrew-language sister site, Local Call. Read it in Hebrew here.

Related:
How will the EU elections affect Israel-Palestine?
Growing European involvement in the conflict
Why the EU needs to rein in Israel’s settlement policy