The activists were protesting what they called the Israeli government’s cynical exploitation of the LGBTQ community to appear liberal and progressive and cover up its violation of Palestinians’ human rights in Gaza and the West Bank. 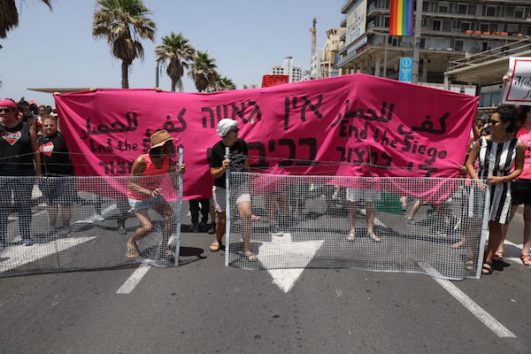 Several hundred LGBTQ activists briefly blocked the path of the Pride Parade in Tel Aviv on Friday. The activists said they were protesting the Israeli government’s use of the LGBTQ community to cover up its discriminatory and racist policies and the maintenance of the occupation of the West Bank and siege of Gaza.

The activists voluntarily dispersed when police declared it an illegal demonstration.

The demonstrators claimed that the Israeli government is exploiting the LGBTQ community to present itself as liberal while violating the rights of Palestinians in the West Bank and Gaza. The anti-pinkwashing activists said they wanted to remind the Pride Parade participants that while they were celebrating and demonstrating in Tel Aviv, those demonstrating in Gaza at the same time were risking their lives.

“We came here to protest against the cynical exploitation of the LGBTQ struggle for the good of the Israeli government’s crimes, which is why we came with a fence,” said Tamar Ben David, one of the demonstrators. “While we’re demonstrating here, just a few kilometers away [Israeli soldiers] are shooting people exercising the right to protest.”

“Our struggle as LGBTQ people is not disconnected from the struggle for the rights of others,” Yuli Novak said. “In every struggle that celebrates freedom and liberation, we will be here to [protest] the crimes committed in our names.”

An estimated 200,000 people participated in Friday’s Pride Parade, including members of the LGBTQ community, family members, and supporters. 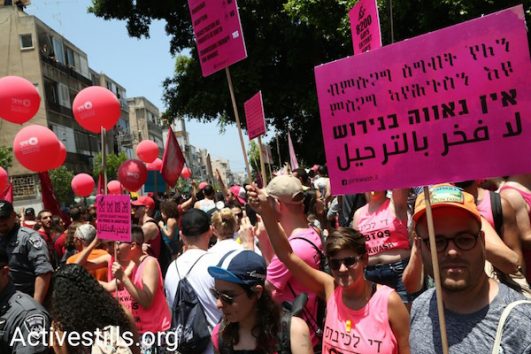 Below is the full text of a flyer activists handed out to participants during the march.

We don’t want to bring down the mood, we swear. We are queers who want to celebrate our amazing identities and struggle for our rights together. But not at the expense of the rights of others.

The Israel government is exploiting us to appear liberal and progressive, while violating the rights of Palestinians on a regular basis — this is called pinkwashing. The government markets Tel Aviv as a city of freedom, and yet 70 kilometers away from here there are two million Palestinians jailed in Gaza. The army says its gay friendly, but it uses intelligence information gathered about Palestinians’ sexual orientation as blackmail.

Rights are for everyone. We are speaking about the right to marry, while the government prevents family unification between Israeli citizens and Palestinians who live in the West Bank or Gaza. We are struggling for the right to be registered as the parents of our children and raise them in our houses while hundreds of Palestinian children sit in Israeli jails.

Political protest is the heart of the Pride March. Pride Month is celebrated in June to commemorate the Stonewall Riots when LGBTQ people protested against the oppression and persecution of the community. They were not civil, they were not polite, they rose up.

Palestinians also have the right to protest, but since the beginning of the Great Return March in Gaza, more than 100 demonstrators have been killed. As members of a community that is still fighting for full rights and equality, we will not be silent in the face of human rights violations and repression of the freedom to protest. We will stand in solidarity with the Palestinians living under occupation and under siege. We oppose pinkwashing. We are proud of who we are, and we are shouting — there is no pride in occupation.