By banning the burkini, the French view themselves as the ones liberating veiled women from Muslim patriarchy. Instead they are only imposing a different form of oppression. 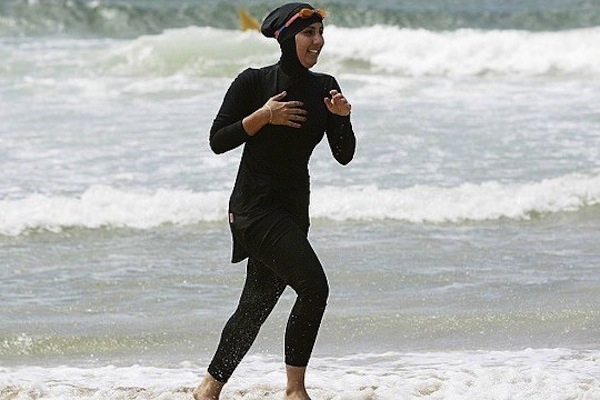 Illustrative photo of a woman in a burkini. (bellmon1/CC BY-NC 2.0)

The images of French policemen handing out tickets to Muslim women in religious garb on the beaches of Nice this past week reflect a depressing interpretation of the essence of democracy and freedom of religion in the West, and specifically France. Under the guise of “women’s liberation” and secularism, France’s elected officials are trying to limit the presence of Muslim women in the public space by establishing guidelines for how women must undress when they go to the beach.

French legislators are ostensibly telling themselves and their voters that denying Muslim women from wearing burkinis was established n order to promote women’s liberation, and that the burkini itself is a symbol of the Muslim world’s patriarchal oppression (regardless of whether these women are immigrants or French born). French politicians, therefore, believe they are doing right by telling Muslim women: “liberate yourselves” says the French Republic, “liberate yourselves and reveal your bodies. You are no longer in the Middle East, you are in Western Europe, where no one can tell you how to dress or how to act.” Or in the words of French Prime Minister Manuel Valls: “The burkini is not compatible with the values of the French Republic.”

One must ask, however, whether liberating women from the veil, hijab, or burkini is itself an act of feminist liberation? Shouldn’t the progressive, enlightened West give women the right to choose whether to cover up or undress?

Of course arguments about religious freedom— or freedom from religion, as the secular French Republic prefers to view it — are a metaphor for the burkini itself: they cover up the racism of France’s legislators towards the Muslim communities of Europe. After all, photos of nuns enjoying themselves at the beach in full dress are and will continue to be prevalent across Europe. If so, why do we not ask France’s lawmakers to fine nuns in the name of secularism? Perhaps freedom of religion in the West only applies to certain religions — and specifically to the religion of the majority, even if that majority is secular.

The arguments against the burkini as a tool of oppression reflect the fact that France and Europe in general — even after dozens of years of Muslim presence — are still tainted with prejudices toward their Muslim citizens. Along the way, we miss the fact that democracy is supposed to include the concept of pluralism — not just one variety of white, liberal secularism.

Looking for the feminine beauty ideal

The controversy over the burkini ban gives us an interesting glimpse into how the West views the fundamentals of democracy — a kind of test that allows us to understand not the limits of permissiveness, but rather who exactly benefits from freedom of worship and who falls victim to the West’s “enlightened” patriarchy. Camouflaged as freedom from religion, French authorities impose a secular lifestyle not only on its communities, but on the individual as well. As always, women are the first to pay the price for cultural oppression. French politicians, like many of their counterparts in Western countries, view the burkini (as well as the hijab) as a symbol of oppression of Muslim women. By banning the burkini, the French see themselves as the ones who are liberating the Muslim woman from Muslim patriarchy.

It seems that in cases in which Muslim women demand the right to wear whatever they want, the West (France may be the most prominent example, but this happens in Germany, Britain, and the United States) shows Muslim women that that women’s liberation has only one shape and form. Not only does this not align with women’s liberation, it only expresses another form of male oppression, an oppression which requires women to shave their body hair and demands that they remain thin and toned. Using Western beauty standards, Europe’s racists seek to exclude Muslim women from the public space.

Make no mistake about it: the Muslim world suffers from severe chauvinism, the kind we would like to hope doesn’t have a place in the 21st century. But if women’s rights are truly a priority for the burkini banners, they better show the world that freedom of religion is a basic right in a democracy — that freedom of religion is a woman’s right as much as it is a civil right.

It is sad to discover that even in 21st century Western Europe, the right of women to express themselves, their beliefs, and their rights to their body are at the mercy of the male lawmaker.

Eiad Shalabne received his bachelor’s degree from Ben-Gurion University and his MBA from University of Colorado Boulder. This article was first published in Hebrew on Local Call. Read it here.