Why is it that neither the debate host nor the heads of the other political parties stopped the foreign minister as he alluded to the expulsion of one out of every five Israelis? 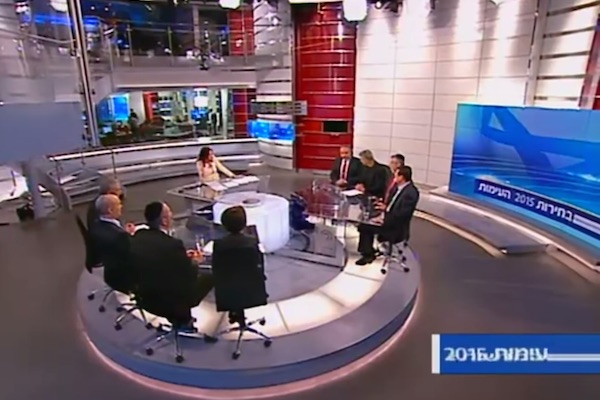 When does staying silent become collaboration? Last Thursday, Channel 2 hosted a debate between the heads of all the major parties (aside from Netanyahu and Herzog). During the debate, Yisrael Beiteinu leader Avigdor Liberman directed some pretty harsh language against Joint List head Ayman Odeh.

Liberman claimed that Odeh and his friends in the Joint List represent terrorist organizations and said they should be put on trial for incitement and sedition, in light of Odeh calling on young Arabs not to participate in Israel’s national service. When Odeh remarked that Arabs represent 20 percent of Israel’s citizens, Liberman responded, “for now.” Liberman continued referring to Odeh as a “fifth column” throughout the debate.

The following day, host Yonit Levy received much praise over her ability to keep the debate orderly and navigate a complex situation under previously-established rules. However, in the moments of truth, Levy remained almost entirely silent. It was close to the end, when every party head got the chance to ask another a question. Liberman used his time to turn to Ayman Odeh (without mentioning his name) and ask him the following questions:

Why are you in this studio rather than a studio in Gaza? Why are you running for the Israeli Knesset instead of being elected in Ramallah? Why are you even here. You are not wanted here. You are a Palestinian citizen, you identify as Palestinian, so go to Abu Mazen [Mahmoud Abbas] — he will pay your salary, your unemployment benefits, your convalescence, your laziness benefits.

Despite the fact that the party heads interrupted one another constantly, when Liberman told Odeh, “you are not wanted here,” no one cut him off. Not Meretz chairwoman Zehava Galon (who condemned Liberman’s words later on in the debate), not Yesh Atid leader Yair “Zoabis” Lapid, not any of the other six Jewish elected officials who took part in the debate. No one said “stop it.” No one made clear that such rhetoric is unacceptable. The only person who responded to Liberman was host Yonit Levy, who only mae a factual correction: “He is an Israeli citizen, Mr. Liberman.”

Factual corrections are simply not enough in this case. In effect, Liberman called for expelling Odeh and his voters from Israel, and Levy did not even respond with a polite rejection, something along the lines of: “He is wanted here, we invited Ayman Odeh and we are happy that he came to the debate.” Liberman undermined the very basis of democracy on national television, and received only a limp response. Do we really need to imagine the prime minister of a European country telling the head of a Jewish party that he or she is “not wanted here” in order to understand how grave Liberman’s statement was?

Another debate is set to take place soon on Channel 1. If Liberman repeats those kinds of statements, the heads of the other parties will an opportunity to repair the impression they left in the last round, and defend Odeh’s right, and the right of his supporters, to continue living as Israeli citizens. If Liberman says “you are not wanted here” to the head of the Joint List, host Yaacov Eilon will have the opportunity to maintain a bit of the Israeli media’s respect, to stop the head of Yisrael Beiteinu and put him in his place.