Liberman’s proposal to cure Palestinian citizens of their ‘split personality’ violates pretty much everything democracy stands for.

It’s not clear what prompted Liberman to release the plan at this moment – campaign considerations, a brief drop in attention as the “Jewish Nation-State Law” took center stage, or a distraction from Israel’s deteriorating foreign relations as yet another European parliamentary debate on Palestinian statehood was held on Friday, this time in France. 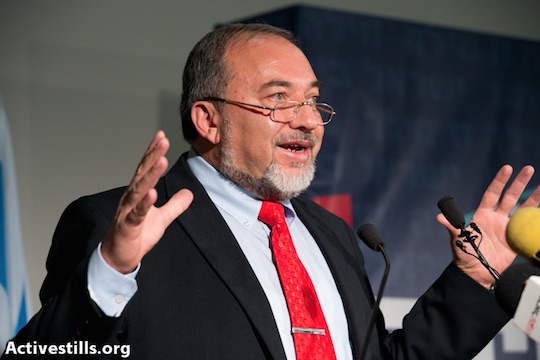 But there is nothing new about it for Liberman, who has been pushing his principles for at least four years now. It is not a shift in any political direction. The best that can be said is that it is easy to explain: two states along 1967 lines, and Israel annexes large settlement blocs. The kicker is Liberman’s key condition of “moving boundaries,” such that large swaths of land populated mostly by Palestinian-Arab citizens of Israel would become part the Palestinian state.

… the arrangement must include the land and population exchange plan. The arrangement…will allow Arab Israelis who do not identify with the State of Israel to become part of the Palestinian state. This will solve… the problem of Arabs in the Triangle and Wadi Ara…who can become citizens of the Palestinian state without leaving their homes, and it will also allow the Arabs in other parts of Israel, such as Jaffa, Acre, etc., who feel they are part of the Palestinian nation, to solve the problem of dualism and “split personality” they suffer from. They will be able to decide… If their identity is Palestinian, they can give up on their Israeli citizenship and become citizens [of Palestine]. The State of Israel must even encourage them to do so through a system of financial incentives.

It is not totally clear whether Arabs in the Triangle or Wadi Ara will be given a choice, or if they will be summarily de-patriated. It is not clear whether they will be allowed to have dual citizenship, although based on the statement about Arabs of Jaffa it seems not. Maybe the most concrete innovation in this version is the generous offer of financial incentives for Arabs to leave Israel.

It shouldn’t need to be said to anyone representing any democratic country, that stripping citizenship as a collective policy, from people who have committed nothing resembling a crime such as treason, violates pretty much everything democracy stands for. No Jew or human being can accept that citizens are a problem to be solved. Jews were once also considered a “problem.”

Worse: the program targets those who have been the shoved to the margins of Israeli society for 66 years. Now they could be forced out altogether. The plan embodies what is perhaps the nastiest racist expression in the Hebrew language, loosely translated as: “The ‘n’ has done his work, the ‘n’ can go now.”

Perhaps some outsiders see Liberman’s ethnic separation as a neat solution to the Gordian Knot of hostile, intertwined populations. Maybe hard two-staters are relieved to consider a counterweight to the relentless mixing of populations in the West Bank and East Jerusalem that is such an obstacle to the two-state plan.

But let’s get this straight: Palestinian citizens of Israel are not an obstacle to peace. That’s an absurd, fabricated connection. They are, however, a dynamic, integral, and vital part of Israeli life. They hold a mirror to democracy here and remind us to do better, by organizing and demanding rights as any dignified human being must. They are part of the rich culture, religion and heritage and humor of the country. They love this land fiercely and they share that with Jewish Israelis.

If this sounds like a patronizing defense of Arabs in Israel – it’s not. It’s a plea to Jewish society to save Israel from rotting inside by pushing everyone else out. To cure itself from the fallacy that isolation and manufactured homogeneity are healthy.

Apropos homogeneity, there is a larger, historic reason Liberman’s plan is wrong. Renowned international relations scholar Barry Buzan once characterized (I paraphrase) Israel as a tragic product of 19th century political currents, that emerged just as those worldviews were losing legitimacy as political movements. He was referring to the political projects based on industrialization, rational state-building and ideologies of enlightened progress – and their accompanying “dark side” of dispossession and domination.

Similarly, I would argue that the days, or the myth, of national sameness are over. The earth’s people are moving around in staggering, record numbers. Call the world flat, global, interconnected, wired; countries are less homogeneous than ever and many are going through the pains of redefining identity.

Yet Liberman continues to build Israel out of the ashes of failed notions of the past, namely ethnic isolationism. He sells the idea that with the right formula, Israel can remain homogeneous, as if that’s a good thing. He presents it as condition of survival, when in fact it is an ingredient for destruction.

“Israel cannot accept raising a black flag on Independence Day, or not respecting the siren on Memorial Day,” he writes. Really? Has the U.S. crashed because some people watch fireworks on the Fourth of July while others do not? Will his declaration stop foreign workers and migrants from putting down roots here? Will it prevent Israelis from marrying foreigners, or from Jews marrying Arabs?

Instead of embracing the diversification of Israeli society that is already happening – a beautiful thing, actually – Liberman is essentially saying: your fulfillment lies in sameness and solitude. “A rock feels no pain, and an island never cries,” wrote Paul Simon. But they are words of mourning.

All the start-up-nation success in the world won’t save a society that can’t face itself.

Related:
Liberman: Citizenship annulment is a condition for peace
The ‘Jewish Nation-State Law’: Turning liberal Zionism on its head
For Palestinian citizens, nothing but contempt and rejection for Liberman plan