Just one day after 950 asylum seekers drown on their way to Italy, Israel’s transportation minister praises the government for preventing migrants from entering the country.

Transportation Minister Yisrael Katz (Likud) sees lessons for Israeli policy in the tragic massacre of 700 asylum seekers who drowned when their vessel capsized on Sunday in the Mediterranean Sea. Posting a photo showing rows of corpses brought to shore by rescue workers, Katz wrote the following caption, which is translated here from Hebrew:

“Hundreds of migrants from Africa drowned to death close to Italy in a disaster that horrified all human beings. Europe is having a difficult time dealing with the migrants, and with creating solutions for this difficult issue. While there are differences between us (the migrants traveling to Europe must cross a sea while those heading for Israel have a direct overland connection), you can see the rectitude of our government’s policy to build a fence on the border with Egypt, which blocks the job-seeking migrants before they enter Israel. The elections are over — you can give us some credit now.”

Katz seems not to remember some basic historical information about events leading up to and immediately after the Holocaust. When Israeli and Jewish schoolchildren around the world are taught about the Shoah, one of the most-emphasized points is that the Jews trying to escape the Nazis were denied refuge by nearly every country in the world. And that the Nazi regime felt it had carte blanche to carry out its genocide because the world had demonstrated its indifference to the fate of the Jews. They are taught about the 1938 Evian Conference, initiated by Franklin D. Roosevelt, which brought together representatives of 32 states for over a week in that Swiss resort town to discuss the possibility of taking in more refugees from Germany and Austria, which were then the only two countries under Nazi rule. But none would agree to expand their quotas. After the war, Jewish survivors of the death camps who tried to make their way to Palestine by boat were turned away and forcibly interned by the British army on the nearby island of Cyprus. This episode of recent Jewish history was immortalized by the 1947 story of the refugee-filled ship Exodus, which Leon Uris tells in novel form and Paul Newman acts in heroic form.

The comparisons I am making are so obvious that they should not need mentioning. They should be obvious to the government of Israel, and to Yisrael Katz specifically. We are a country that uses the Holocaust to justify its policies — even its very existence — but somehow politicians like Netanyahu, Katz, Miri Regev and others seem to believe that compassion begins and ends at home.

Katz demonstrates vulgarity and an almost pathological lack of compassion with his gleeful-sounding status, in which he makes political capital of a catastrophe involving the massacre of hundreds of human beings — including small children. He refers to the asylum seekers as migrants searching for work, which perhaps is not quite as bad as calling them “infiltrators,” “cancer” or “vermin,” as other members of his party have done. But it is bad enough, as it dehumanizes these people by implying that they are casually seeking to better their financial circumstances (subtext: at our expense), rather than undertaking unbelievably arduous journeys to escape extreme danger or a physically unbearable existence. Only a desperate person with nothing to lose would trek across the Sinai Peninsula, risking kidnapping and torture, or crowd onto a boat that is not seaworthy when hundreds have already drowned. 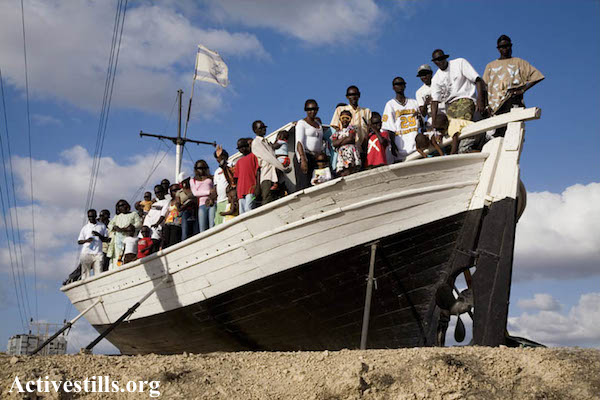 Over the past few years, Israel has treated the asylum seekers from sub-Saharan African very badly. It has refused to consider their refugee status, refused to grant them the right to work legally, imprisoned them and deported them by force. In one infamous incident that took place two years ago, the government ordered the army to physically prevent a group of Eritreans stuck between the Egyptian border and Israel’s newly-built fence from entering the country. For a week, Israeli media reported on the group, which included a pregnant woman, as they sat under the scorching desert sun with neither food nor shelter — just a tarp and “as little water as possible.” Soldiers and police officers  prevented aid workers from bringing them food and even prevented a doctor from Physicians for Human Rights-Israel from examining them. Ultimately, the pregnant woman and child were allowed in. As for the others, soldiers physically dragged them back to Egypt.

Israel is not the only country to treat asylum seekers badly. In Europe and in the United States, governments dither over refugees because right-wing, populist and racist opposition politicians have put them on the defensive. But in Israel those right-wing, populist and racist politicians are the government. They are not the opposition. And that, rather than geography, is the tangible difference between the “us” and “them” that Yisrael Katz refers to in his Facebook status.