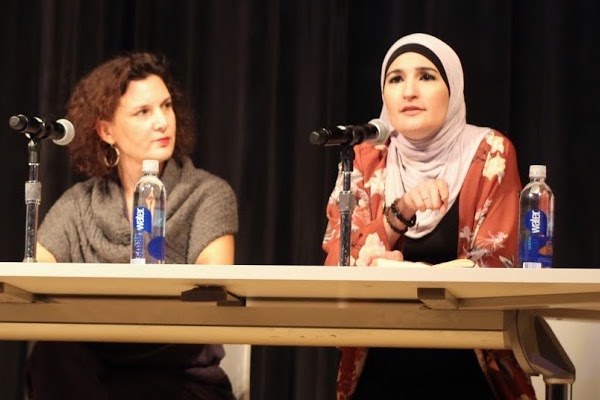 In the end, the controversy, threats, protests and endless scandalized op-eds were unable to derail a diverse, progressive panel on anti-Semitism that took place in New York on Tuesday evening. The event, held in front of 500 people at the New School (with a further 1,200 watching via a livestream) was moderated by Democracy Now’s Amy Goodman, and featured Linda Sarsour, Jewish Voice for Peace Executive Director Rebecca Vilkomerson, Leo Ferguson and Lina Morales.

The panel, a collaboration between Jewish Voice for Peace, Jews for Racial and Economic Justice (JFREJ), Haymarket Books and Jacobin Magazine, drew out the complexities of acknowledging and challenging the genuine threat of anti-Semitism from diverse sources, while simultaneously rejecting its exploitation for political gain. In a wide-ranging discussion, the panelists addressed, among many other issues, the intersection of anti-Semitism and other forms of racism, anti-Semitism and anti-Zionism, and how anti-Semitism does and doesn’t differ from other forms of racism.

The ferocious opposition the event provoked was primarily due to the presence of Sarsour, who is unceasingly smeared as a Jew-hater, despite consistently speaking out against anti-Semitism, and being a long-time partner of Jewish social justice organizations in New York. Among those decrying her inclusion was Zionist Organization of America head Mort Klein, whose “J’accuse…!” on Breitbart, of all places, belied the fact that he had personally invited Steve Bannon and Sebastian Gorka to the ZOA’s annual pageant in New York earlier this month.

JVP Deputy Director Rabbi Alissa Wise, introducing the event, warned of potential interruptions, and she proved correct. But ultimately, a feeble protest outside the auditorium and a couple of minor audience disruptions at the end of the evening failed to reflect the storm of outrage that had threatened to overshadow the proceedings. 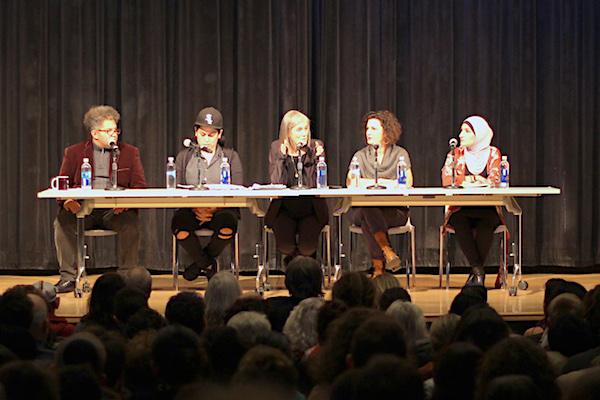 Instead, what took place was a nuanced, complex, challenging debate, among a panel whose racial, gender and religious diversity added considerable depth to the discussion. It was exactly the kind of conversation our communities on the Left need to be having, and seem to be increasingly willing to have in public: the event followed the publication earlier this month of JFREJ’s excellent primer “Understanding Antisemitism,” as well as JVP’s book “On Antisemitism: Solidarity and the Struggle for Justice,” published in April by Haymarket.

‘Because I care about Jews, I’m anti-Zionist’

Following Goodman’s opening comments and introduction of the speakers (with Sarsour receiving the loudest applause from the audience), Ferguson—a JFREJ community organizer, founder of the group’s Jews of Color Caucus and co-author of “Understanding Antisemitism”—noted the painful legacy of the history of anti-Semitism within Jewish communities, before calling out the exploitation of that trauma for political gain.

“[With] white nationalists in the White House and marching through the streets of Charlottesville, there is nothing more hurtful to Jews than intentionally confusing the issues by spreading false charges of anti-Semitism,” Ferguson stated, noting that in so doing, the Right “erodes our ability to accurately assess threats.”

Lina Morales, a Young Jewish Voice for Peace Coordinator and a member of the Jews of Color Mizrahi and Sephardi Caucus, which partners with JVP, highlighted the diverse forms that anti-Semitism can take. Commenting on internalized prejudice, she also cited the “danger of philo-Semitism,” wherein “a power structure loves Jews provided they do what that power structure wants them to do.” She also drew attention to the oppression faced by Mizrahi Jews in Israel, arguing that Zionism perpetrated “cultural genocide against Jewish communities that didn’t fit its blueprint for European Jewishness.”

Morales firmly rejected the conflation of anti-Semitism with anti-Zionism, declaring—in one of the most applauded statements of the night—“because I care about Jews, I’m anti-Zionist.”

‘Loving Israel does not mean that you love Jews’

Vilkomerson spoke forcefully about the current threat of anti-Semitism, while arguing that no one should have a monopoly on discussing the issue. Acknowledging she had been “truly terrified” by the footage from Charlottesville in August, she added that in her lifetime, “people who express support for anti-Semitism have never been so visible in the United States.” White nationalism, Vilkomerson said, has become part of the mainstream discourse—even as mainstream American-Jewish organizations have retreated from calling it out as such. 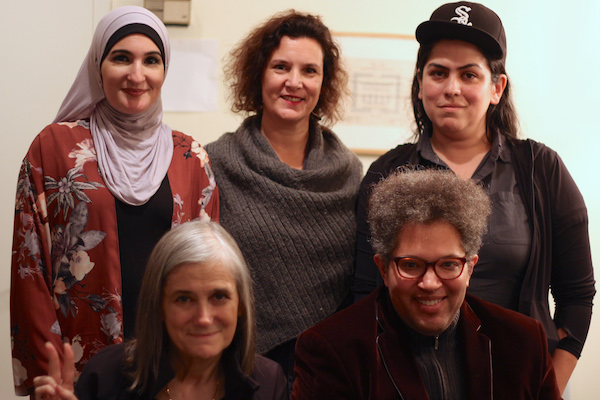 “I am angry about the hypocrisy of the institutional Jewish community,” Vilkomerson admitted, saying it has “traded its crucial responsibility to fight anti-Semitism…for support for Israel.”

Pointedly stating that the U.S. is witnessing a “virulent, Trumpist form of Zionist anti-Semitism,” Vilkomerson added that “if the past year has taught anything, it’s that loving Israel does not mean that you love Jews.”

Vilkomerson also addressed the attacks on Sarsour in the run-up to the event, noting that she “has proven herself to be an unflagging advocate for the rights of all people,” and criticizing the “Islamophobic worldview” that any Palestinian who criticizes Israeli policy does so from a place of anti-Semitism.

Sarsour, last to speak, picked up where Vilkomerson left off, drily expressing her bafflement at being “apparently the biggest problem for the Jewish community.” Defending her inclusion on the panel, Sarsour called it “a disservice to Jews” to frame the conversation about anti-Semitism as one that only Jews can participate in.

Pressing the need for an intersectional approach to fighting bigotry, Sarsour added: “We cannot dismantle anti-Black racism, Islamophobia, homophobia, transphobia and all the other types of phobias and ‘isms’ without also dismantling anti-Semitism… [It] is one branch on a larger tree of racism.”

Sarsour further called on activists to “never precondition your allyship,” arguing that if Zionists wanted to drive home the point that they are not all the same, they must “show up to the movement. Show up for Black lives…eventually people will ask you who you are and where you come from.”

Ultimately, she stressed, “we must all commit to dismantling anti-Semitism,” pointing out that the biggest existential threat came from the White House.

“We are now living under fascism,” Sarsour added, “and we need all hands on deck.”